Posted in: Developing Perspectives (May 2008)

Have you ever done the right thing for the wrong reason? When I explored the option of replacing the halogen bulb in my Electrix magnifying work lamp with LEDs, I was simply tired of singeing my knuckles when working on SMT components, and couldn’t find a compact fluorescent to fit the bulb socket. I was also looking for an excuse to work with the new high-intensity LEDs on the market. Of course, the ‘right reason’ to make the move would have been increased efficiency and an associated reduction in greenhouse gases. 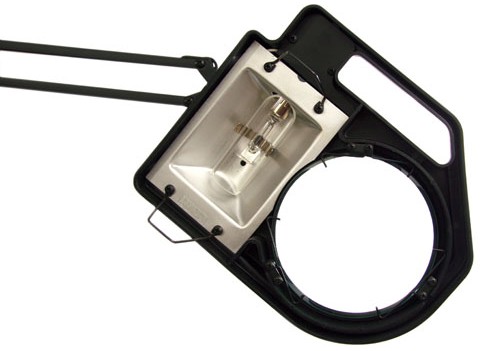 Figure 1 shows my work lamp before the LED modification. A 100W halogen bulb sits recessed in an aluminum reflector. Figure 2 shows the lamp after the LED mod, with four LEDs flush mounted on a 2 mm thick aluminum sheet.

Figure 3 shows the upgrade components — a 24 VAC output transformer, four high-power white LEDs, and a constant current supply. The LEDs are 05027-PW14, White High Current K2 Star LEDs, available from www.ledsupply.com. The $7.50 LEDs produce 100 lumens @ 1,000 mA at 3.85V, and a brilliant white 6,500K color temperature. The constant current supply is a 1,000 mA BuckPuck, also available from www.LEDSupply.com. Although both AC and DC supplies are available, I chose an AC model (03021-a-1-1000 - $15) because I had an extra transformer in my parts box. The BuckPuck accepts 7-24 VAC input and produces a constant 1,000 mA output. An added feature of this model is a trimpot output adjustment for varying the light intensity. 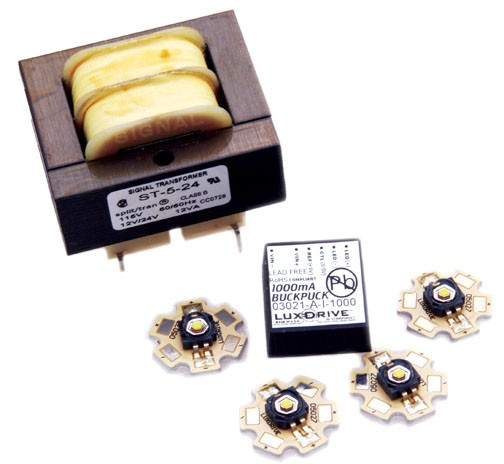 Wiring the LEDs is simply a matter of stringing the LEDs in series and attaching the appropriate polarity of the constant current supply to the string. I stuffed the transformer and constant current supply in the head of the lamp, in the space that was previously occupied by the indentation for the bulb in the aluminum reflector. The only downside to this arrangement is that the head is a bit heavier than before, and I have to tighten the tension on the supporting arm to keep it from drooping.

One of the challenges of maximizing the longevity of LEDs is avoiding high temperatures. For this reason, I elected to use a thermal epoxy (see Figure 4) to mount the LEDs instead of using hardware. Sold by LED Supply under the brand Arctic Silver Thermal Adhesive, the thermal epoxy ($13) makes short work of mounting the LEDs. The epoxy has a five-minute working time, and you don’t have to worry about drilling a dozen holes and possibly over-tightening a bolt and shattering an LED mount. With the thermal epoxy, the LEDs run warm to the touch, even after hours of operation. 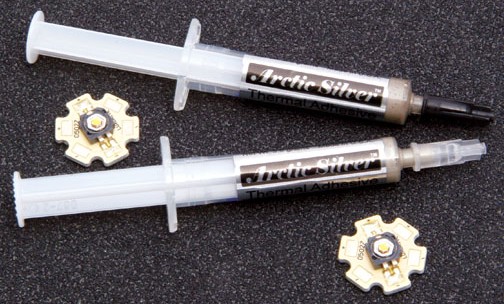 Using my Sekonic light meter, I determined that the light output is only about a quarter of original output with the halogen bulb. However, the lamp provides more than adequate illumination. In addition, it’s cool, the light is white, and I can work with the LEDs a millimeter from my hand in total comfort.

From a purely economic standpoint, the conversion was costly: $32 for the LEDs, $15 for the constant current supply, $10 for the transformer, and a scrap piece of aluminum. However, the LEDs will outlast several of the $25 halogen bulbs required by the original lamp design and consume significantly less energy. In addition, I now have a pure white light source that’s perfect for close-up video and still camera work.

Several years ago, I made the move from incandescent bulbs to daylight compact fluorescents, primarily for the white light, and I haven’t looked back. For many consumers interested in going green, LEDs, halogens bulbs, and compact fluorescent bulbs are becoming more popular as the price for these alternative light sources drops. Eventually, the move away from incandescents will be mandatory. According to a congressional bill passed in December 2007, traditional incandescent light bulbs will begin to be phased out in 2012, with a complete ban finalized in 2014. Under the measure, all light bulbs must use 25% to 30% less energy than today’s products by 2012 to 2014. The phase-in will start with 100-watt bulbs in January 2012 and end with 40-watt bulbs in January 2014. By 2020, bulbs must be 70% more efficient.

As illustrated by my lamp conversion project, the current limitation isn’t LED efficiency or lifetime, but the initial investment. LEDs are not yet universally cost- effective replacements for incandescents and compact fluorescents. However, in certain niche areas, the added cost is acceptable. A highly publicized conversion involves replacing the 160, 100W mercury vapor lamps on the Brooklyn Bridge in NY with 24W LEDs. The LEDs are supposed to last three times longer than the lamps and save 24 tons of greenhouse gases per year.What niche areas of alternative lighting can you identify and exploit — for your purposes and the good of the planet? If you devise something, please consider sharing it with your fellow readers.