Posted in: Developing Perspectives (May 2009) 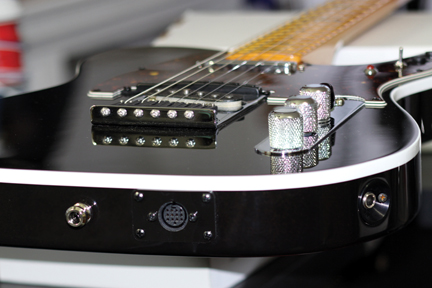 My latest integration project is building MIDI controllers in the form of electric guitars. Although the Musical Instrument Digital Interface (MIDI) standard has been around for years, only recently have affordable MIDI drivers and matching synthesizers for guitars been available. The project in the accompanying photo is that of an electronic Fender Telecaster which I built using a MIDI interface board from Roland Corporation. The black MIDI pickup sensor is visible in the photo, just beyond and parallel to the magnetic pickup.

Unlike a traditional magnetic pickup — which combines the signals generated by the six magnets and wire coils interacting with the six steel strings — each string has a separate pickup for MIDI. As a result, you have much more control over how signals are mixed and sounds are ultimately synthesized. Of course, it takes much more to make music than being able to pluck a virtual note on a harp or harpsichord, but it’s a start for someone with a modest music background.

If you’re thinking of exploring the world of modern MIDI controllers and guitar synthesizers, I wouldn’t suggest taking a router to your favorite guitar, especially if you’re unfamiliar with working with guitar bodies. Instead, start with a relic guitar or start from scratch; amazing second-hand components are available on eBay. I chose the latter route and picked up a used Fender body, neck, tuners, pickup, and other components at a considerable discount. It’s a simple enough project and there are numerous websites on DIY guitar topics, from how to set intonation to the various ways to wire the magnetic pickups. Other than the strings, the only item I purchased new was the Roland GK-Kit-GT3 GR-Synth Driver. This MIDI driver is available online from a variety of vendors, including MUSIC123.com and GuitarCenter.com.

To build my MIDI guitar, I took the blank body and wrapped it in newspaper to protect the finish. Then, with a hand router, I made space for the two pushbuttons and switch for controlling the remote synthesizer, as well as the MIDI board and the special 13-pin connector on the edge of the guitar. Fortunately, the connector supplies power to the guitar — otherwise, I would have had to route out a cavity for the battery. I used a milling machine to remove a strip of the pickguard, making room for the electronic pickup sensor. In all, I removed about nine ounces of wood — enough to change the resonance of the guitar body compared with my other, non-modified Telecaster bodies. One of the challenges in working with electronic musical instruments is that you can get the electronics 100% correct and end up with a lousy sounding instrument. Fortunately, the slightly increased bass sustain that resulted from hollowing out space for components was a welcome change.

If you’re hesitant to take a power tool to your polished guitar body, you can purchase a clamp-on MIDI interface. However, I haven’t had much luck with these, especially on guitars with a metal plate surrounding the rear pickup, such as a traditional Telecaster. There is also the issue of the cable placement and I found the device simply interfered with my playing. The internal interface, in comparison, isn’t noticeable. Simply plug in the 13-pin cable and start playing, similar to the operation of the standard audio jack.

If you’re not into electric or electronic guitars, there are other options for controlling MIDI synthesizers, including MIDI wind instruments, such as the wireless MIDI wind controllers from Yamaha. However, these instruments and associated electronics are much more delicate than a set of strings attached to a slab of swamp ash or mahogany. Regardless of the controller, once you have a means of generating specific MIDI data, you’ve opened up a new world of exploration.
Do you have a MIDI project that you’d like to share with other readers? If so, please consider sending in your story and a few photos of your work. NV