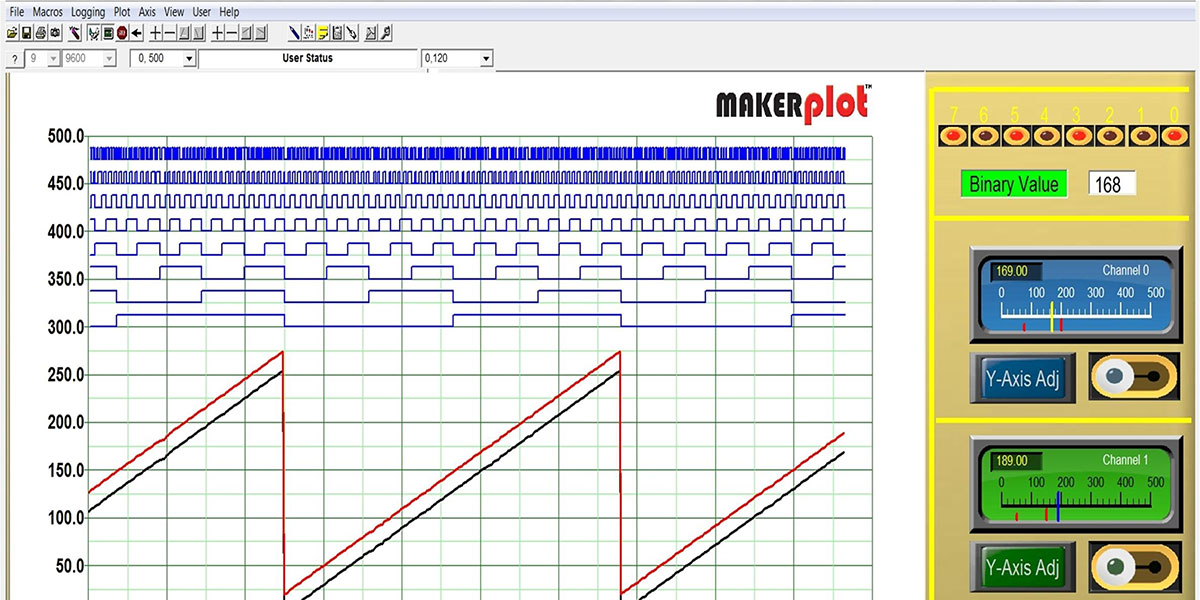 This is the concluding article on our MakerPlot bi-directional monitoring and control series. Part 5 dealt with using an Arduino Uno to control a setpoint level for a potentiometer value, where MakerPlot displayed the actions of two physical pushbutton switches that are attached to the Arduino in order to change the setpoint level up or down. While we showed you how the Arduino can also output MakerPlot commands as well as analog and digital data to do this, it was still really a one-way communications example as in micro-to-MakerPlot and not the other way around.

This time, we’re going to show you how MakerPlot can go in the other direction to send back information to the Arduino in order to control the firmware’s setpoint value using a Slider control on the Interface screen. All of this capability is embedded in the Arduino’s code using MakerPlot instructions, so it’s a very interesting way to look at how to interact with the micro instead of using a physical front panel with knobs and meters and such. (If you haven’t already done so, you can download a free 30 day trial copy of MakerPlot from www.makerplot.com to follow along.) Let’s get going.

The Basics of MakerPlot Bi-Directional Control

Figure 1 illustrates the intended bi-directional interactions between the Arduino and MakerPlot. In simple terms, we’ll show you how to program the Arduino to ask for Slider information from MakerPlot, and then go on to show you how MakerPlot responds to this request via the same serial link it uses to send analog and digital data. 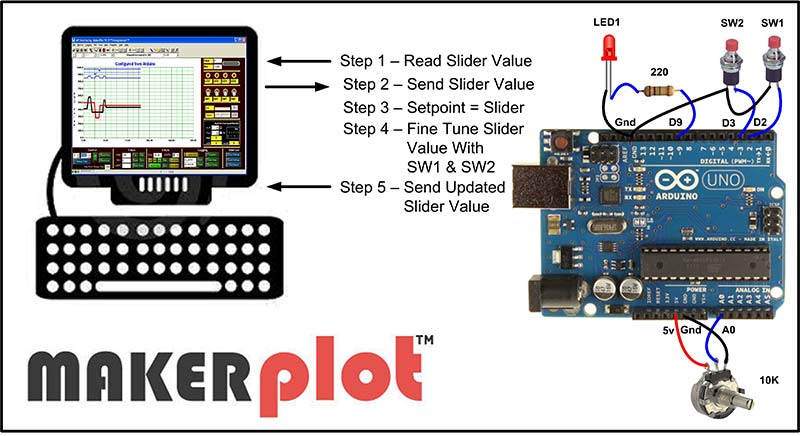 Once the Slider value from the MakerPlot Interface screen is acquired, the Arduino sketch can then “fine-tune” this value using the SW1 and SW2 pushbutton switches.

Finally, the fine-tuned Slider value is sent back to MakerPlot where you can see the value change as you push either of the SW1 or SW2 buttons. What this means is that you can start by adjusting the setpoint value with the MakerPlot Slider control with your mouse, then proceed to fine-tune this value with the SW1 and SW2 pushbutton switches. All of this is accomplished in the Arduino sketch using MakerPlot instructions; let’s see how this is done. 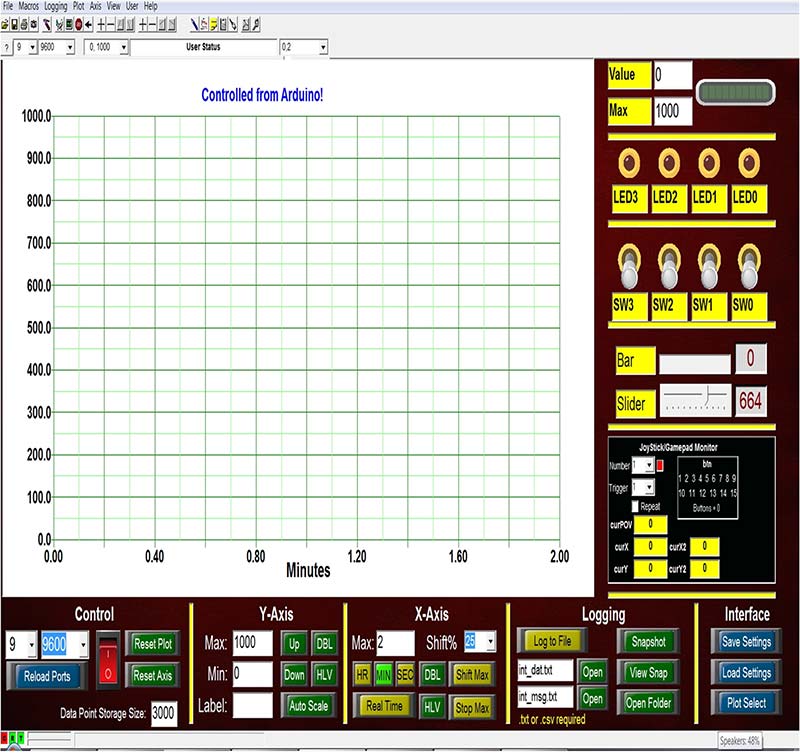 Figures 3 and 4 represent the Arduino sketch that does the work just described. 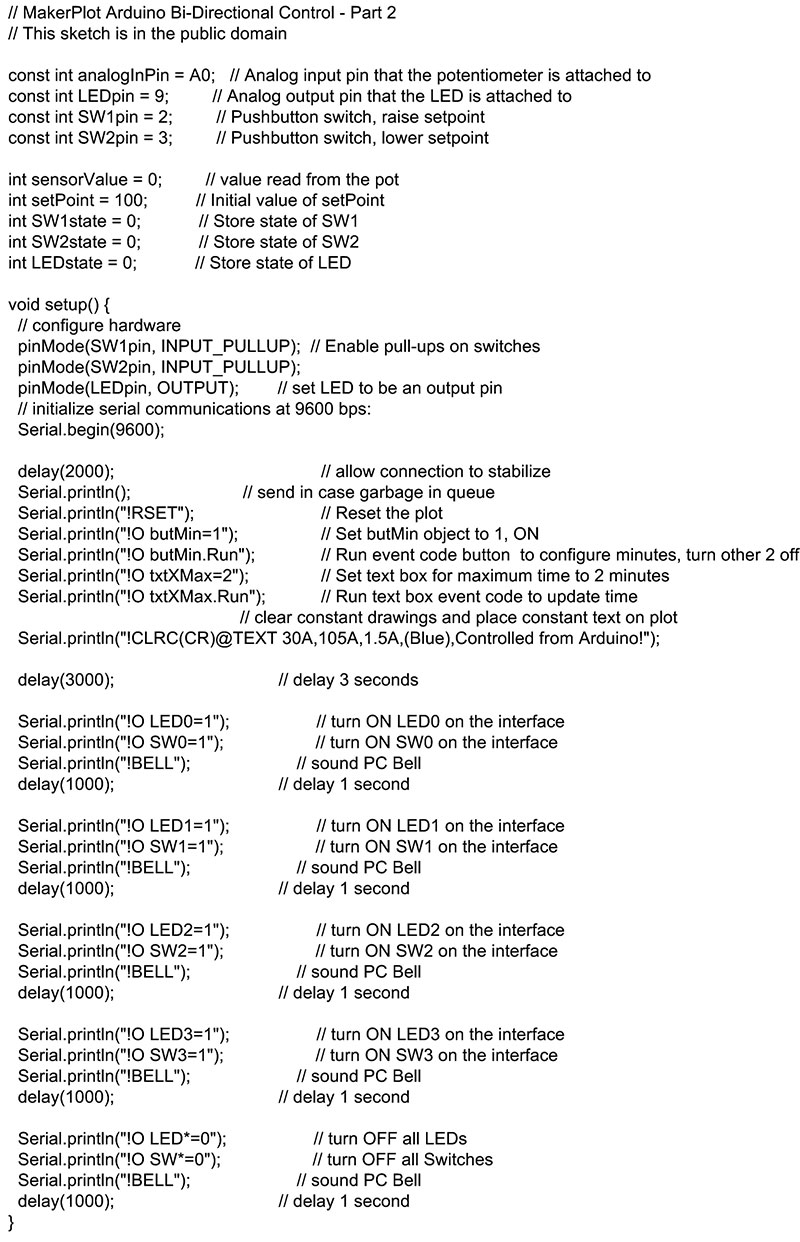 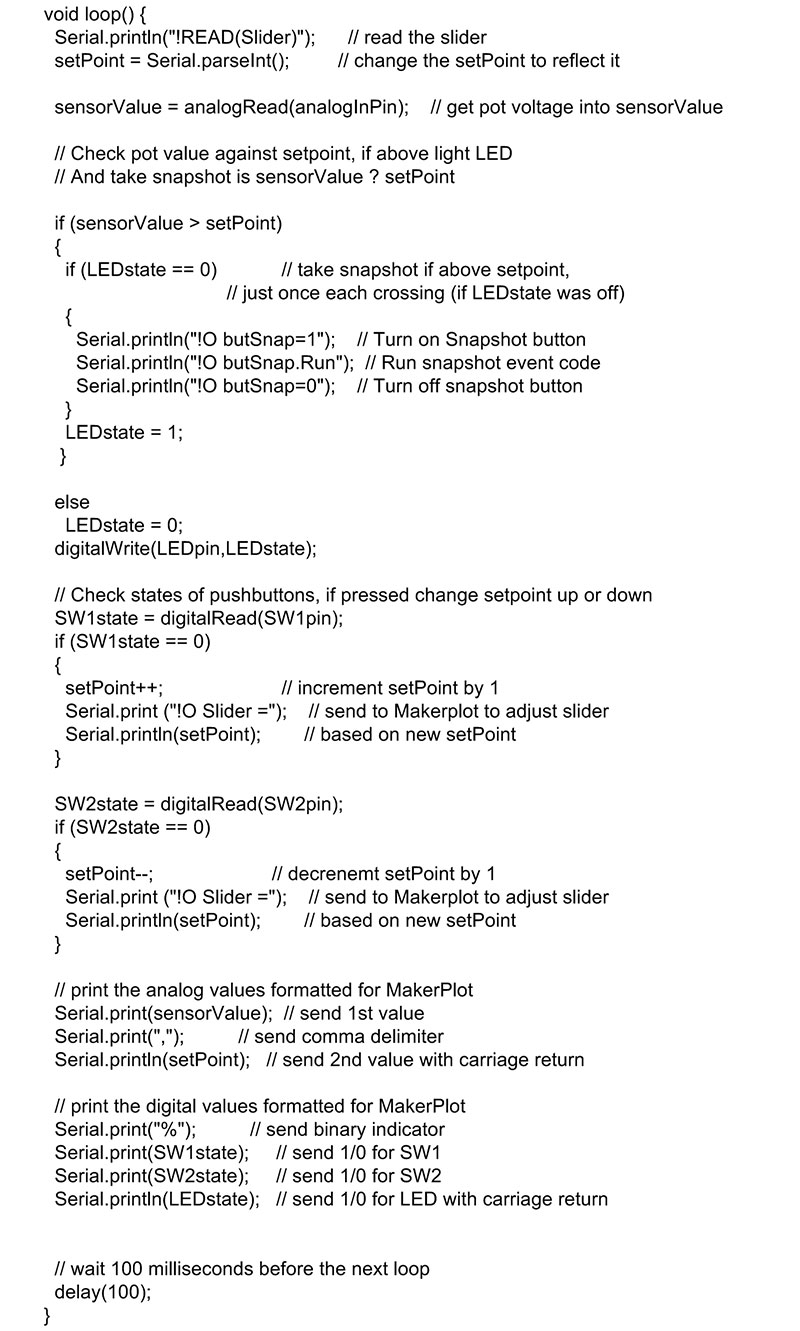 As always, you can download and install this sketch by going to www.makerplot.com, then More → Arduino Sketches →  Arduino Bi-Directional Control – Part 2. Let’s look at the first part now.

Figure 3 is the Setup part of the sketch, and where the constants and variables are defined. It then goes on to use MakerPlot instructions to configure the Interactive Interface to change the horizontal time axis to two minutes and to display the “Controlled from Arduino” message. We did this in Part 5, so it’s the same.

What’s new is the code that turns the four LEDs and toggle switches ON and then turns them OFF again. We’ve included this in the Setup part of the sketch to run only once in order to illustrate how your micro can send MakerPlot instructions via the serial channel to affect controls on the Interface. Here’s what it does.

There are four LEDs and toggle switches on the top of the Interactive Interface (Figure 2). Normally, these controls would react to your mouse clicks by changing state but, instead, this part of the code does it from the Arduino. It’s important to understand how it’s done, since this is how to control MakerPlot from your micro.

Looking at the first group of instructions below, you can see how the !O prefix alerts MakerPlot to the fact that what follows next is an instruction. These three instructions simply turn on LED0 and SW0, and sound the bell audio tone. Then, it delays for a second. There are three more code groups that do the same thing for the other three LEDs and toggle switches:

If you look closely, this is done with the “Wild Card” asterisk (*) symbol that tells all MakerPlot controls that have “LED” or “SW” as their labels to turn OFF (logic 0). So, although you can’t physically see what happens to the LEDs and toggle switches in this article, you can go to www.makerplot.com → More → Videos → Learn and find the Arduino Bi-Directional Control – Part 2. You’ll also have the benefit of seeing first hand what happens to the rest of the setpoint code that is described next.

Now, let’s show you how our new setpoint adjustment using the MakerPlot Slider control and the Arduino’s SW1 and SW2 pushbutton switches work. Figure 4 is the loop part of the sketch that does it; this is how it begins:

The last instruction in this section simply reads the potentiometer value (0 to 1023) into the SensorValue variable, which we’ll eventually compare against the SetPoint. So, with these three lines of code, we now have the Slider value from MakerPlot, as well as the potentiometer value in separate variables. We could have stopped there, but we also wanted to get the two pushbutton switches involved in order to fine-tune the SetPoint value. Here’s how that is done.

Skipping over the part of the code that snaps an image of the Interface if the setpoint value is exceeded, let’s proceed to the part that adjusts the SetPoint variable:

// Check states of pushbuttons, if pressed change setpoint up or down

The code is pretty straightforward:

• Read the switches (SW1 then SW2).
• See if either are depressed.
• If so, increment (SW1) or decrement (SW2) the SetPoint variable.
• Send the new setpoint to MakerPlot via the !O Slider = SetPoint command.

This part of the code satisfies Steps 4 and 5 in Figure 1. What follows is just sending the pot value along with the pushbutton switch settings to MakerPlot for plotting. Then, there’s the 100 millisecond delay and everything repeats.

Figure 5 is just one screenshot of what it looks like. 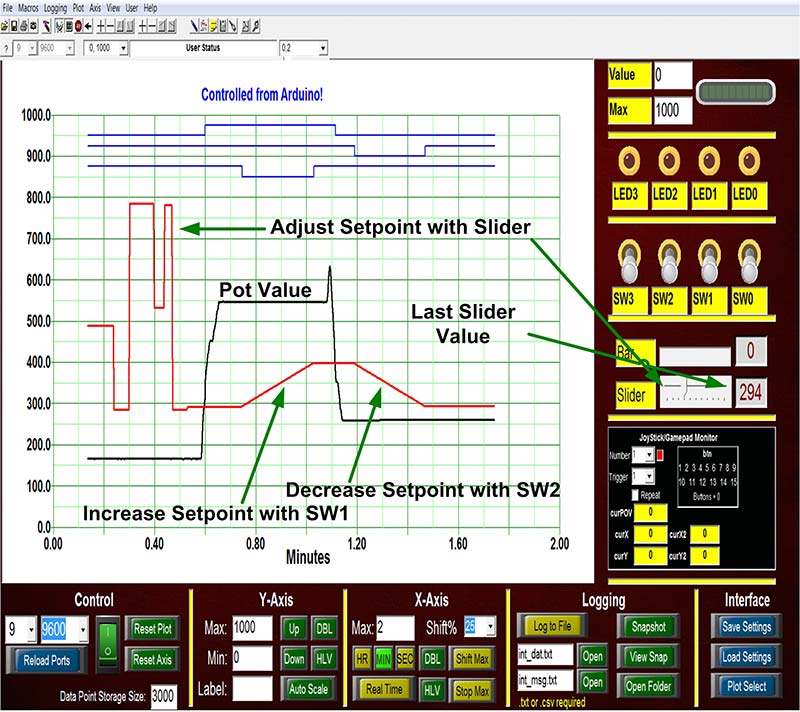 You can bring up the Logs(Debug) Immediate window by clicking on the Logbook icon on the toolbar. It’s shown in Figure 6 where it’s displaying the last part of the setpoint adjustment. 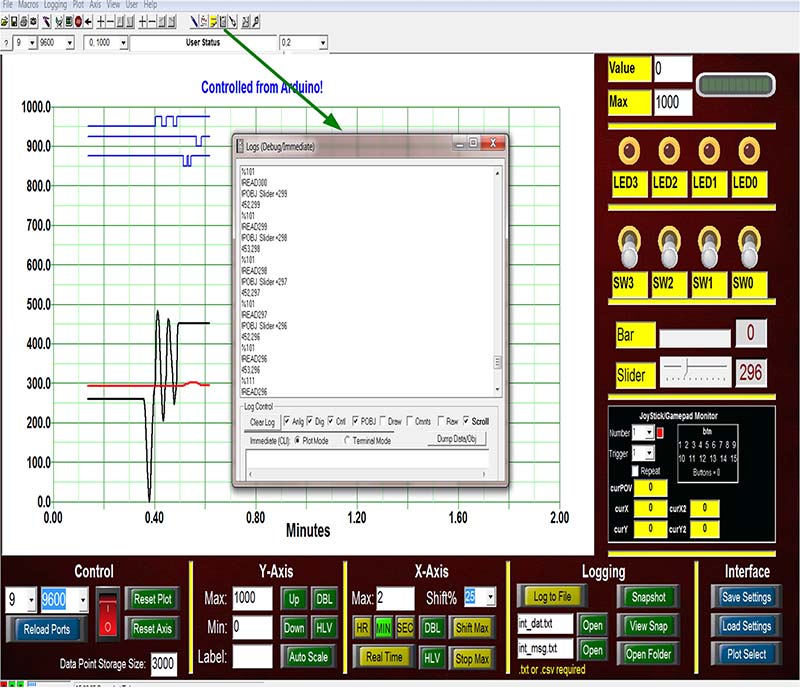 Figure 6. Behind the scenes with the Logs (Debug) Immediate window.

Without going into too much detail, the take-away from this is that with the Logs(Debug) Immediate window, you have a complete record of what MakerPlot “sees” as data, and instructions are recorded both coming and going.

The Logs(Debug) Immediate window is invaluable in not only debugging general data but also in learning how MakerPlot works behind the scenes. As a matter of fact, that’s how this series of articles began by showing you how MakerPlot can be a great debugging tool for your micro’s code.

So, to sum up our bi-directional example to this point, we showed you how you can use MakerPlot as a front panel GUI to monitor and control your micro’s code. In effect, anything you see on the MakerPlot Interface is accessible and controllable from your micro — whether it’s an Arduino or whatever. We could go on with much more about bi-directional control, but that will be left to your imagination.

Remember, MakerPlot is all about customization and interactive control, so we’re sure you’ll think up ways to make it interact with your particular application the way you want it to.

For the next article, we’re going to get more into the Logs(Debug) Immediate window capabilities as it will help you immensely in understanding how MakerPlot works. In the meantime, remember that MakerPlot is available as a free trial download. If you like what you see and what it does, you can order it from the NV Webstore at a discounted price.