As I’ve noted in past editorials, one way around the cost issue is to go with a kit. Kits tend to be cheaper than buying parts piecemeal because of reduced shipping costs, especially if you have to order from multiple suppliers. Kits also reduce the risk of failure. You plug in and solder the parts and — assuming you’ve followed the directions faithfully — the circuit should be good to go. You’ll have to pay attention to capacitor and LED polarity, proper orientation of ICs in their sockets, and the like, but that’s about it.

While kits are fun — I spent most of my money as a youth on HeathKit projects — they often lack the challenge of building a circuit from scratch. However, it’s not an all or nothing proposition. For a great mix of challenge, affordability, and fun, you should try your hand at modding. Modding is simply taking an existing circuit and making it better. Examples of modding include increasing the output power of an amplifier, improving the regulation or efficiency of a power supply, improving the selectivity and sensitivity of a shortwave receiver, increasing the clock speed of a microprocessor, or changing the audio characteristics of a guitar effects pedal. 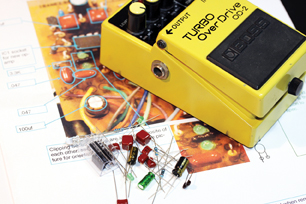 The accompanying figure shows a typical mod sold on eBay for guitar effects pedals. For about $15 (including shipping), you get a small bag of capacitors, resistors, and a chip or two. By replacing the stock components with those from the kit, mod shops claim they can enable your pedal to produce better sound effects.

Every electric guitarist that I know is a modder at heart. They’re constantly changing the pickups in their guitars and experimenting with different chip sets, tubes, and passive components in their amplifiers and other music equipment.

Modding can be a good business. While you can get a bag of parts and instructions for $15, most guitar effects pedal modders on eBay charge $50 to $100 for labor. Modding as a source of supplemental income is something to consider in an economic downturn. The best thing about modding is that you start with just about everything you need. For example, if you’re increasing the low frequency response of a stereo amp, you don’t have to worry about a chassis (have you priced one lately?), display, controls, and the rest. You can focus your efforts on the power supply and power amplifier circuitry.

It takes a bit of discipline to be a good modder. In contrast with kit building, it’s generally a bad idea to make all the changes you have planned and then plug in the equipment. Because you may not be working with a schematic, you could make a mistake that will take you hours to undo if you rush through the project. It’s better to make a small change such as changing the capacitors in the signal path and then checking the results rather than to update the power supply, as well. If your circuit stops working because of a mod error, you want to know which mod is responsible. It’s a good idea to take good notes when you mod. It’s amazing what you can forget when you’re interrupted in the middle of a modding project.

By the way, in case you’re curious, the mod shown in the figure turned out great. In addition to the standard mod component changes, I rewired the push-button switch and made a few other changes that really improved the quality of the distortion produced by the pedal. This highlights another point of modding — start with what’s safe and proven, but don’t end there. Add your own spice. It’ll stretch you as an experimenter and you’ll learn a lot more in the process. NV