The Lost World of Tubes

The tube sound can be simulated on a chip and, of course, there's an app for that. However, the pros insist that there's still a gap between what a processer and an old fashioned tube can produce. I own both tube and solid-state guitar amps and admit that — while the tubes do sound subjectively better — they're a pain to maintain and use properly.

One of the universal truths of tube amps is that the volume level associated with saturation is more than neighbors or roommates will bear. At low volume settings, tube amps make annoying hisses and pops. Solid-state amps, in contrast, sound about the same at any volume level.

A common work-around is to put a tube amp in a closet, close the door, and run a microphone to the amp. I haven't tried this because of the obvious fire hazard posed by clothes hanging over and on a hot piece of electronics (I don't have a spare closet). The second approach is to purchase an attenuator that's placed between the amp output and the speaker. The idea is to dissipate the unwanted audio power as heat.

The problem with the attenuator approach — it will be obvious to readers who have experience building their own ham radio transmitters — is that placing high powered wire wound resistors, capacitors, and other components in the output circuit of a power amplifier has the potential for encouraging RF oscillations.

That is, you can transform a tube audio amp to an RF transmitter by placing inductance and capacitance in the output circuit. The potential for this problem seems to have been lost to the current generation of attenuator developers. 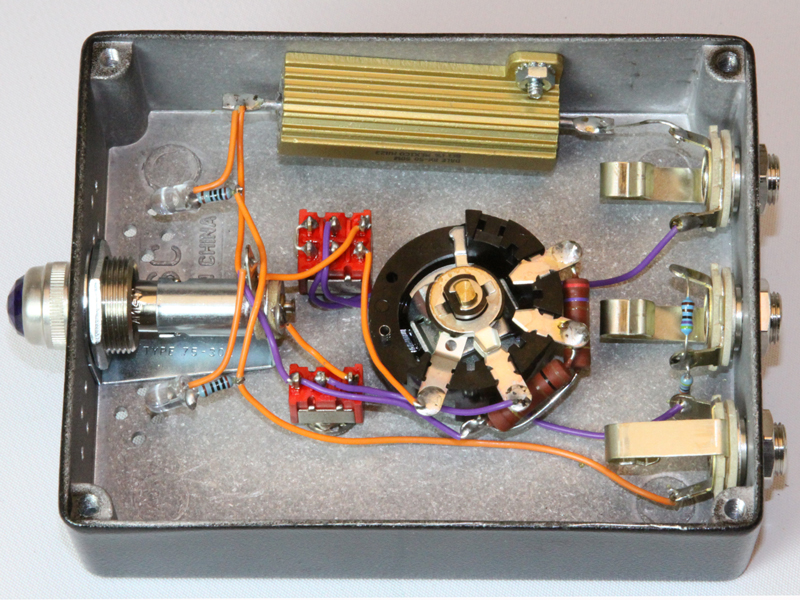 Another approach is to simply place series resistors in the speaker circuit. For example, in the attenuator shown in the accompanying photo, there's an eight ohm resistor in parallel with the output, and either zero, 100, or 200 ohms in series with the speaker.

This does the job of decreasing the speaker output, while matching the output impedance of the amp. Tube amplifiers don't tolerate significant mismatches in output impedance — tube life is shortened.

Another issue with tube-type components is price. Believe it or not, the attenuator in the photo sells for $200, and that's on the low end of what's commonly charged for a few power resistors in a box.

A better option would have been to purchase a 100W eight ohm 'L Pad' from Parts Express or Amazon for about $14. L pads are designed to vary the power delivered to a speaker while maintaining a constant load on the amplifier — typically four, eight, or 16 ohms.

Because knowledge of working with tubes is so limited, there are amazing products on the market that do very well. A popular attenuator that's based on two power resistors and a wire wound rheostat sells for $380 — quite a profit margin. There are similar markups for other peripherals for tube-type amps.

The takeaway is that there's money to be made if you know yourway around a vacuum tube circuit ortake the time to learn.

A painless way to rediscover the lost world of tube circuits is to pick up an inexpensive guitar amp (meaning cosmetically lacking) or a DIY tube amp kit from any number of suppliers such as diyaudio.com.

Of course, the definitive tube amp and audio reference — the Audio Cyclopedia — is a must-read for the tube audio enthusiast and experimenter. NV