Fast-forward to the present, and it’s imminently possible for every hobbyist to afford a body area network of their own. Miniature sensors are now affordable, easy to work with, and reasonably accurate. Moreover, low power, wearable processing power can be obtained off-the-shelf. For example, take the Arduino LilyPad, which I bought from SparkFun Electronics ([url=http://www.sparkfun.com]http://www.sparkfun.com[/url]). 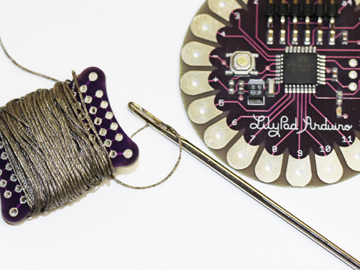 As shown in the accompanying photo, the two-inch diameter disc carries a microprocessor, reset button, LED, and assorted support components. More importantly, all of the significant I/O ports and power are brought to the periphery of the board, where the board can be connected — via conductive thread — to sensors and actuators. Instead of soldering, you tie a knot with the silver-impregnated thread and connect the other end to a sensor or other device. The beauty of using thread and a sewing needle instead of wire and solder is that the disc can be embedded without fear of the connections breaking due to stress on copper wires. I was first drawn to the LilyPad because it could withstand the elements. The LilyPad can be washed, as can the conductive thread. I haven’t washed either, but I have no doubt both would withstand at least a quick rinse in the shower. There is some talk on the Web suggesting some of the silver in the thread can be washed out, so don’t get overly vigorous.

If you’ve worked with any incarnation of the Arduino, then you know the LilyPad. However, the conductive thread is another matter. It lends itself to all sorts of projects, while presenting new circuit design challenges. For example, once you start working with the non-insulated conductive thread, you’ll appreciate the PVC jacket on ordinary wire. With conductive thread, even a simple circuit becomes a traveling salesman problem. There are simple tricks of keeping separate threads electrically isolated, such as placing stitching on opposite sides of the cloth substrate. When all else fails, I resort to pushing a needle and thread through the PVC insulation. There’s a penalty in terms of flexibility over the raw conductive thread, but it’s minor.

I’ve used the thread to create pressure sensors (run two pieces of conductive thread in parallel through carbon-impregnated foam), to provide super-flexible wiring to sensors embedded in a haptic glove, and to create surface sensors in a shirt designed to pick up cardiac electrical activity for an electrocardiogram (EKG) monitor. I’m sure you can think of additional uses for a conductive thread capable of carrying microcontroller I/O and modest power. If, by chance, you’re new to the Arduino line of open source hardware and software, the LilyPad is a relatively painless place to start. You can get complete kits with thread and an assortment of sensors and actuators from SparkFun, and there’s plenty of Arduino info on the Web. The greatest limitation of the LilyPad — compared with the other Arduino formats — is the relative lack of shields or function-specific plug-in extender boards. Fortunately, there is an XBee RF Module shield which enables you to free your projects from the Mac/PC USB tether and still communicate with your desktop or other Arduinos connected to an XBee transceiver. If you’ve created a wearable computing device that does more than blink embedded LEDs, please send in a photo and a short description. It could serve as an inspiration for the rest of us to get out our sewing kits and start stitching. NV