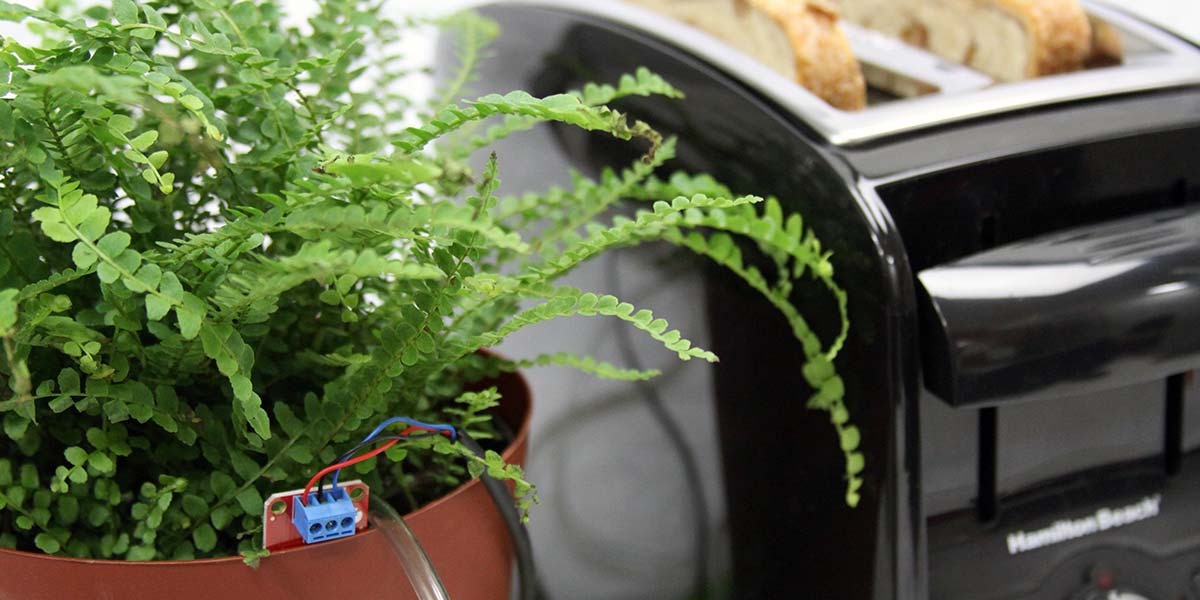 Embedded systems, smart devices, and the Internet of Things (IoT) are changing the way we interact with ordinary objects and electronic devices. This article explores a different way of interacting by using a Translational Reality Interface.

At the forefront of technological development today are smart devices, IoT, simulation, and virtual and augmented reality. Extensions of these technologies — in the form of a translational reality interface — can be used to create interfaces that translate the interaction of one device to the interaction of another remote device. Such an interface would be of benefit, for example, when the user doesn’t want to bother learning how to interact with a new device, there are security concerns surrounding the direct use of the second device, and when the direct interaction with the second device is dangerous, dull, or dirty.

First, let’s look at the basic principles of a translational reality interface using a nearby lamp with an adjustable light output level and a remote audio device with adjustable volume, as highlighted in Figure 1. 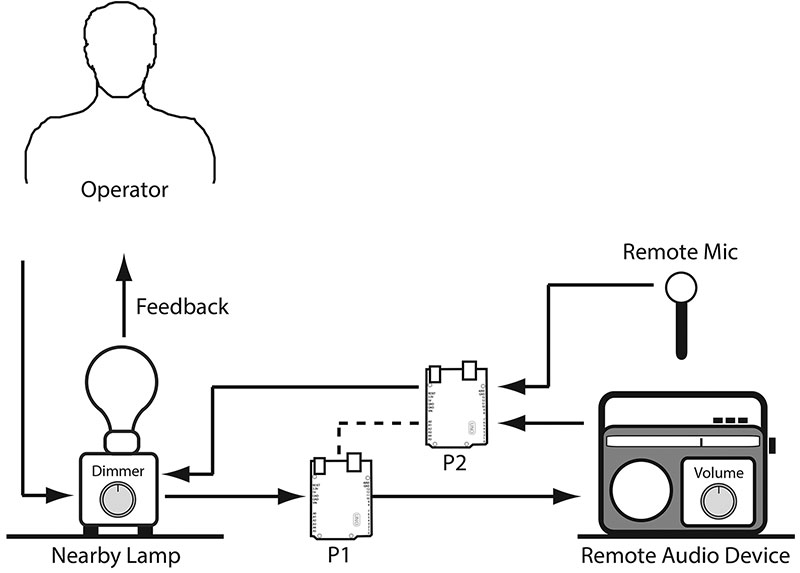 FIGURE 1. A lamp as a translational reality interface to a remote audio device.

In this example, the operator interacts with the lamp by adjusting the dimmer knob and observing the resulting illumination. Let’s say turning the knob clockwise increases illumination and a counter-clockwise turn decreases illumination. Clearly, if the goal were to simply vary the brightness of the bulb, we would simply use a generic dimmer switch and lamp assembly.

Now, completing the loop back to the lamp, either a microphone picks up the audio from the room or the audio is picked up directly from the remote device. The signal is processed and communicated to the dimmer circuitry, thereby determining lamp brightness.

If the devices in Figure 1 are smart devices with web connectivity, then communications can be handled over the Internet. Alternatively, as in the figure, the processor(s) could be connected by cables to the lamp and audio device.

A translational reality interface can be based on a variety of device combinations with one or more control parameters.

Table 2 lists devices that can be indirectly controlled through a translational reality interface.

To illustrate a translational reality interface in action, I chose a toaster because it’s one of the simplest, cheapest, and most used household appliances. You can’t get much simpler than a toaster. You set the preferred darkness of the toast, pop in a couple slices of bread, push down on the cage lever on the toaster, and wait. After a couple minutes, the toast pops up.

This translational reality toaster is a bit different. I’m using it as an interface to an irrigation pump system (see Figure 2). 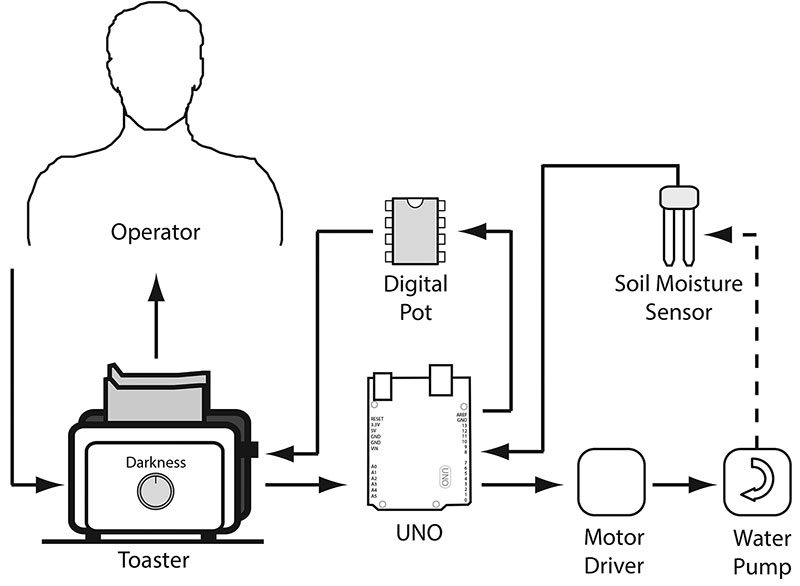 A soil moisture probe senses the resistivity of the soil, and this signal is sent to the signal processor to provide the basis for the actual toaster darkness setting.

At this point, you’re probably asking why anyone would go through all this trouble to water a plant. After all, a microprocessor controlled pump would do the job.

The goal here is to provide you with a simple experiment that will allow you to explore the possibilities with a translational reality interface that can override the automated irrigation system. Once you’re comfortable with this overly simplified example, you can try it on your grandmother’s pill dispenser, home burglar alarm, and other more practical applications.

Key components include an Arduino Uno microprocessor, a 4131 digital potentiometer, a soil moisture sensor, a toaster, and a water pump with controller (see Figure 3). 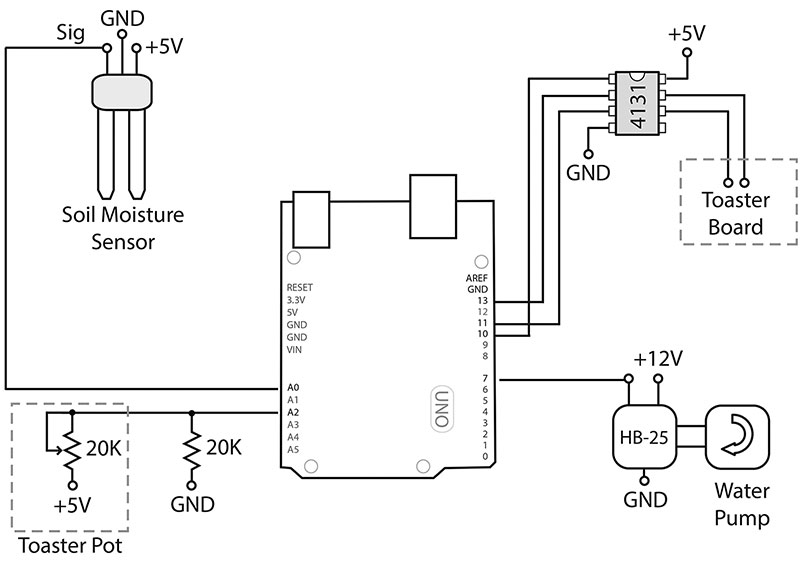 The soil moisture sensor (approx $5-$7, SparkFun) requires 5 VDC, ground, and an analog port on the Arduino to measure soil conductivity. The toaster (a Hamilton Beach Two Slice Cool Touch) is easy to crack open and modify. The irrigation system is built around a 12 VDC HomeCube peristaltic liquid pump (check Amazon) and a few feet of aquarium air pump tubing. The motor controller is a Parallax HB 25, which is admittedly overkill for such a small motor.

On my Cool Touch toaster, the 20K darkness setting potentiometer is mounted in the center of the controller board as shown in Photo 1. 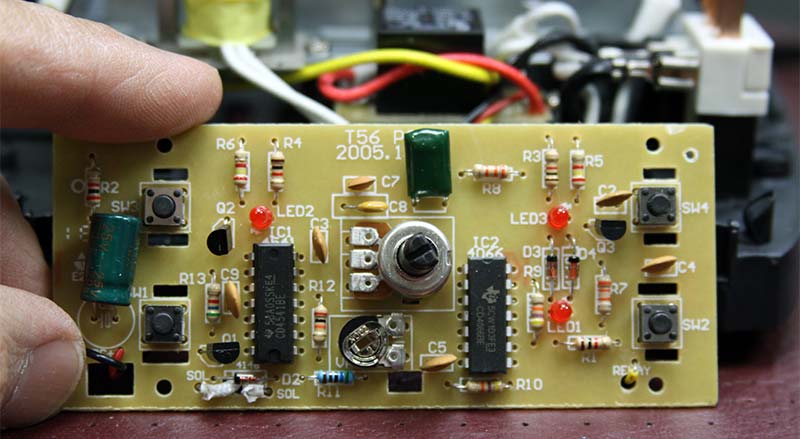 PHOTO 1. Component side of toaster controller board. The 20K darkness setting potentiometer is in the center of the board. 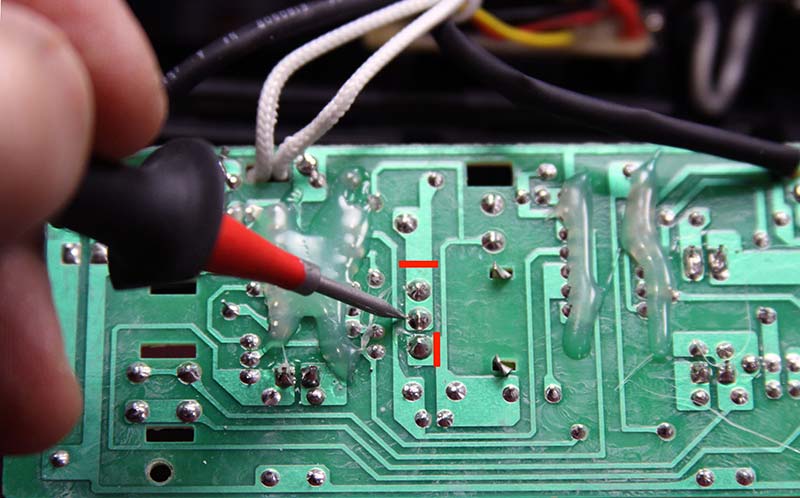 PHOTO 2. Trace side of controller board. Probe is on the wiper arm of the darkness setting potentiometer. Red lines indicate where to cut the trace.

Cut the traces on the potentiometer to isolate it from the rest of the circuit board. If you’re using a Cool Touch toaster, make the cuts as shown in Photo 2. Next, connect two wires of a cable to the circuit trace to replace the onboard potentiometer. These go to the analog output of the digital potentiometer.

Solder two wires of a cable to the pads connected directly to the potentiometer.

The soil moisture sensor and pump system are shown in Photo 3. 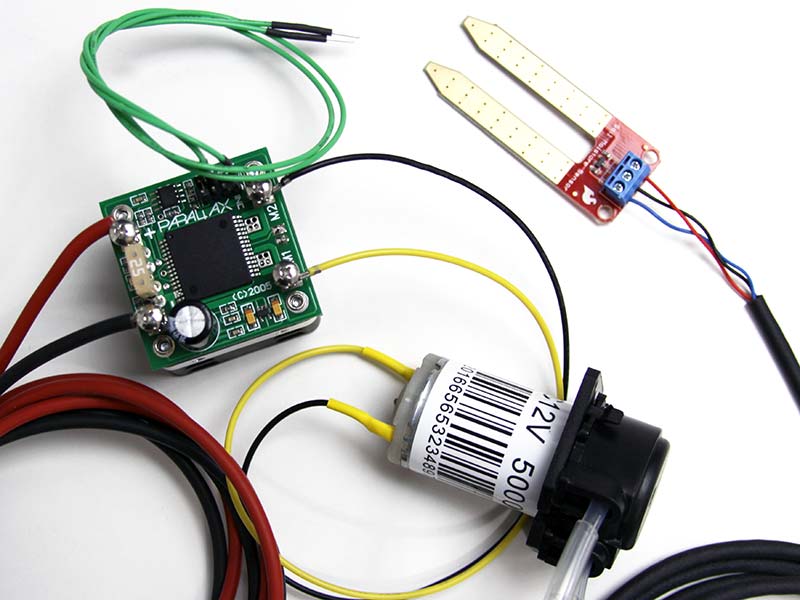 Consider weatherproofing the connections to the soil moisture sensor, and adding a splash proof housing for the motor and other electronics if you plan to mount the electronics outside.

I used a prototyping shield with screw terminals on the Arduino Uno to facilitate testing and hookup as shown in Photo 4. 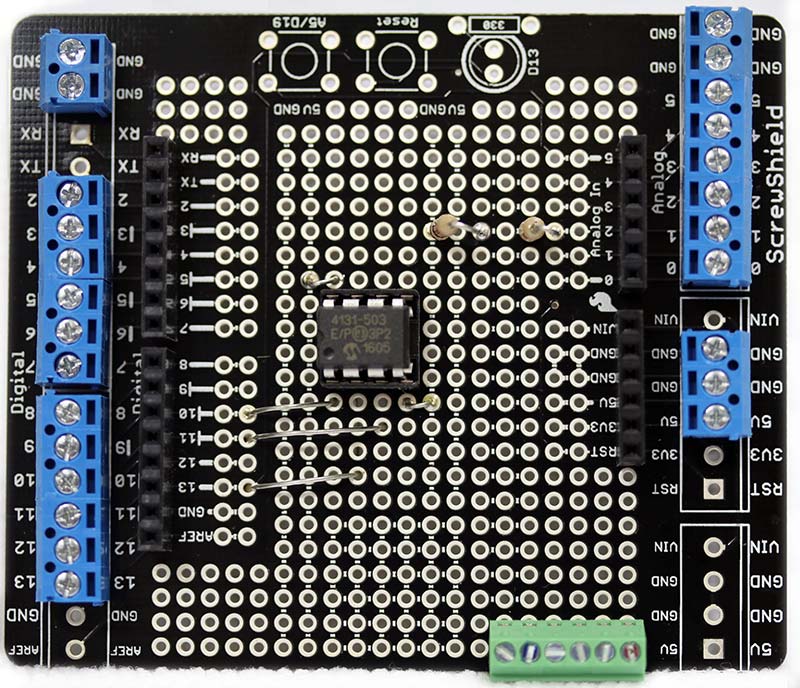 I also used a socket for the digital potentiometer so that I can swap in a 10K or 100K version for other projects. You can see that I used two 10K resistors instead of a single 20K resistor for the soil moisture sensor voltage splitter circuit.

There are two major safety issues associated with working with a toaster. The first is heat.

Make certain the wires are physically bonded to the board before you solder, and verify that the wire insulation can take the high temperatures.

The other issue is working with 110 VAC. Although the board on my toaster is powered by 12 VDC, assume the leads carry 110 VAC until proven otherwise.

A partial listing of the source code for the project is shown in Listings 1-3. As you can see in Listing 1, standard Arduino libraries do most of the heavy lifting.

Comments are omitted here for clarity. The actual source code file in the downloads is commented and contains numerous print line statements for ease of debugging. I’ve included a few additional mapping functions that you can try with the toaster-to-pump control section, shown in Listings 2 and 3.

Listing 3. Alternative mapping to one of five digital potentiometer settings, corresponding to 0-20K.

You may need to tweak the code to reflect the particulars of your components, composition of the soil, area receiving water, and proximity of the pump output to the soil moisture sensor.

Consider the toaster code a basic framework upon which you can build. For example, you could add a momentary switch to indicate your preferred toast darkness. If your budget allows, consider going Wi-Fi or BT wireless. Try a more powerful microcontroller. Add sensor channels, and explore the use of multiple sensors of different types. In addition to linear and log potentiometers, try magnetic reed switches, Hall effect sensors, proximity sensors, motion detectors, and accelerometers.

If you’re a robotics experimenter, then you might look into speed and distance sensors. I’ve had great luck with the PING))) ultrasonic distance sensor. For shorter ranges, the Sharp GP2Y0A21YK0F IR is a good choice — especially for a robotic arm sensor where sensor weight and size are critical. Both sensors are available from Parallax.

Once you get a handle on the translational reality approach, it’s easy to see that you’re primarily limited by your imagination. Who knows, one day some of us will be able to log into our favorite video games and be paid for a full day’s “work” for unknowingly operating a surveillance drone or directing a robot to perform emergency surgery on a soldier in the battlefield. Ponder that over your next breakfast of toast and jam.  NV

Translational reality is a real time closed-loop system in which a user operates a familiar first device and, in so doing, both monitors and controls a second device. User feedback is appropriate to the first device, but reflects the operation of the second device.

Why Not Simply Fully Automate?

With the simple example provided in this tutorial, an obvious question is why not simply fully automate the second system. After all, even complex automobiles are going fully autonomous. The point of a translational reality interface is to provide for human monitoring and control when full automation isn’t practical or possible.

What’s in the zip?
Source code