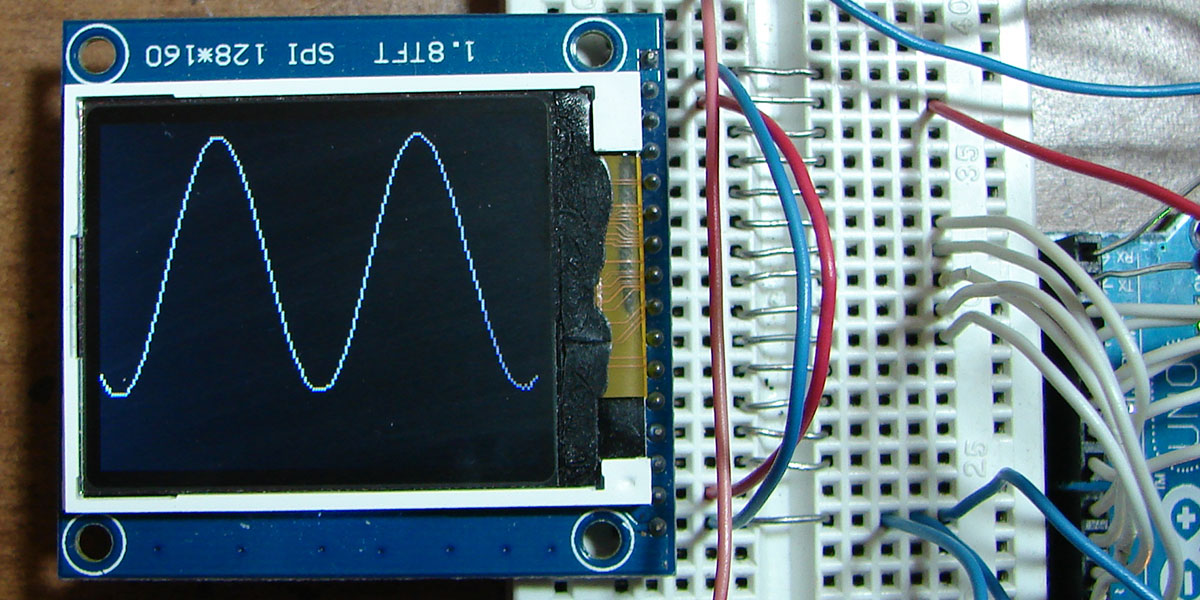 In essence, this is a continuation of my previous article, “Breaking the Arduino Speed Limit” where I introduced the CA3306 fast analog-to-digital converter (ADC) and a 128x64 LCD screen to display the results. That article created so much interest that I decided to write a second article. Here, I will show the solution to the clock “glitches,” add a serial LCD screen that leaves more Arduino pins available for other things, and introduce an eight-bit fast ADC. Then, we will put it all together to make an even nicer digital storage oscilloscope. 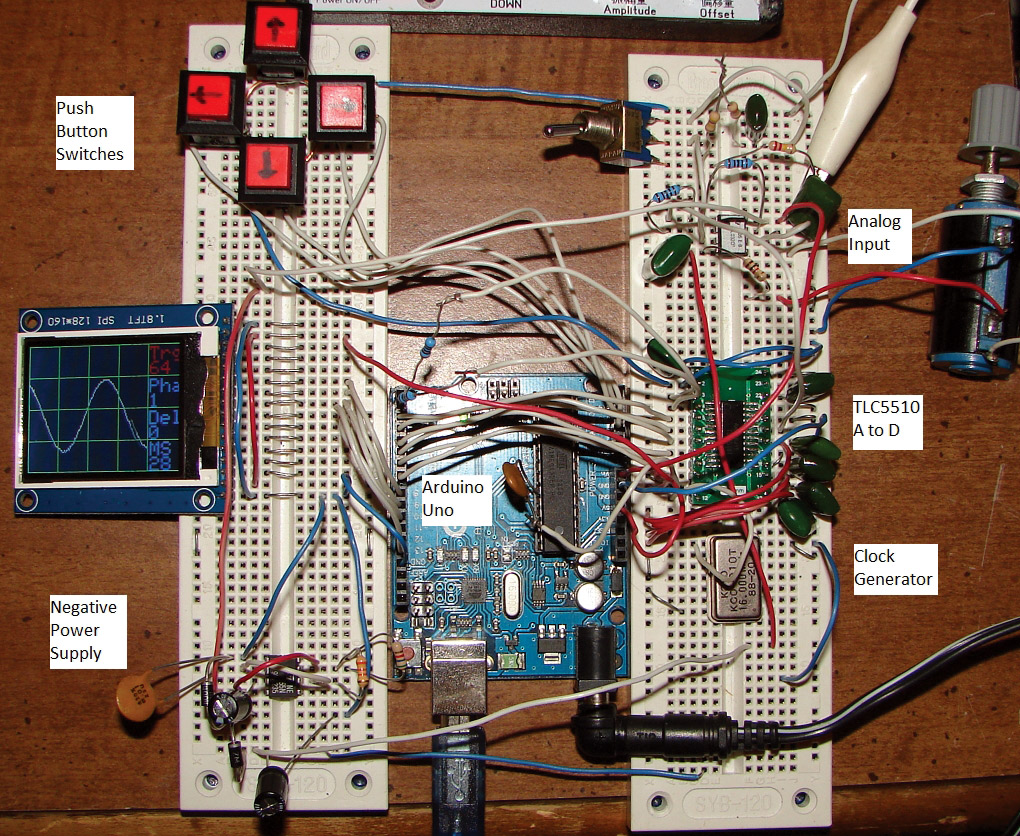 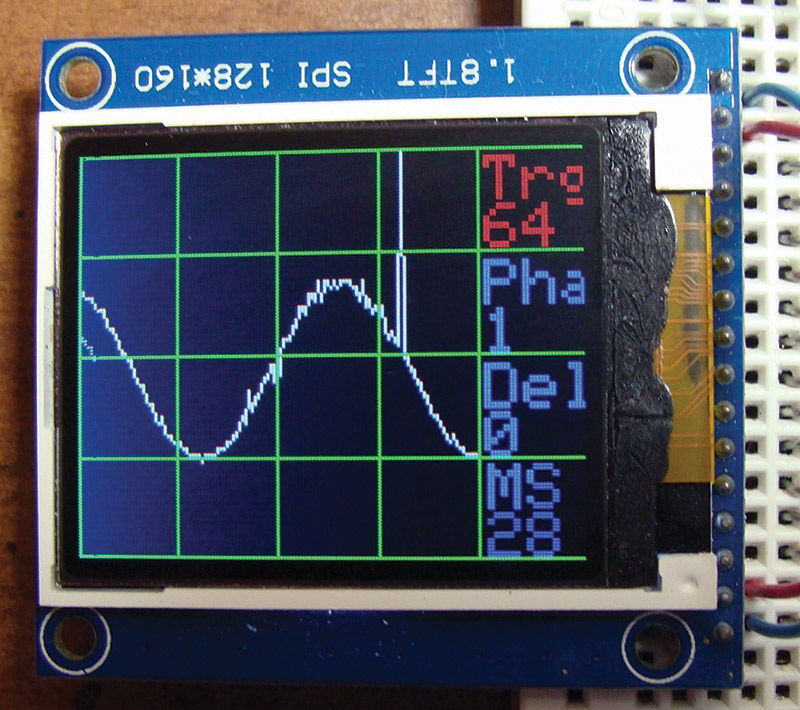 Before we get started with the ADCs, let’s change out the LCD screen for one with color and a serial interface so it will use less Arduino I/O pins. A popular serial LCD is the 1.8TFT SPI 128x160. It only needs five I/O pins with power and ground to operate.

There appear to be two versions of the 1.8 inch TFT LCD screen. One version has 10 pins and the other version has 16 pins. The pin definitions are written on the bottom of the circuit board, so it is just a matter of writing them down before you flip it over and wire it up. In Figure 3, you can see that the pins are clearly marked. 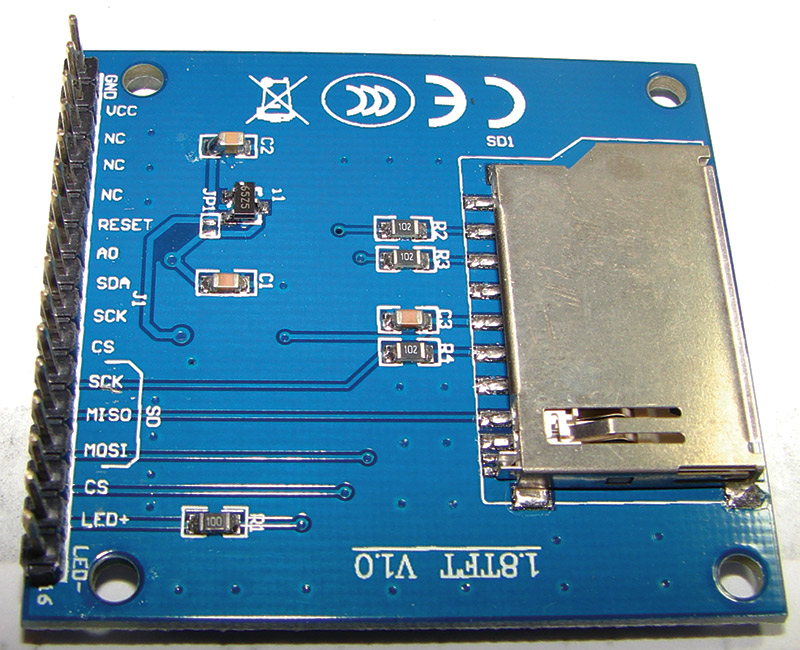 The programs for this LCD will use the new built-in TFT drivers found in version 1.0.5 of the Arduino driver. The programs will not work without this TFT driver being properly installed. Table 1 is a chart showing how to wire the Arduino Uno to the LCD screen. I ran jumpers to connect the two grounds and 5V pins together on the breadboard. 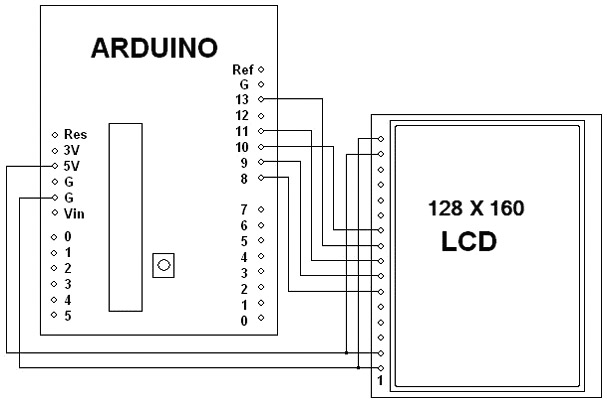 Note that D0-D7 and the six analog pins are now all free to be used for this project. We can start with a simple oscilloscope demonstration program that displays what is on A0 to test out the display. For a very simple analog input circuit, you can use a .1 µF capacitor and a 10K variable resistor to provide bias. Figure 5 shows a simple Arduino oscilloscope. 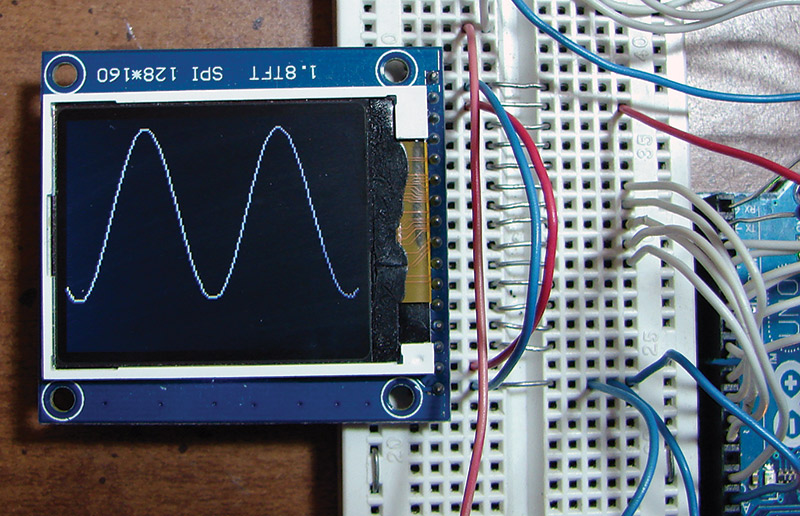 Now, let’s have some fun and add an ADC on D0 to D7. In software, the PINC parallel input command that was used in my previous article is replaced with PIND. We used the CA3306 — a six-bit/fast ADC — in the previous article, so now we will introduce the TLC5510. The TLC5510 is an eight-bit ADC. It comes in a SOP package, so you will have to use an adapter to plug it into a breadboard.

Note that the TLC5510 outputs now go to D0 to D7 of the Arduino. You will need to either disconnect D0 and D1 in order to update the software on the Arduino or use two 1K ohm resistors as shown in the schematic. These same D0 and D1 pins are always used for the Arduino to communicate over the USB connection. However, this is the only way to get eight bits in parallel into an Uno.

Here are some fast ADCs that are all somewhat “interchangeable:”

Figure 6 is the TLC5510 schematic diagram. Note that pin 1 is at the bottom, so the IC is being drawn upside down. 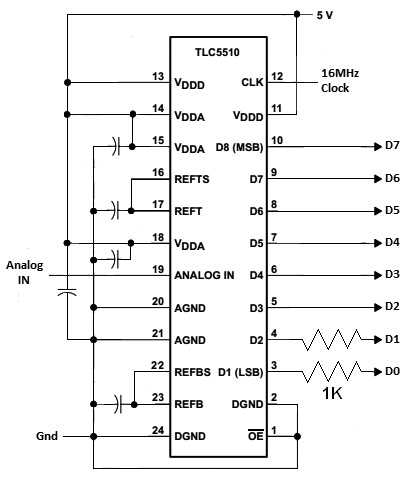 I wired it up upside down to match the schematic and then spun the breadboard around to hook it up. The capacitors are all .1 µF at 16 volts.

Figure 7 shows the TLC5510 wired up and running. In this photo, you can also see the 10 pF capacitor going from the clock to pin 9 of the Arduino Uno. 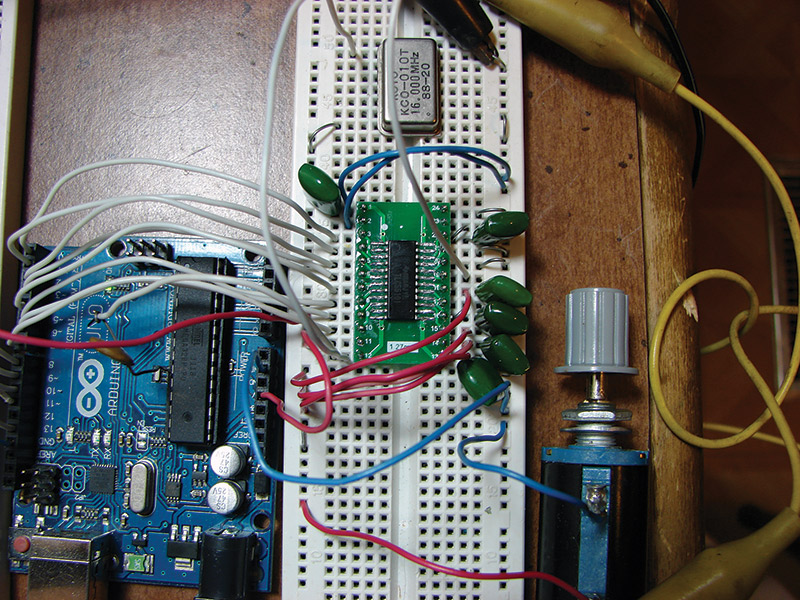 Now to put some of those free analog input pins to work. You can connect four momentary contact switches to A2 to A5 to select up, down, right, and left. Up and down will select the item to change, and right and left will change the values of the selected item. You could put all four switches on one analog pin by having each one select a different voltage. Figure 8 shows the switches schematic. 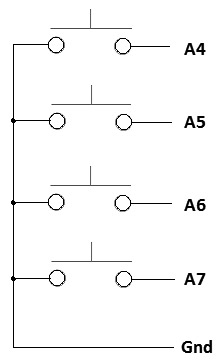 Next, we will improve on the analog input section that we saw in the last article. In the previous design, when you changed the gain of the op-amp, the bias changed and had to be re-adjusted. It is better to not have an adjustable gain to avoid this problem. This change will even make the analog input section simpler to design. You can use a TL082 IC instead of the LF353 for the dual op-amp.

The “bias” control provides a bias to the ADC. You will need a bias of about 1.3 volts as 2.6 volts is the maximum input. The 1.3 volts then becomes the “zero” position in the middle of the LCD screen. This bias is the 0 signal since the ADC uses 2.6 volts as its maximum input voltage and does not allow any negative input voltages. Figure 9 shows the analog input schematic. 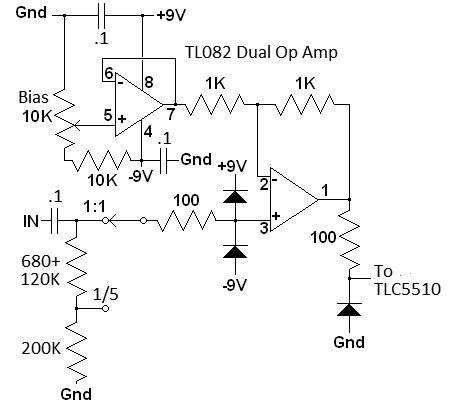 Figure 10 is a photo of what the analog section looks like. Do not forget the .1 µF filter capacitors near pins 4 and 8 of the op-amp. These capacitors will make a huge difference in the amount of noise. I left out the protection diodes for now, but they will need to be there for real world situations. 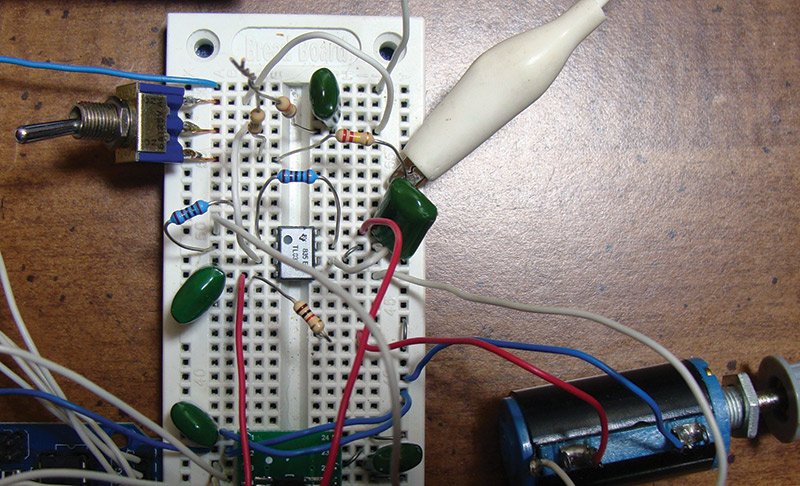 For a -9 volt source, you can use a 9V battery or (even better) use a 555 oscillator with two diodes to form a simple power inverter. Figure 11 is a schematic for a 555 inverter. 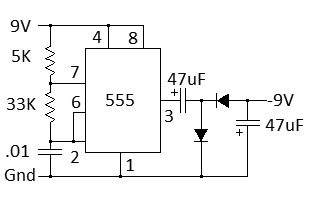 The diodes can be a 1N4001 or similar. Under load, the output is only about -5 volts, but that works fine.

Last of all, there are many software improvements. We can now switch between multiple selections like the delay between samples (as before), the trigger level, and the trigger phase.

Another software improvement is that the trigger is now very “solid.” It first checks for a positive-going signal, then for a negative-going one. Otherwise, it might just catch the positive level anywhere and proceed to collect samples:

The future possibilities are endless. There are three pins still available on the Arduino: D12, A0, and A1. They could be used for logic analyzer inputs, or for additional analog inputs of just about anything that you can imagine. The free pins can even be used to control a FIFO memory IC that can increase the sample rate to 50 MSPS (Million Samples per Second) or even faster.  NV