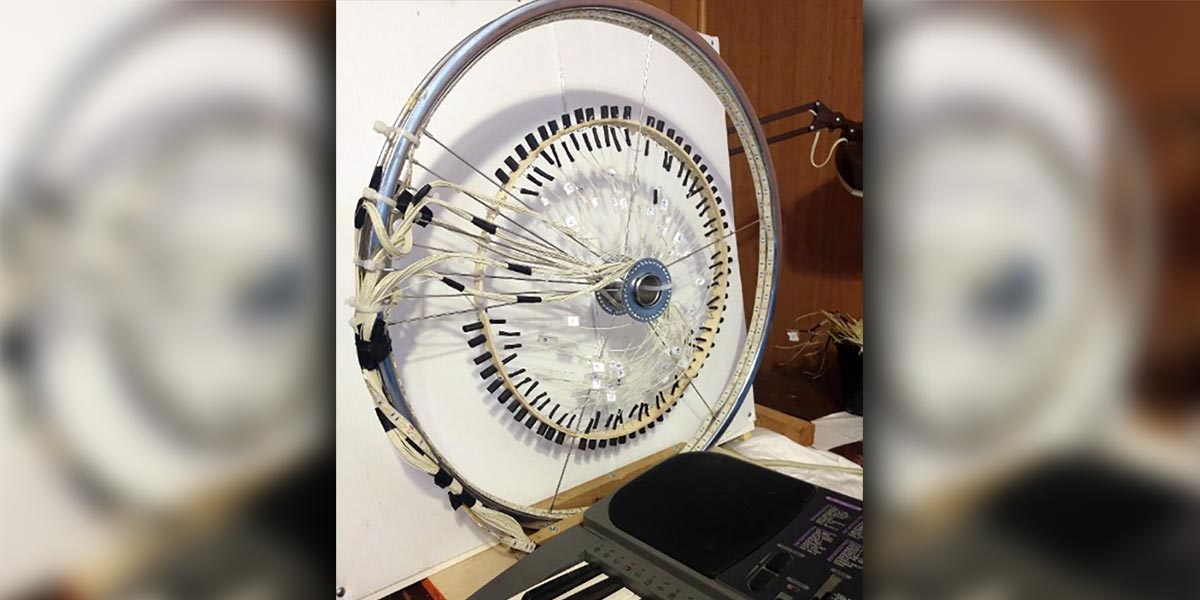 When I started this project, my main goal was to build a laser harp from scratch. I had heard of them and even built a simple 10 note version from a kit. What I wanted to design, however, was a harp covering five octaves utilizing an off-the-shelf concert type of keyboard. This would give the harp range coverage and capabilities of instrument selection, plus it would be MIDI compatible.

As I began my design, I realized the average harp only had about 35 strings. This arrangement covered five octaves, but only had the basic notes available (A, B, C, D, E, F, and G). The incorporation of flats and sharps were accomplished by mechanical means. So, my initial design had the equivalent of 60 notes: A, A#, B, C, C#, D, D#, E, F, F#, G, and G#. In the language of music, an A# (sharp) is the same as a Bb (flat), etc. There is only a half note separation between B and C and again for E and F. So, a B# (sharp) is really a C and a Fb (flat) is really an E. Finally, 12 notes per octave times five octaves equals 60 “strings.”

In a normal laser harp, each string is replaced by a 5 mw laser. I realized very early that a musical instrument utilizing 60 5 mw lasers would be problematical to align, not to mention the obvious safety concerns. Therefore, I decided to use an LED strip as the light source, The name LED harp just didn’t sound exciting, so I decided to call this a lambda harp since lambda is the Greek letter assigned to a wave form’s wavelength.

The basic design premise here is each “string” is replaced by a light source (the LED strip), a CdS photocell, and an accompanying circuit that monitors the state resistance of the photocell. In other words, each string is now the equivalent of a photoelectric burglar alarm.

When the light beam is interrupted, the photocells change in value which is the equivalent of a key on the keyboard being pressed, thus producing a specific note.

On a MIDI keyboard, when a key is pressed, a membrane switch is usually contacted letting a current go through it, resulting in a musical tone being heard through the organ speaker. In more sophisticated keyboards, pressing a key actually results in two membrane switches being contacted, one before the other (see Figure 1).

This second example is the description of the keyboard I used. Basically, I paralleled the connections across these membrane switches to interface my wheel circuitry with the organ membrane switches. For reasons of simplicity and circuit protection, this design used relays — those components from the last century that are not solid-state.

Looking at Figure 2, you can see the basic photocell circuit that I used. 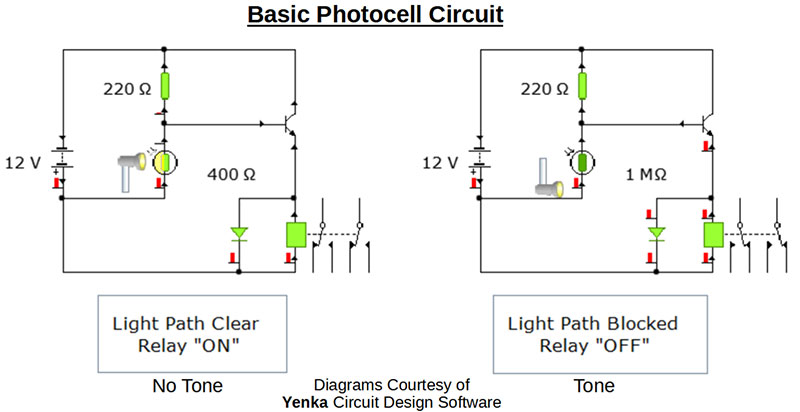 The relay contacts are wired such that an ON relay (unblocked light beam) means the membrane switch is NOT contacted, resulting in no tone being generated; a blocked light beam results in a contacted membrane switch, so a tone is being generated. This is accomplished by my connecting the membrane parallel wires to the NC (normally closed) contacts of the relay, thus simulating a typical alarm circuit.

Operationally, the 220 ohm resistor and the photocell form a voltage divider, the center of which is connected to the base of the 2N3904 driver transistor. While the photocell is sufficiently lit by the LED strip, the base voltage is high enough to bias the transistor to an ON state, allowing current to pass through and thus turning on the relay.

When the photocell illumination is interrupted, the base voltage is pulled low by the 220 ohm resistor, resulting in the transistor turning OFF, thus turning off the relay. The 1N4007 is placed in parallel with the relay coil so that when the relay turns off, the inductive voltage spike created by the relay coil’s collapsing magnetic field doesn’t damage the other components of this circuit.

Instead of the normal shape of a harp, I decided to incorporate a circular structure (see Figure 3, Photo 1). 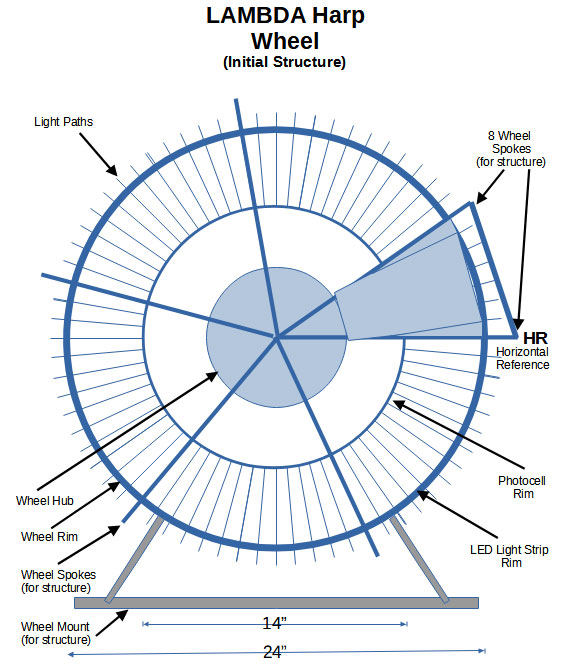 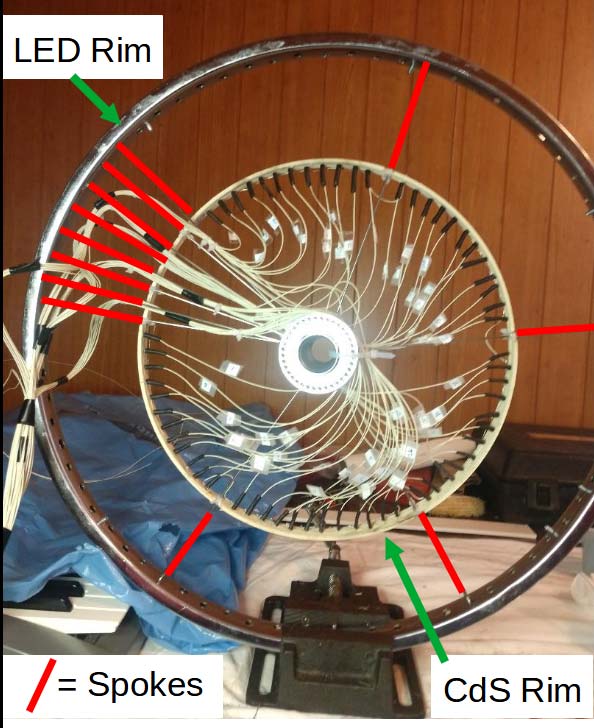 This would make the instrument more compact for playing and moving. For the base component of the circular structure, I selected a bicycle wheel. The initial benefits are the wheel’s strength and uniformity of shape. The most important reason, however, is the wheel I chose has 72 spokes. This means that strategically removing the 60 spokes needed for the light paths left 12 spokes to maintain the shape and structural integrity of the frame.

By starting with eight spokes in sequence then removing 12 spokes, I’ve created the space for the first octave. Next, I kept one spoke for structure and removed 12 spokes to complete the second octave.

Completing the pattern is the next spoke for light paths 25-36, the spoke and light paths 37-48, one more spoke, and finally the light paths 49-60.

This ends at the start of the first eight-spoke set. Paying attention to the keyboard (see Figure 4), the lowest note on the far left (a C) is referenced as note #1.

Moving to the right across the keyboard (counting both white and black keys) they end at the far right (the highest note, a C) which is note #61. I only utilize up through note #60. These numbers correlate exactly with the light path numbers on the wheel.

Along the inside of the wheel rim, the LED strip is positioned facing inward. I should mention at this point that the wheel I used is for a 26 inch bicycle. The actual reality is the wheel’s outer rim diameter is only 24 inches. That resulted is some confusing moments in that I had expected a 26 inch bicycle wheel to be 26 inches in diameter, not just 24 inches. It turns out, a wheel diameter includes the tire.

Next, I inserted a 14 inch diameter thin wood cylinder co-axially inside the wheel. I used a quilting hoop as it seemed the best choice for ease of construction.

On this inner cylinder, I mounted the 60 CdS photocells facing outward, aligned with each incoming light path.

To insure that each photocell would respond to its own radially incident light path, I mounted a piece of 1/4 inch diameter by 1/2 inch length heat shrink tubing around each cell position, facing outward. Photo 2 gives an easier way of seeing these heat shrink light funneling tubes I mounted over the photocells. 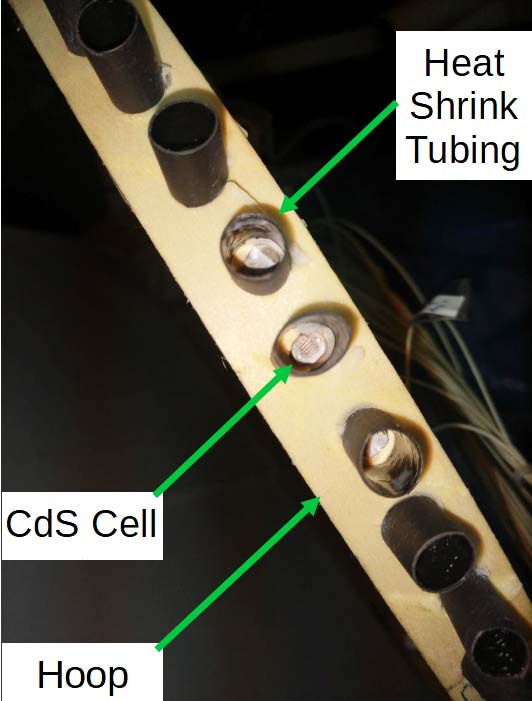 Referring to Figure 5, it shows the wire routing paths I used for both the LED strip and the photocell circular array. 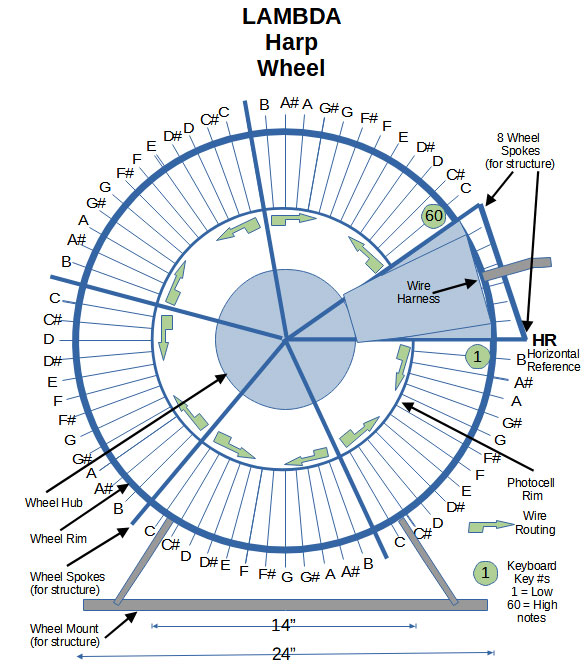 I then mounted the wheel to a wood base for stability. Photo 3 shows you the completed wheel. 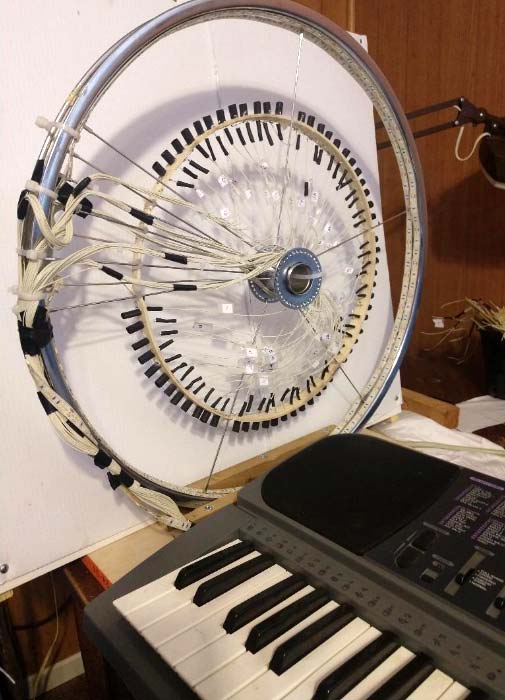 For simplicity and ease of construction, I made the wheelbase out of wood. Depending on the aesthetics you wish, the choice of wood to use will be obvious.

The assemblage and dimensions are shown in Photo 4. 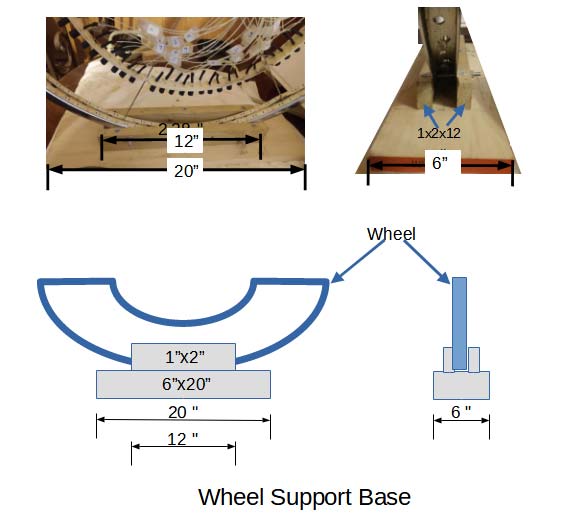 This design gives the wheel the stability it needs for playing.

Connecting the Wheel to the Organ

I designed a printed circuit board (PCB) to mount all of the interface circuitry on.

Figure 6 represents a part of the PCB circuitry. 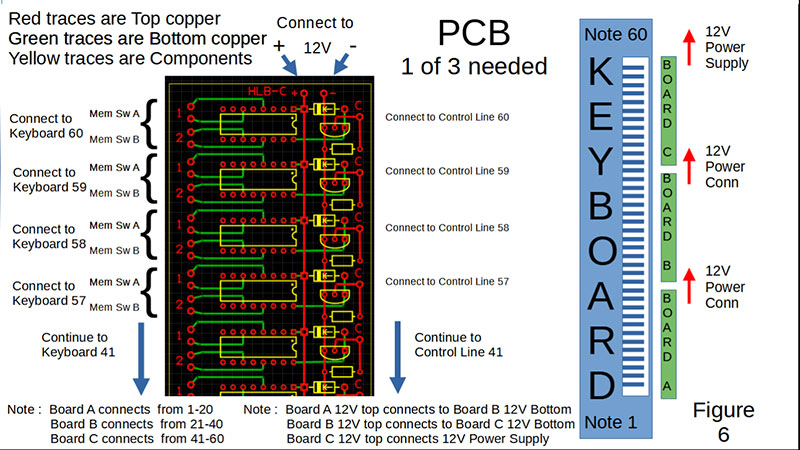 This basic single relay circuit is replicated 20 times per board, meaning three boards are needed to complete the project. Photos 5 and 5A are of the finished harp PCB. 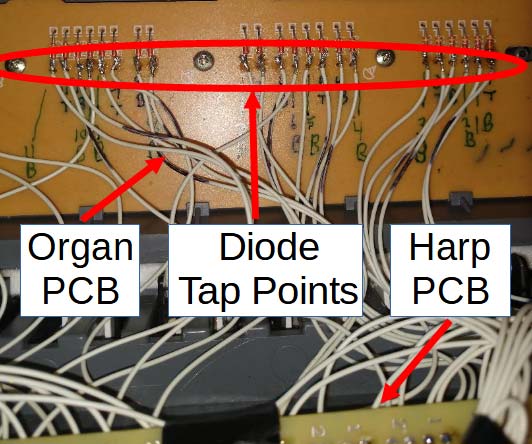 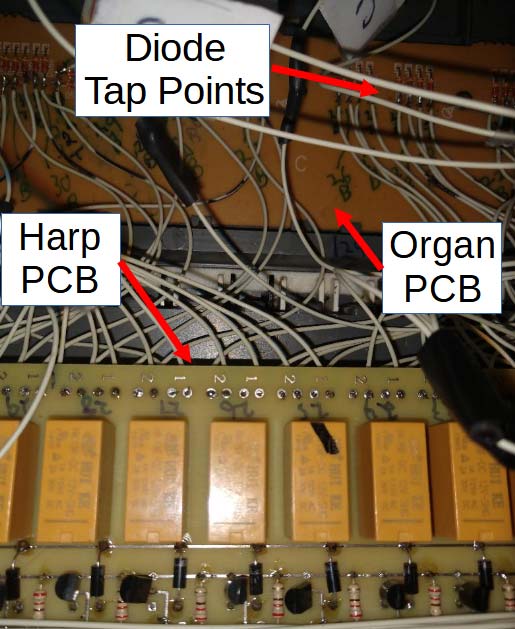 Each relay on the board is a DPDT relay (Figures 7 and 7A), thus handling the two membrane switches needing to be closed simultaneously. 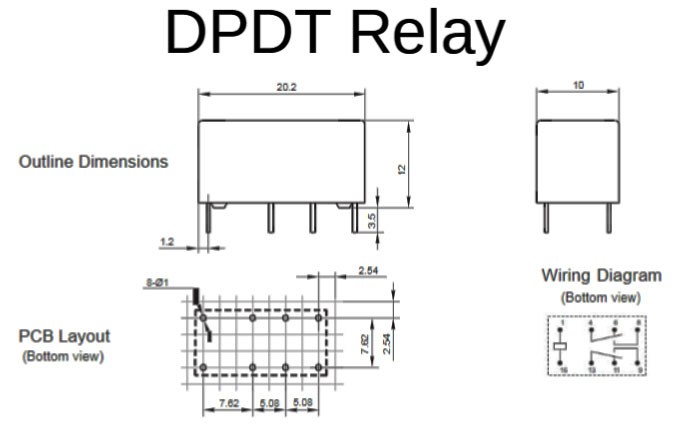 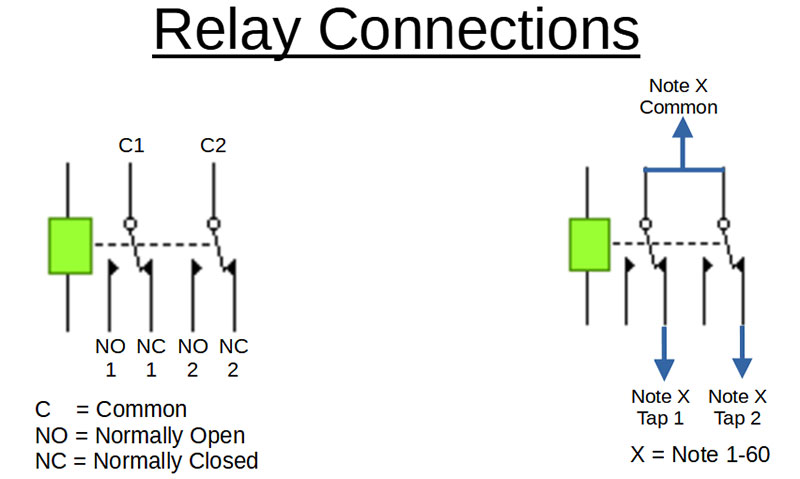 FIGURE 7 (top) and 7A. DPDT relay diagram and pinout.

This action is interpreted by the keyboard as a hard keystroke.

After reverse-engineering the keyboard’s PCBs, I determined the best place to parallel off the membrane switches (Figure 8, Photo 6) was the organ key switch isolation diodes. 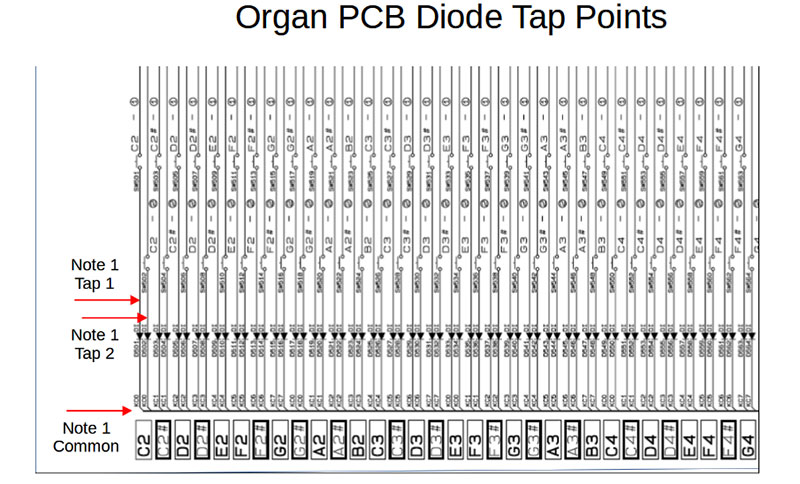 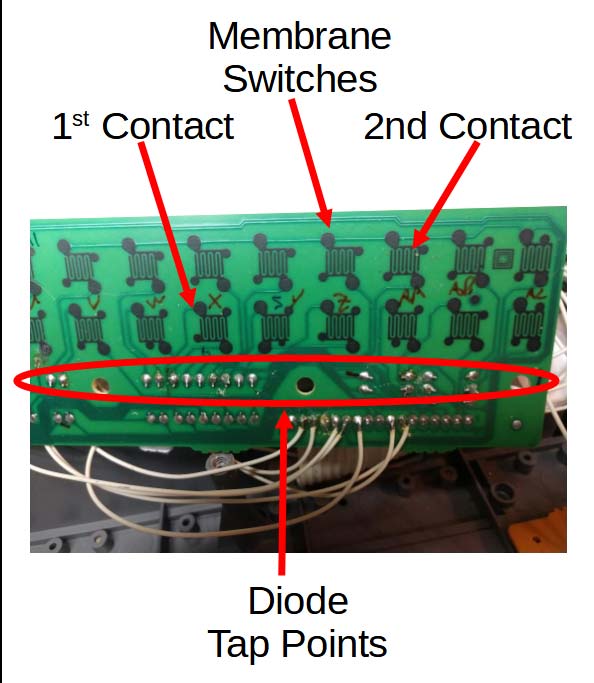 Under the keyboard with the access panel removed, I found exactly the amount of space I needed to nest the three PCBs. Actually, I measured it before I designed the boards.

Anyway, after much soldering, mounting the components on the PCBs, and using 24 gauge Teflon jumper wires, the installation was complete. NOTE: It’s very important that the interface boards be activated BEFORE the keyboard is turned on. No damage should occur, but it might result in a loud sound pulse.

Also, the LED strip I used was long enough to circle the wheel twice, insuring enough light for the photocells. I still had enough length left over to wrap around the front of the keyboard to make it sort of flashy looking.

With the keyboard I used (a Concertmate 990), this device has over 160 instruments, percussive, and synthetic sounds available. And, of course, all of this is MIDI compatible. Have fun!  NV