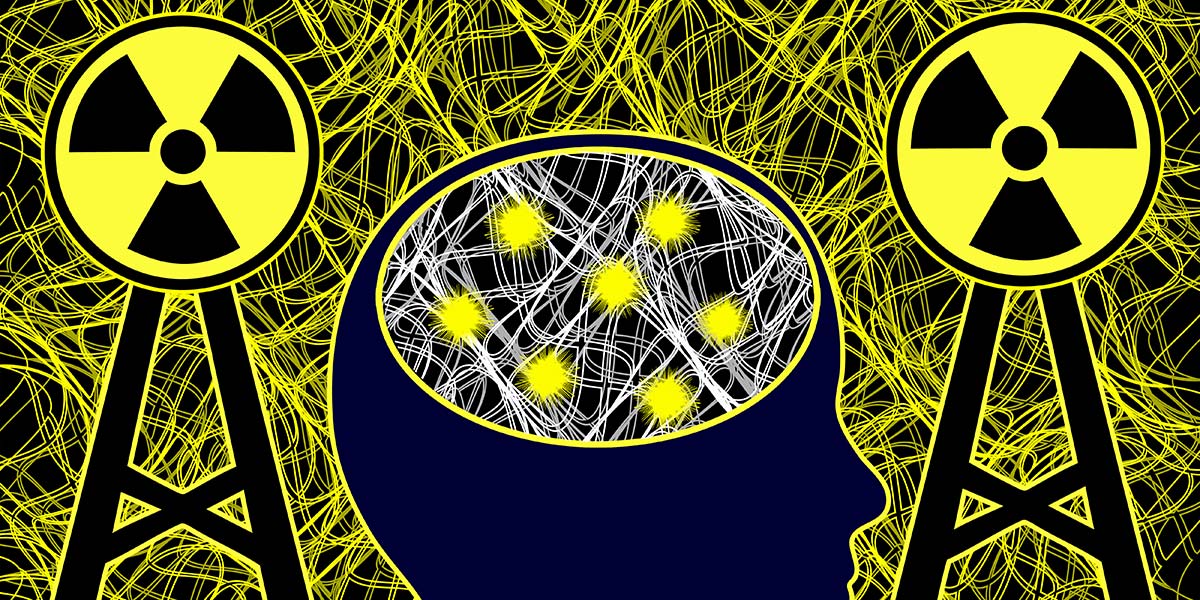 As a teenager, I built a 2 KW two-meter transmitter to work the OSCAR satellite repeater. The transmitter was based on a spherical 4” diameter vacuum tube that looked like a radiation target used in clinical X-ray machines.

One day — by accident — I discovered that I could hold a three foot fluorescent tube in one hand and the tube would illuminate during key-down of the transmitter. Similarly, like most of my friends who were hams or worked in communications, I seemed to always have white RF burns on my fingers. Back then, I never thought much of it.

Clearly immersing my body in an electromagnetic field strong enough to light a fluorescent tube was unsafe and — in retrospect — it was a good thing that the satellite was only available to me a few minutes a day. The RF burns were simply a reflection of my lack of appreciation for the immediate effects of RF on skin. Since then, I’ve come to appreciate the potential hazards of electromagnetic radiation (EMR) exposure.

Part of this appreciation comes from FCC guidelines; specifically, parts 1 and 2 of 47 CFR, 1.1307(b), 1.1310, 22.1091, and 2.1093. These guidelines include labeling antennas with radiated power levels and specifying a minimum safe distance from radiation sources. There is also information available from the American Radio Relay League. The FCC and ARRL aside, common sense suggests a degree of caution is necessary.

In discussing the effects of radiation, it’s important to note that radiation can be ionizing or non-ionizing. Highly energetic ionizing radiation such as Gamma rays from a nuclear detonation causes damage to the DNA in our cells, resulting in cancer and cell death. Less energetic non-ionizing radiation — such as the electromagnetic radiation from a cell phone or high frequency ham transmitter — does not damage the DNA, but does cause localized heating of tissue.

Unfortunately, unlike ionizing radiation exposure, there are no inexpensive EMR exposure badges. And good luck looking to the manufacturer for practical guidance.

For example, the instructions to my 40m loop antenna simply state, “It is the responsibility of the owner/operator of this device to follow all applicable warnings and precautions regarding human exposure to RF fields.” This warning accompanies an antenna designed to be operated within arm’s reach of the operator.

Given the FDA’s guidelines on limiting exposure to cell phone EMR by using hands-free tech such as wired headsets and limiting call time, my take is that I should minimize use of my loop antenna. That’s not a practical suggestion.

Another practical issue is that, even if you don’t work with ham radio or other EMR sources, you’re likely being flooded with EMR from cell towers, power lines, and ordinary electric appliances. In my case, there’s a cell tower within a few hundred feet of my office. There’s not much I can do to avoid the microwave radiation.

Short of living underground in the wilderness without electricity, battery power, or Internet, exposure to EMR can’t be avoided. Even so, look at the guidelines and use a little common sense.

Forget working with local loop antennas. Use remote antennas instead. Try QRP (low power) communications instead of your 2 KW linear amplifier. And keep your phone and handheld transmitter antennas away from your head.  NV