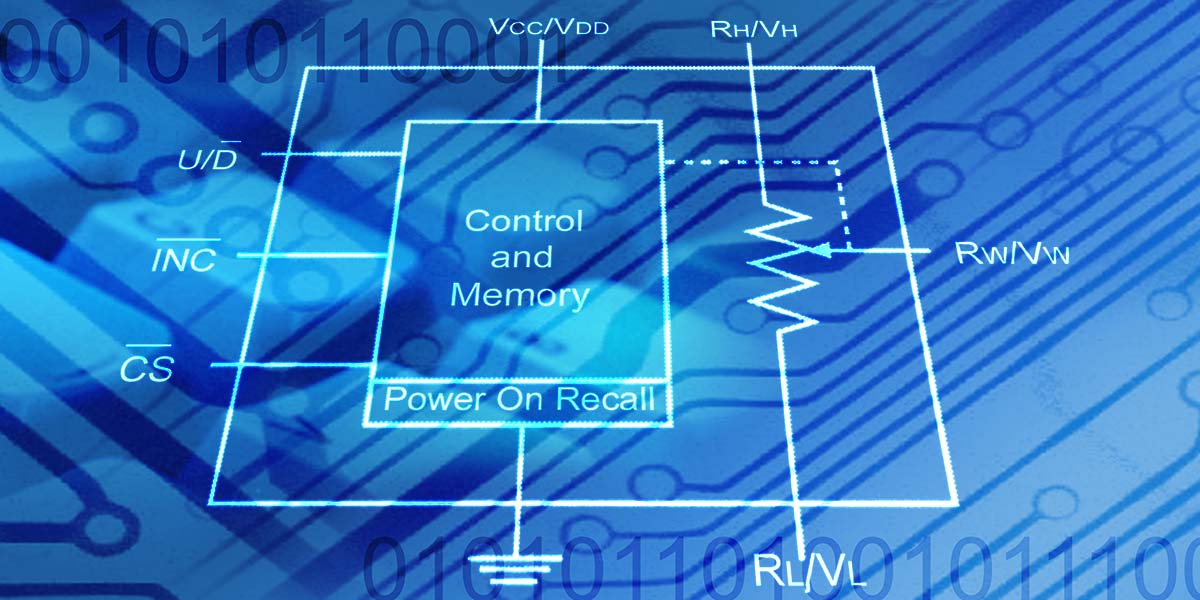 The digitally-programmable potentiometer (DPP) is a mixed signal, system-level control device performing a component-level function. The potentiometer adds variability to the analog circuit, while the digital controls add programmability. The DPP brings the high speed, programming, computation, and control of a processor to the variation of the potentiometer in a wide array of analog applications.

The potentiometer is a three-terminal variable resistance divider device whose schematic symbol is shown in Figure 1. 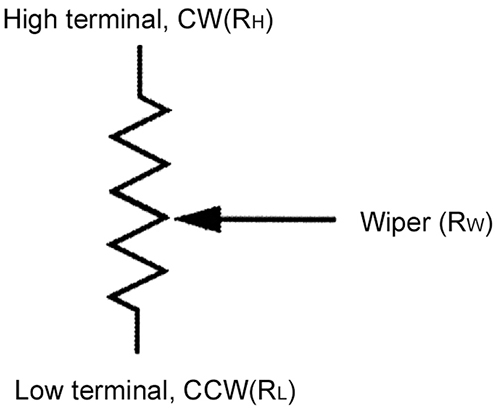 FIGURE 1. Schematic symbol of the potentiometer.

The digitally-programmable potentiometer (DPP) is an electronic potentiometer whose wiper position is computer or digitally controlled. The electronic version of the potentiometer has a memory where wiper settings can be stored. The DPP is a system-level control device performing a component-level function — this idea is illustrated in Figure 2A. The implementation of the analog potentiometer in the mixed-signal integrated circuit is shown in Figure 2B. 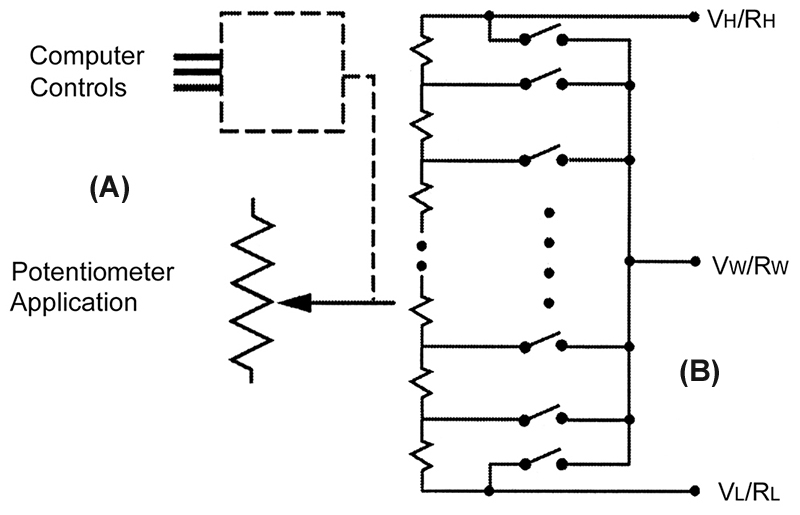 Polycrystalline resistors are connected in series between the RH and RL terminals, and solid-state switches implemented by pMOS, nMOS, or CMOS transistors are connected at each end of this resistor array, as well as between the resistors. The switches are equivalent to a single pole, single throw switch. One end of all the switches are tied together and are connected to the wiper terminal. Only one switch will be closed at a time connecting a node in the series resistor array to the wiper. The resistors are polycrystalline silicon deposited on an oxide layer to insulate them from the other circuitry.

The block diagram of a typical DPP is shown in Figure 3. 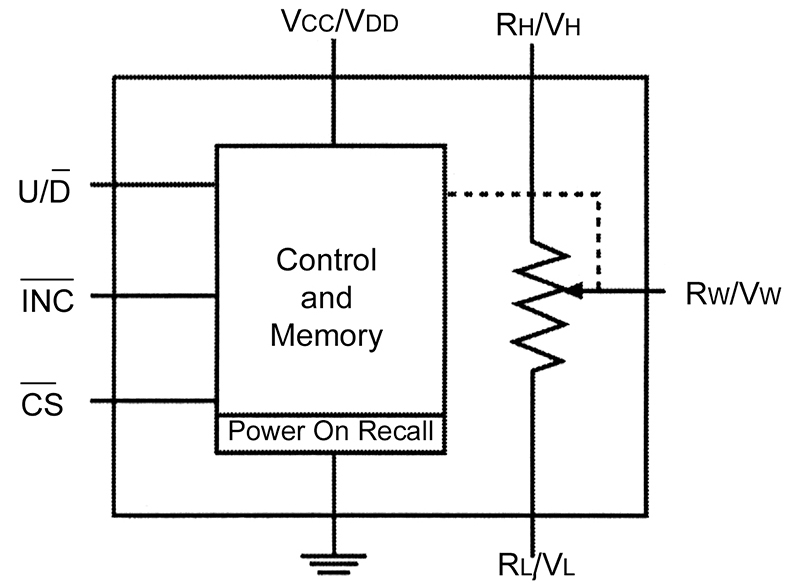 The control and memory section of the device is implemented in CMOS and is typically biased with a 3V or 5V (2.5V-6V) digital or logic supply. The device is controlled through one of several different serial buses. The more common serial buses are:

The control signals for the increment/decrement asynchronous bus are Up//Down, /Increment, and /Chip Select. The Up//Down control input is a level-sensitive signal which establishes the direction of the movement of the wiper. The wiper is moved on the falling edge of the Increment control input in the direction established by the Up/Down signal. The /Chip Select control input is like an address line and enables or disables the device. For the DPPs with an increment/decrement interface, there is only one internal nonvolatile register per potentiometer — the register stores the wiper setting for restoration during the power-up condition. The I2C, SPI, and microwire-like interfaces are synchronous and have protocols.

The second fundamental way of using the DPP is as a two-terminal, variable resistance. A simple application illustrating this configuration is shown in Figure 5A where the potentiometer functions as a variable resistor and, in essence, varies the current through the diode since the voltage across the potentiometer is relatively constant. The variation of R in Figure 5B allows the cut-off frequency of the high pass filter to be programmed. The two basic applications (Figures 4A and 5A) illustrate the use of the digitally programmable potentiometer in a digital-to-analog voltage circuit and in a digital-to-analog current circuit.

The DPP performs a basic component-level function and can be found in a very broad range of applications at both the circuit and system levels. Figure 6 lists some of these applications. DPPs control voltage, current, resistance, frequency, power, capacitance, bandwidth, Q, duty cycle, gain, etc.

For the designer, the electronic potentiometer is a superior component because it is digitally-controlled, programmable, flexible, and has a small size and low weight. In the manufacturing area, the electronic potentiometer is low-cost, reliable, compatible with automated assembly techniques, has a short test time, and has low field service costs.

The wiper-to-low and wiper-to-high resistances of the potentiometer, shown in Figure 7, are modeled as (kRPOT) and (1-k) RPOT, where k is a dimensionless number from 0 to 1 and reflects the proportionate position of the wiper from one end (k=0) of the potentiometer to the other end (k=1).

The number of taps in a potentiometer reflects the resolution of the device or its ability to discern 1 of n. Potentiometers used in a summing amplifier circuit can extend the basic resolution of the pot to almost an unlimited number. The end-to-end resistance (RH to RL) of the potentiometer is RPOT and comes in 1kΩ to 100kΩ values. A low cost, low TC, one percent resistor in parallel with RPOT provides the designer with a technique of customizing the pot's end-to-end resistance in most applications. The voltage VCC/VDD, 2.5V to 6V, provides the voltage biasing for the digital control and memory section. The voltages VTERMINAL or VRH/VRL are the maximum voltages that can be applied to the potentiometer pins in their application. Wiper resistance models the resistance rds (on) of the MOS switches used to connect the wiper terminal to a node in the resistor array. The wiper current spec, 1-3mA, limits the maximum amount of current allowed through the wiper switches.

Application circuit topologies where the wiper is connected to a high impedance minimize the dependence on the wiper's specs. Absolute linearity describes the actual versus expected value of the potentiometer when used as a divider, and is guaranteed to be accurate within one least significant bit (LSB). Relative linearity describes the tap-to-tap accuracy and is guaranteed to be 0.5 of an LSB. Two parameters describe the temperature dependence of RPOT and the resistances in the series array. RPOT TC (temperature coefficient) is a nominal 300ppm/ºC and the ratiometric TC is guaranteed to be within 20ppm/ºC. While the data sheet parameters reflect the performance limitations of the digitally-controlled potentiometer, there are a large number of circuit techniques that minimize these limitations. Application notes and technical briefs describe these techniques and are available at On Semiconductor's website www.onsemi.com.  NV