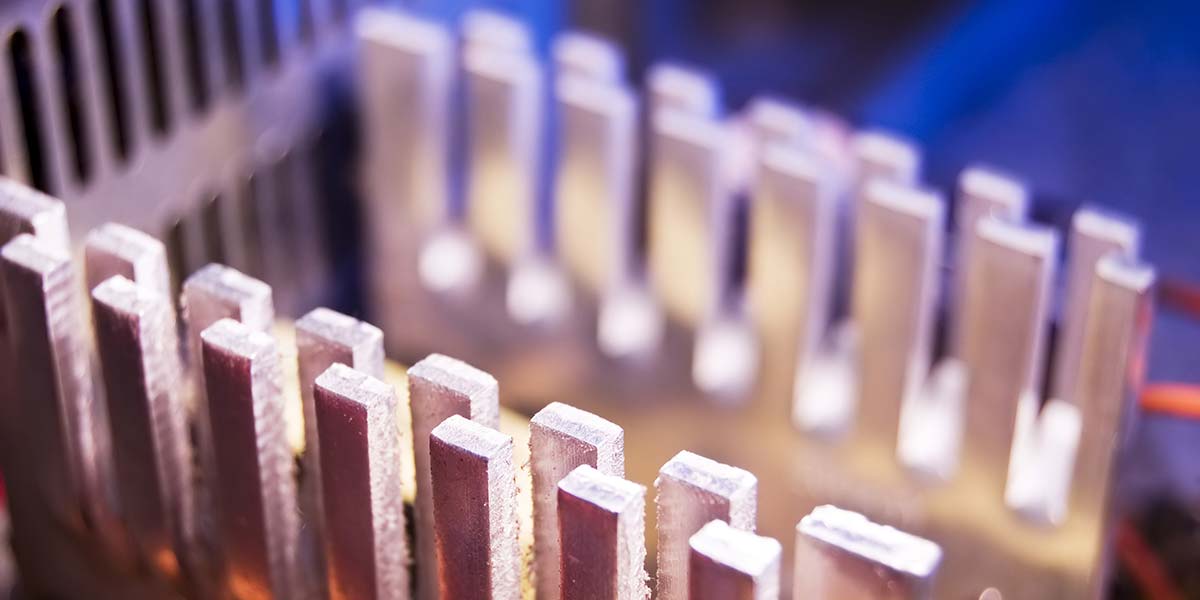 How To Basics: Intro to Heatsink Selection and Installation

“Ouch!” I exclaimed as I examined the almost perfect circle surrounding a stylized “M” (for Motorola) that was branded into the end of my index finger after touching the case of a power transistor to see if it was “warm.” This was my introduction to “heatsink selection for power semiconductors” I received as a young experimenter building a power supply — a lesson I have not forgotten several decades after the event. The purpose of this tutorial is to provide an introduction to basic concepts of heatsink selection and installation for power semiconductors, and possibly save you a few burned fingers and burned out devices, as well.

Just as important, it is necessary to keep Tj as low as possible to ensure the reliability, service life, and performance of the semiconductor device. Typical values for the maximum junction temperature specified by semiconductor manufacturers range between 125°C to 150°C, although some devices — the 2N3035 NPN transistor for example — are rated for operation up to 200°C. A rough rule of thumb is that the operating life of semiconductor devices decreases by half for every 10°C rise in temperature above 100°C — equivalent to an exponential decrease in operating life with increasing temperature. 1

A heatsink is a mass of metal that conducts heat generated by power semiconductor devices to a location with a cooler temperature — usually the ambient air — where it is removed by natural convection. A properly designed heatsink will maintain the junction temperature of the semiconductor devices well below the maximum operating temperature while minimizing the impact on the budget of the project. Figure 1 shows several small heatsinks designed for TO-39 and TO-220 case styles which are suitable for dissipating a few watts of power and are compact enough that they could be mounted on the circuit board itself. Higher power dissipations in the tens of watts are achieved by mounting a large heatsink on the back of the chassis which maximizes heat dissipation due to natural convection (see Figure 2). 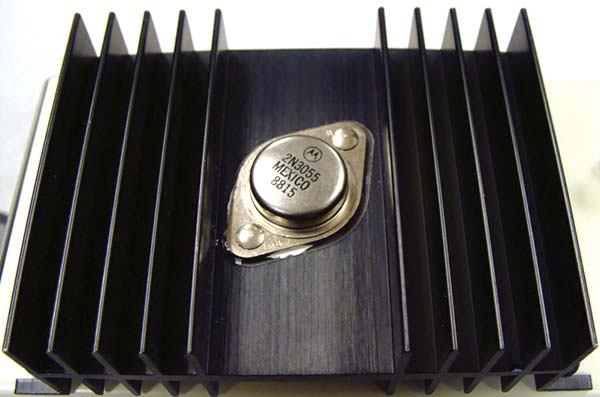 FIGURE 2. A power semiconductor with a TO-3 case style mounted to a heatsink attached to the back of a chassis.

Increased heat dissipation beyond that given by natural convection — available, of course, at increased cost — may be obtained by either forced convection provided by a mechanical fan or by circulating some type of liquid coolant through the heatsink to remove excess heat. The sidebar discusses the concept of a thermal circuit in order to define some common terms and introduces the mathematical description of the problem of transferring heat from the semiconductor junction to the environment.

To provide an example, we’ll apply this information to the problem of selecting a heatsink appropriate to provide adequate heat dissipation for a LM309 five-volt regulator used in a typical power supply application.

FIGURE 3. The application of Ohm's Law to electrical (left side) and thermal (right side) systems.

Figure 3 illustrates this idea and shows that just as the electric current I in a resistor results from the potential difference ΔV across a resistance R in an electrical circuit, thermal power flow PD produces a temperature difference ΔT across the thermal resistance in a thermal circuit. Solving the thermal equation given in the figure gives T1 = PD • θ + T2. For the problem of heatsink design, T1 is the desired operating junction temperature Tj; T2 is the temperature of the ambient air TA; PD is the power dissipated by the semiconductor device, and θ  is the total thermal resistance between the semiconductor junction and the environment; by substitution this results in the thermal equation Tj = PD • θ + TA.

FIGURE 4. TO-220 case attached to a heatsink (left side) and equivalent thermal circuit (right side).1

Is it possible to verify that the heatsink installation is working? The right side of Figure 4 suggests a method for applying the thermal equation in order to verify that the heatsink is adequately sized. If the power dissipation PD and case temperature TC are known (perhaps by clamping a temperature probe to the case after applying a bit of thermal grease), the thermal equation becomes TJ = PD • θJC + TC. This relationship shows that the temperature at the semiconductor junction may be found by adding the case temperature TC to the product of the power dissipation PD and the junction-to-case thermal resistance θJC.

A typical heatsink installation is shown on the left side of Figure 4 which shows the cross-section of a power semiconductor; in this case, one with a TO-220 package. When the device is in operation, the temperature of the semiconductor junction rises causing heat to flow from the semiconductor die through the metal case and mica insulator out to the metal heatsink where it is dissipated into the atmosphere. The metal heatsink is usually bolted onto the metal chassis so it is necessary to electrically — but not thermally — insulate the power semiconductor from the heatsink by separating the two with an electrical insulator such as a mica washer or silicon pad.

Typically, both sides of the insulator are covered with silicon thermal grease. The purpose of the grease is to fill any microscopic air pockets that would otherwise exist between the materials because air is a very good insulator. This produces air-free joints which minimize the thermal resistance through which heat must flow and reduces the temperature rise where different materials are joined. It is important to use just enough grease to fill the voids, but no more than that or the additional grease itself will serve as a thermal insulator, increasing the thermal resistance.

Let’s illustrate these concepts by designing a heatsink that will allow us to extract the maximum performance from a LM309 five-volt voltage regulator IC which has a maximum power dissipation of 20W 2. The LM309 was chosen because the manufacturer conveniently provides data that relates the device’s power dissipation, required heatsink thermal resistance, and ambient operating temperature which will allow us to verify our calculations.

First, it is interesting to note that the test conditions for the electrical characteristics specified for the device were taken at a junction temperature, Tj, of 25°C, which implies the device is either mounted on an infinite heatsink or the environmental temperature during the test was reduced by air conditioning. The datasheet also states that the maximum operating junction temperature for this device is only 125°C, so we will design the heatsink so that the device temperature does not exceed this value, although a more conservative design would use a lower value such as 100°C.

Finally — by way of comparison — Note 3 in the LM309K datasheet also states that the thermal resistance of the TO-3 case to ambient air, θCA, is approximately 35°C/W. Thus, without a heatsink, power dissipation is limited to less than 2.9W, also in good agreement with the result shown in Figure 5. 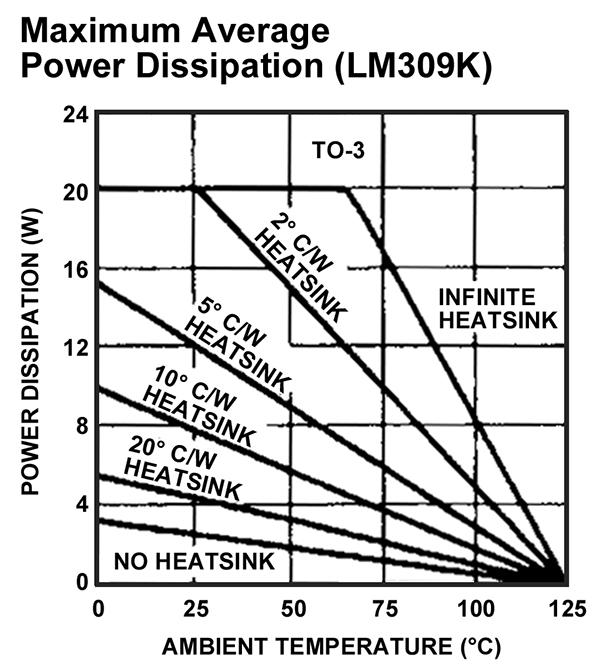 FIGURE 5. Maximum average power dissipation (LM309K)2. The arrow indicates the point on the figure that demonstrates that a 2.0°C/W resistance heatsink is able to dissipate 20W of power at an ambient temperature of 25°C which agrees with the sample calculation discussed here.

It is important to maintain the junction temperature of semiconductor devices below their operating limits in order to ensure the device’s reliability, service life, and performance. Usually, the most cost-effective approach to accomplish this is to physically connect the device to a heatsink by way of a conducting path with low thermal resistance.