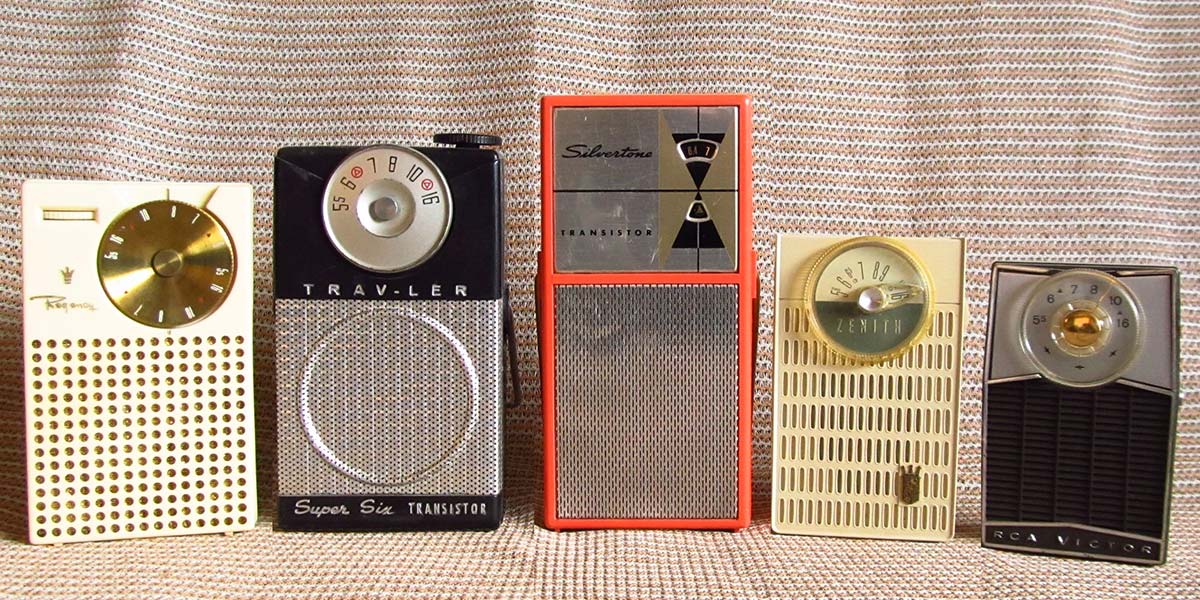 When Texas Instruments developed a process to mass produce transistors in the early 1950s, they wanted to show the advantages over tubes to spur marketing. The main benefits of the devices were their small size and low power requirements, so they decided a transistor pocket radio would be a good product to introduce the technology to the public.

They contracted I.D.E.A. (Industrial Development Engineering Associates) of Indiana to produce the first transistor radio under their Regency brand. The TR-1 pocket radio was introduced just before Christmas 1954 and sold for $49.95. Of course, the battery was “not included.”

Options included a leather case for $3.95 and an earphone for $7.50. An early advertisement is shown in Figure 1.

FIGURE 1. Early advertisement for the TR-1.

Despite its high price, Regency sold the first run of about 100,400 TR-1s before introducing the TR-1G (which was re-designed with a PNP output transistor) in 1956.

There are a number of good websites to learn the history of the TR-1, and one of the most complete is www.regencytr1.com. The site is run by Don Pies, the son of Regency co-founder John Pies.

The radio I’m restoring in this article (Figure 2) was featured on an episode of the PBS series “History Detectives.” 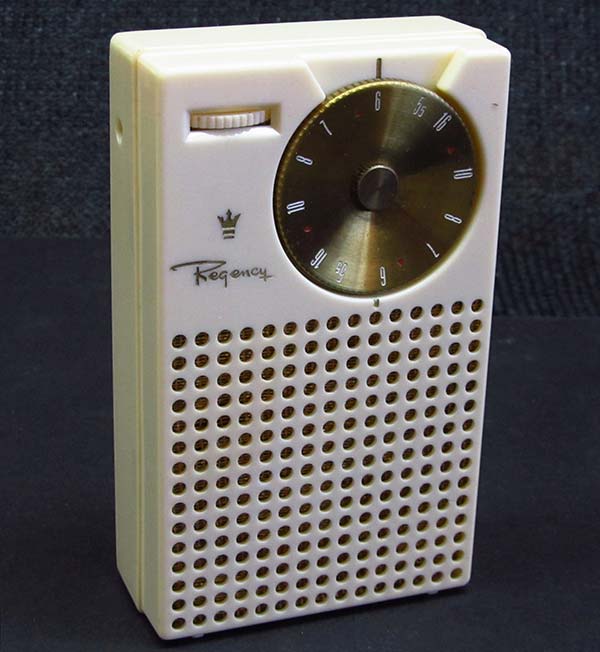 The question for the ‘detectives’ was whether this was the oldest transistor radio in existence. The question really was never answered because the actual production serial number on the commemorative TR-1 they found was not revealed. The video can be seen at www.pbs.org/opb/historydetectives/video/2285042567. The radio segment starts at 28:45.

After having the radio featured on the program, I started to wonder what it actually sounded like 62 years ago. Starting around 1960, the market was flooded with six-transistor pocket radios — with many of those made for American companies.

The 1954 TR-1 had only four transistors with a single audio stage driving the speaker, while the later six-transistor units invariably had an audio amp stage following the volume control and feeding push-pull outputs through a driver transformer.

The speaker in the TR-1 was a 2.75” Jensen — larger than most of the ‘60s pocket radios — so it might sound okay. Like most of the TR-1 parts, it was probably the smallest speaker Jensen made at the time. 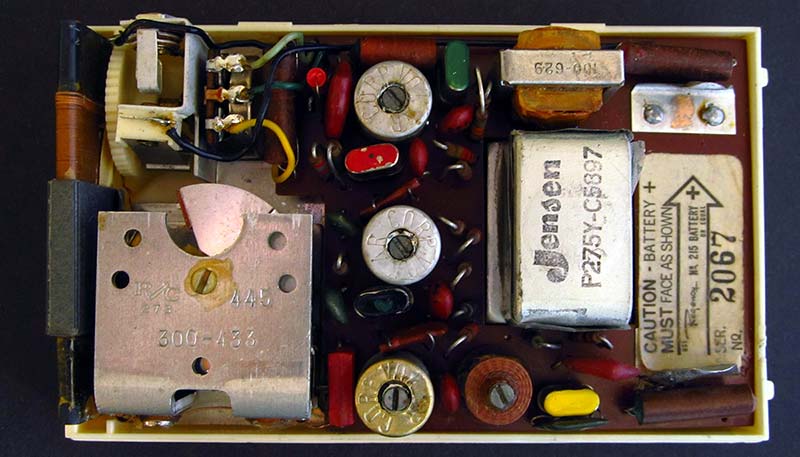 FIGURE 4. The chassis of this unit.

A Regency TR-1 in average condition usually sells for several hundred dollars on auction sites. A rare pearlescent blue unit sold in 2000 for $3,200. None are really expected to operate, only to ‘show’ in collections. My unit — perhaps one of the oldest transistor radios in the world (based on the low 2076 serial number) — required careful handling. I expected all four electrolytic capacitors to be open or shorted. What I found (in addition to that) was one shorted transistor and an open primary on the output transformer.

Obviously, a “parts” unit was needed to proceed. After watching auction sites for a few months, I bought one unit with a badly broken case, and also a bare chassis with a few missing parts (Figure 5). 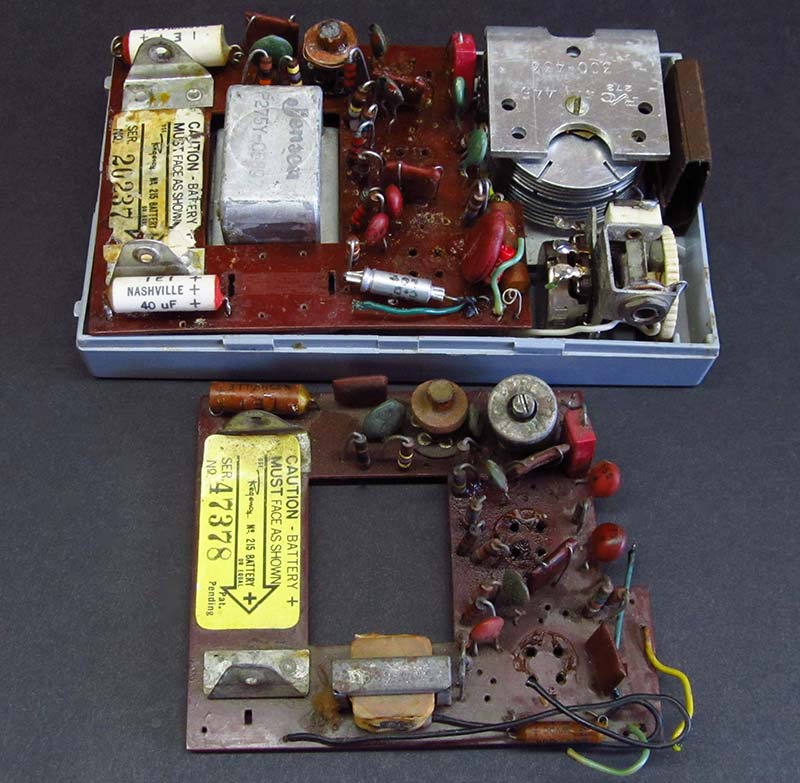 I noted color codes on all the transistors and pulled them for testing. Other than the color codes, the germanium transistors had no part numbers, just a Texas Instruments logo on the side made with a rubber stamp (Figure 6). I have read that the coding was primarily to show junction capacitance, so, the better units could be used in the converter and IF stages, and the higher capacitance transistors in the less critical audio stage. 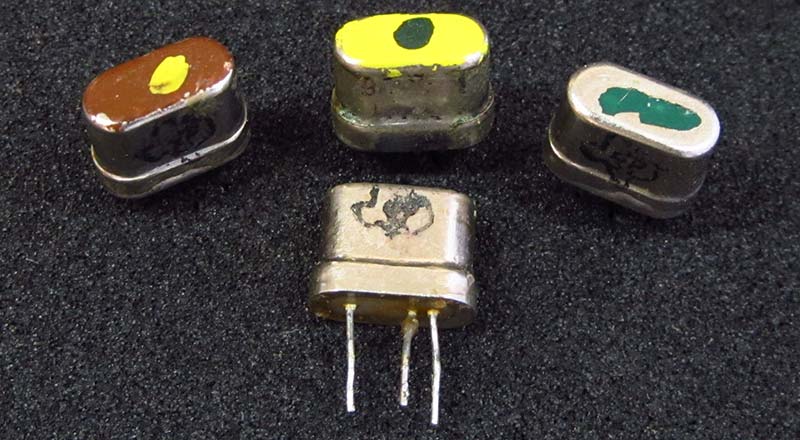 When I tested them, all the transistors showed a huge amount of reverse leakage compared to later transistors. I chose the best transistors and set them aside. I then replaced the bad output transformer. The next issue was the capacitors.

Of the four electrolytic capacitors, three were open and one was shorted. My first attempt was to drill out the tubular units and slip a modern capacitor in the cardboard sleeve. It was important to keep the cardboard-sleeved capacitors, as all the early units used that type. Later units (starting around serial number 20,000) alternated between cardboard and ceramic sleeves.

Figure 7 shows the two types. I couldn’t drill out the units without destroying the sleeve, so I went to plan B. 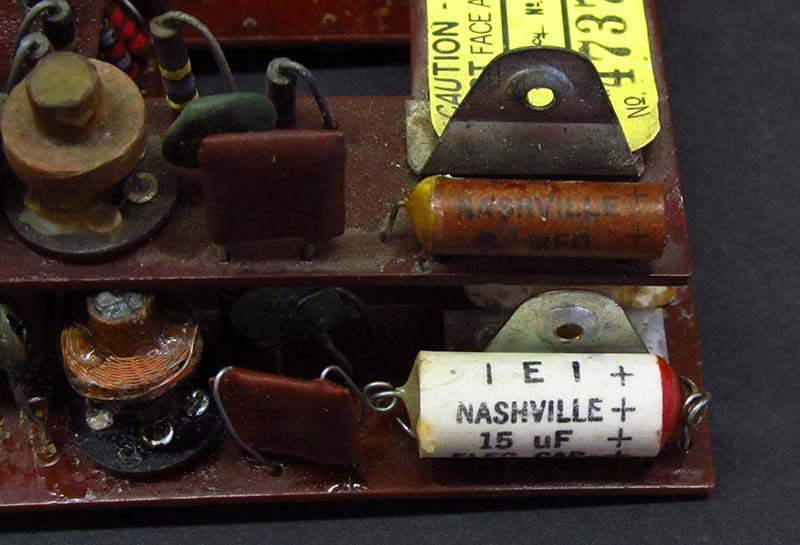 I located some tiny electrolytics and mounted them on the back of the board (Figure 8) — they are not visible when the unit is assembled. For the shorted capacitor, I drilled a hole through the printed circuit board (PCB) the size of the lead that just misses the board trace on the rear. The important part of this is that the new capacitors can be removed without a trace if a buyer wanted this unit in all-original condition. 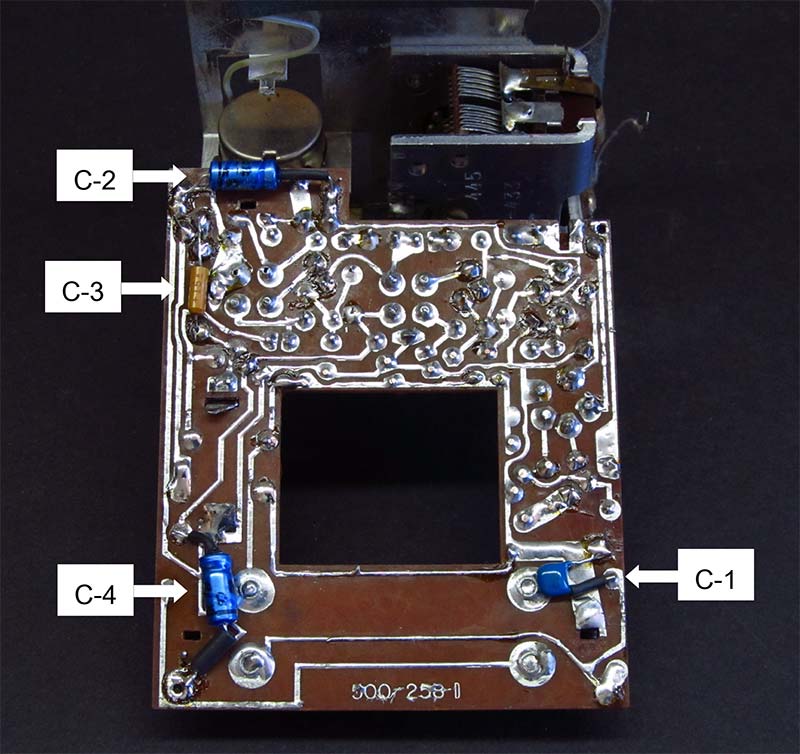 FIGURE 8. Miniature capacitors were needed for the 1/4" space.

I installed the transistors and held my breath as I brought up the voltage on my bench power supply. At about 14 volts, I heard some noise from the speaker and saw that current was about as expected. I cranked it up to 22 volts and rotated the tuning dial. While I live in a poor area for AM radio, our one good AM station came in “loud and clear.” Well, maybe not so loud, but it sounded quite good considering that the speaker was still not in the case.

Sensitivity was not so great, so I decided to do an alignment. Having replaced one IF transistor justified a trim, considering their lack of uniformity. If you had a bad transistor when this was under warranty, Regency would replace the transistor and neutralizing capacitor as a pair.

I melted the wax off the IF transformer slugs and tried to turn them. The first one I tried, the whole coil moved in the case and a lead broke off. I pulled a transformer from my parts chassis and again heated the rest of the IFs to melt any remaining wax.

After easing out all three slugs, I lubricated them with lithium grease and screwed them back in. I then did an alignment at the factory specified “262KC” using a 400 Hz modulation and measuring level at the speaker. Sensitivity came up and a couple more stations came in. At this point, I re-assembled the radio.

I think Regency originally chose the NEDA #215 (Eveready #412) battery because it was a good fit and readily available. The flat 22-1/2 volt battery was commonly used in photo flash units and had a pretty good current rating as well (140 mAh).

The battery became rare over the years and was discontinued by the major manufacturers in the late 1990s. A couple of companies are now producing a drop-in alkaline equal, but they don’t look like the originals. 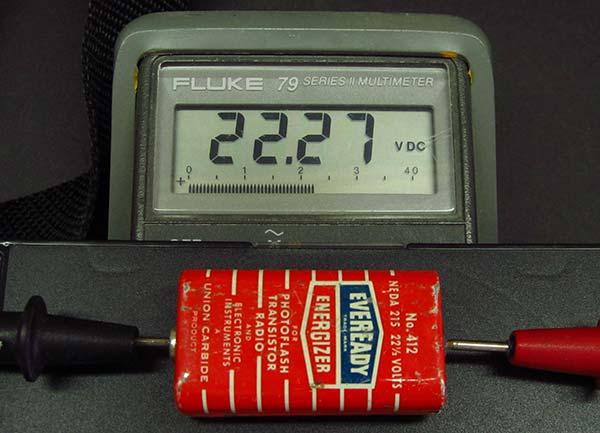 FIGURE 9. How could this battery measure good?

No, it didn’t. It showed zero volts as expected. What made it work, however, was my stuffing seven lithium CR1632 cells inside the case (Figure 10). 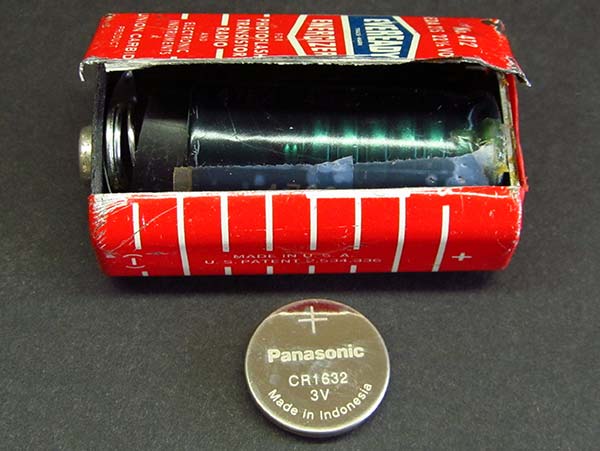 I slipped some heat shrink around them to prevent shorts and added a spring to make up the distance to the end terminal. Coincidentally, the CR1632s produce the same 140 mAh as the original #412 — so I was truly simulating how the radio worked when new. Figure 11 shows the battery in place in the completed radio. 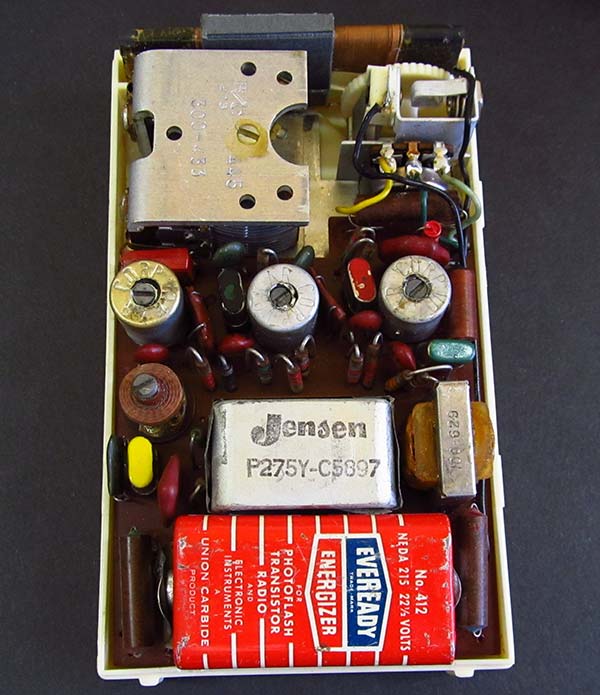 FIGURE 11. The restored radio with battery in place.

Since the Regency TR-1 was the first, there’s really no comparison to be made with other pocket radios. It sounds better than I expected and richer than some of the later radios.

Later ‘50s American-made transistor radios were larger ‘beach’ versions sold by Sears and others, while the Japanese radios — especially those made by Sony — continued to get smaller.

Sony’s ‘keychain’ ICR-120 (1968) was the first radio with an IC and had a tiny 1” speaker, but it was Regency that really started the miniaturization trend by producing the world first “pocket” size transistor radio.  NV