The Golden Age Of Electronics

For decades, the underlying assumption has been that everything electronic inexorably progresses to something smaller, faster, more powerful, and less expensive. Microprocessors, RAM, and other high-profile components seem to follow this trajectory. However, most other components, electronic test equipment, and most consumer electronics seem to have fallen off of the evolutionary path. Most of the components and electric devices manufactured today are lighter and cheaper — but to the point that they’re apparently disposable. Quality isn’t a descriptor that comes to mind.

Take test equipment. It seems as though there are two classes: the commercial gear that starts at $1,000 and the affordable, imported units that consist of a few chips in a case enclosing predominantly air. In consumer electronics, it seems that current offerings are mere shadows of their counterparts manufactured in the recent past. So, should we conclude that the Golden Age of electronics — at least in the US — has passed?

While I’m a realist, I’m not ready to throw in the towel just yet. There are islands of innovation in the domestic consumer electronics industry that have not only resisted, but have leveraged the assault from cheaper imports. Case in point, my Fender Champion 600 — a five-watt, tube-type practice amplifier (www.fender.com). It’s not clear from the markings where the amp was manufactured, but the components are predominantly Chinese.

I had contemplated buying a tube amp with a richer sound. The hand-built boutique amplifiers were out of my budget range, and I didn’t want an inexpensive solid-state amp with only simulated tube sound. As a compromise, I decided to rework the amp with top-grade US components. In searching the web for said components, I found a reference to Mercury Magnetics (www.mercurymagnetics.com) that markets a variety of amplifier components, including a complete upgrade kit for the Champion 600. After reading a few favorable reviews, I ordered the kit. Within a week, the kit arrived in a small — but deceptively heavy — box. It contained a power transformer, audio output transformer, a choke, a handful of capacitors and resistors, a 15-watt six-inch speaker, and instructions on CD.

The replacement transformers are manufactured in California. In addition to the heavy iron, I decided to replace the Chinese manufactured power tube and the Russian-made preamp with tubes by Groove Tubes (www.groovetubes.com), manufactured in San Fernando, CA. These domestic tubes are more expensive than their import counterparts, but to my ears, the improvement in sound quality with the Groove Tubes is well worth the price difference. 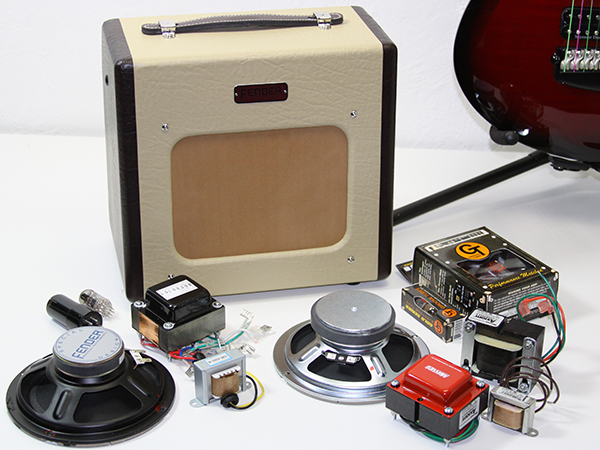 In all, I spent about three hours upgrading my amplifier. I had to drill holes in the steel chassis to accommodate the new transformers, rework the circuit board with a Dremel, remove and then add a few components. On paper, the improvements were significant — lower hum level, better power supply regulation, and a speaker capable of handling the full output power of the unit.

An additional two pounds of iron and handful of components don’t guarantee better sound. However, the sound created by the upgrade was beyond my expectation. The sounds were thick and rich as I’d come to expect from a high-end, tube-type amplifier. The upgrade wasn’t cheap, but it was a much better value than the available alternatives. And I had fun in the process.

Of course, this is just one example of how upgrading existing electronic equipment — regardless of make — with domestically manufactured components can be a path to nirvana. Of course, with enough money, you can simply buy something better. As an electronics enthusiast, what would be the point in that? After all, anyone can take out their plastic and buy a piece of equipment, use it for a year, toss it in the trash, and buy another. However, few can modify an amplifier or other piece of equipment and have fun while doing it.

Has the Golden Age of Electronics passed? Perhaps in some aspects of the commercial world. But as we enthusiasts go, we’re making a golden age of our own. NV