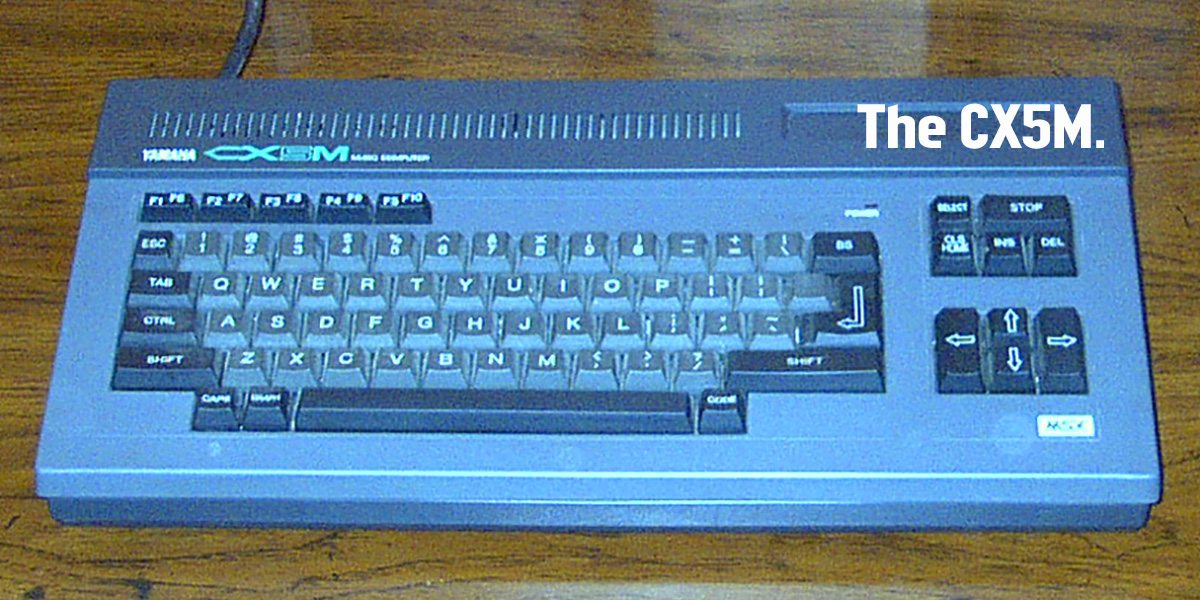 These days, recording music on a PC is a surprisingly straightforward affair. Once you master a program like Cakewalk’s Sonar or Steinberg’s Cubase, it’s a matter of if you can dream it up, you can record it. With programs like Sony’s Acid, you don’t even need to be much of a musician: just layer various loops to taste and you can start making music.

Back in the 1980s, it was a different story. Back then, we had to walk barefoot in the snow for miles — uphill both ways — to get to our local music store and use stone knives and bearskins to record our music. And we liked it just fine, dagnabit!

Well, no we didn’t because, actually, we had to use the first generation of mass produced computer music technology and it was pretty brutal.

A case in point was the Yamaha CX5M, sold as a complete, modular music system. It essentially put the guts of a Yamaha DX21 synthesizer inside of a CPU with a QWERTY keyboard and MIDI interface. To control it, the keyboard/CPU had a multi-pin connection designed to accept a 66-key music keyboard (the kind with black and white keys, not ones that say QWERTY on them — that was Yamaha model number YK10, incidentally).

It wasn’t touch sensitive and it lacked a pitch-bending wheel, but it had a decent feel to it.

The computer used a Z80 chip as its microprocessor and MSX as its operating system (www.faq.msxnet.org), which was popular in the early ‘80s in Europe, Asia, and South Korea, but made few inroads into the US.

The DX21 synthesizer inside of the CX5M was the baby brother to Yamaha’s enormously popular (and more expensive) DX7 (there’ll be a test later on all of Yamaha’s model designations), which popularized a new form of synthesis: digital frequency modulation — FM, for short. Its pure, bell-like tones were seemingly used on every hit record made in the 1980s and used examples of DX7s can be found in music stores to this day.

The CX5M didn’t have a dedicated monitor; instead, an adaptor cable with an RF output was designed to be used with a standard TV, much like the original Atari 2600 and other early video games. I ended up using an old 14” turret dial TV for my CX5M. But that’s okay, the graphics in the CX5M were no great shakes — we’re not talking Apple Macintosh here.

The CX5M’s CPU accepted data two ways: it had an Atari-like cartridge interface and Yamaha produced a variety of cartridges for the machine (more on those in a moment). Like older, 1970s era computers, you could plug a cassette recorder into it. Originally, this was used simply to save programs and files created by the user, but a year or two into the (short) lifespan of the CX5M, Yamaha released a couple of tapes to reprogram the CX5M’s synthesizer with new sounds. One tape was mostly musical instruments; the other was mostly sound effects.

How Did It Sound?

Curiously for a unit marketed by Yamaha (at least in the US) towards musicians and heavily advertised for a year or two in music trade magazines, the unit didn’t boot directly to the synthesizer. Instead, when first turned on, it defaulted to a DOS prompt and the user had to type “Call Music” to get into the synthesizer. Great engineering, fellas!

Once it was activated, though, how did the synthesizer sound? Pretty good, actually — it was capable of very high quality sounds. (They were very clear and bright, though. I found that I needed to warm many of them up by running them through chorus effects, phasers, and flangers to get sounds that “sat” in recordings better.)

Like its big brother — the DX7 — the CX5M was especially good at mimicking tones that already had a bell-like quality to them: there were great electric piano, tubular bell, xylophone, and glockenspiel sounds.

The problem was that it was a bear to program these sounds — both programming new sounds and programming compositions based on those sounds. One of the first cartridges that Yamaha introduced for the CX5M was the YRM-101 FM Music Composer software, which allowed for writing scores on a staff-like interface on the screen. 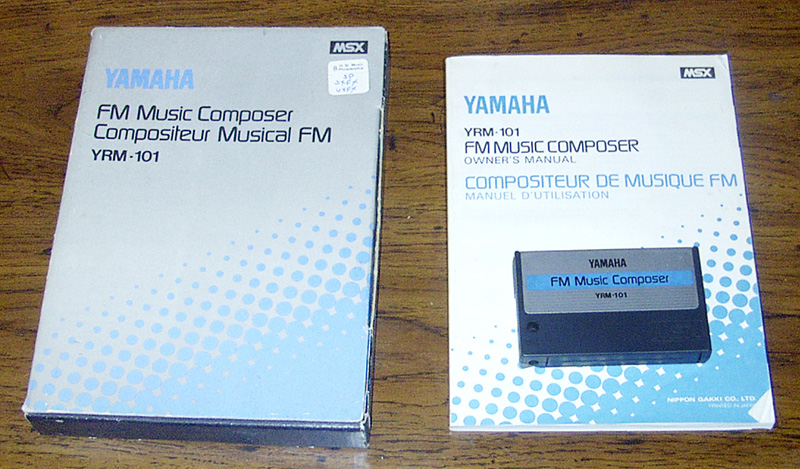 As I recall, it didn’t allow for much — if any — recording of real time playing, so everything had to be entered via the keyboard — a daunting task.

MIDI was a relatively new concept when the CX5M debuted, having only been developed by Roland, Oberheim, Sequential Circuits, and other musical electronics manufacturers beginning in 1981. However, it was well established enough by 1985 that the CX5M came equipped with MIDI in and out jacks. 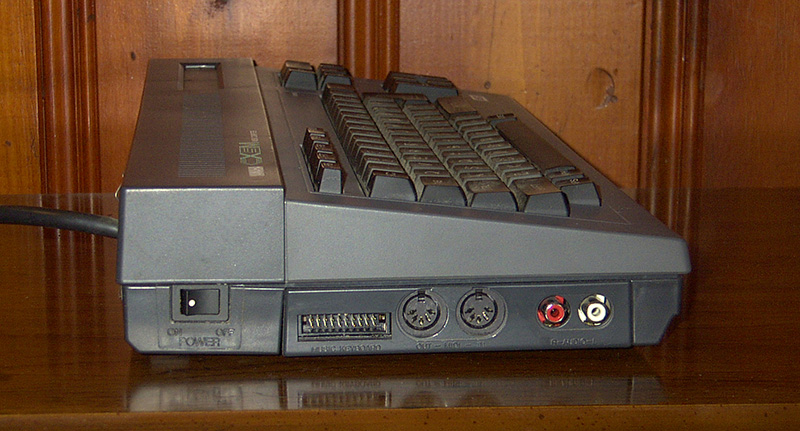 I recall mating the unit to my Roland TR-707 drum machine and using the CX5M to sync up drums with compositions I wrote using the Music Composer cartridge and recording both the CX5M and the drum machine simultaneously to my four-track cassette recorder (not exactly Vangelis or Peter Gabriel territory, but you have to start somewhere and, remember, this was pretty much the state of home music recording in 1986).

Another early cartridge for the CX5M was catalog number YRM-103, their DX7 voicing program. It was designed to simplify the programming of Yamaha’s then-flagship DX7 synthesizer — a daunting task for even the most experienced electronic musician.

Eventually — and I’ll bet I wasn’t alone — I simply ended up using the computer’s synthesizer almost exclusively and playing it in real time on recordings. Like I said, you couldn’t program it — but it sure sounded pretty good when you played it.

lso, just as with the DX7, reprogramming the synthesizer in the CX5M for new sounds was extremely difficult and I suspect that — just as with the DX7 — most musicians relied primarily on the CX5M’s presets and additional sounds, such as those in their voice data cassettes.

Stepping Stone to the Future

Even up to the 1970s, the synthesizers of the past were bulky machines with seemingly hundreds of cables dangling from telephone switchboard-like interfaces. The first all-synthesizer score in Hollywood — for the 1956 sci-fi classic Forbidden Planet by the husband and wife musician team of Louis and Bebe Barron — took three months to complete and utilized equipment that filled their Manhattan, NY apartment.

Today, an average personal computer — even a laptop — can record music, duplicate all of the great  synthesizers of the past, and allow its users to create new sounds, as well.

It took a long time, though, to get to this point and the Yamaha CX5M — even if it was difficult to program — put some great sounds in the hands of its users.  NV