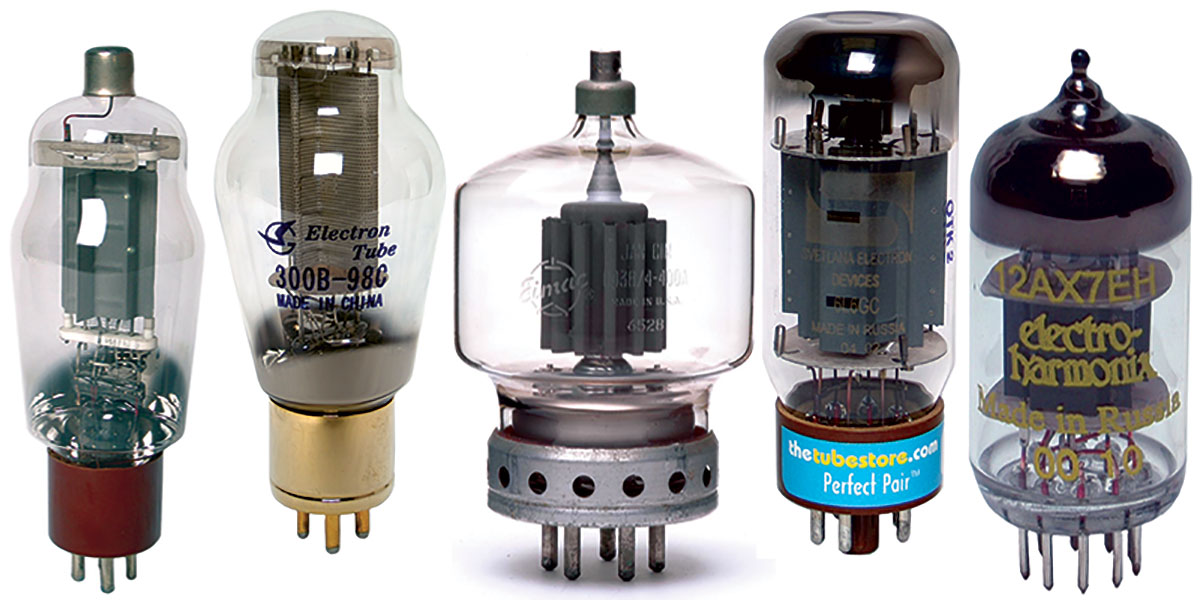 Not much has changed

The engineering challenges of the hot cathode vacuum tube — an invention dated 1906 — are the same today as they were then. The inventing of new, more compact and efficient vacuum-tube designs proliferated madly up until the 1950s, but the art has been frozen ever since.

Before Fleming’s diode and de Forest’s triode Audion, inventors like Crookes, Tesla, and Roentgen had experimented with the magical effects of high voltage in vacuum. They created emissions of intense light and of strange rays, including x-rays. The “Fleming valve” was an evacuated glass envelope in which a light-bulb-style metallic filament — fed by low voltage and sucking high current — incandesced at 2,000°F. This created an electrical activity (or, in quantum parlance, “electron flow”) that conducted unidirectionally through a vacuum to another nearby element — a metallic plate charged to a high positive potential. Thus was born a new rectifier, and hence, also a radio detector. Later, it was discovered that electrical activities within a tube could be leveraged at will by applying small fluctuations to a metallic grid interposed between the filament and plate (de Forest). Thus, human ingenuity created an amplifier, and hence, a modulator, an oscillator, a regulator, and an electronic switch. Also created was a means for huge magnifications by regenerative feedback (Armstrong). 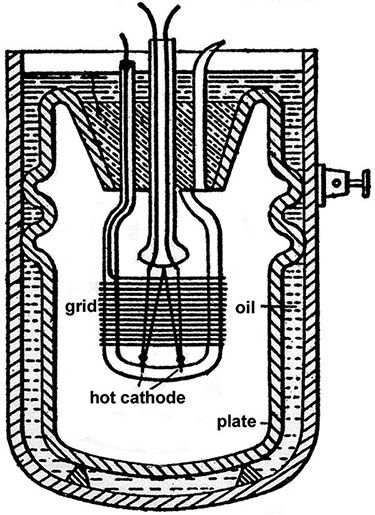 Magnetic fields influence electrical phenomena within a tube, as in the magnetron and the cathode-ray. The vacuum tube became the foundation for almost all of electronics for the next 50 years. Until the mass production of the transistor in the late 1950s, electronics was the vacuum tube.

Post-transistor, the conventional hot cathode vacuum tube — despite its headaches for any engineer, builder, or user — has hung in there as a common choice for high-power transmitter finals. You can number this writer among those who revere the 811 and the 807 for this purpose. For the ham or broadcaster’s kilowatt rig, the big 4-400A often wins out against the clustering together of power transistors.

The vacuum tube has seen a revival lately among audiophiles, who find in the vacuum tube ineffable qualities of depth, color, and warmth not found in solid-state.

With a few exceptions, vacuum tubes are almost completely out of manufacture in the USA. Dealers often go to Chinese or Russian sources, like Sovtek. The Russian military has a special respect for tube technology and uses it in the electronics of aircraft, tanks, and ships. Why? Because tubes are 10,000 to 50,000 times more resistant than solid-state to destruction by an EMP.

The hot cathode vacuum tube is a challenge to engineers and builders because of its heat (mostly generated by that hot cathode filament) and because of its demanding power requirements. Blower-cooling is often necessary to dissipate waste heat. Large currents from heavy iron-core transformers are required to fuel the cathodes of these fragile, glass-enclosed devices. Also, high voltages from special power supplies are required to fuel the plates: from 150 to 4,000 volts of well-filtered DC at a few hundred mA. Power supplies, and the transformers with which to build them, are expensive and hard to find.

Because of the transistor’s moderate power requirements, and because of its compactness, electronics engineers pounced upon the invention as soon as it went into broad manufacture in the late 1950s.

Similarly, in the early ‘50s, the magnetic amplifier (Figure 4) was seriously entertained, and even manufactured, as an alternative to the fragile vacuum tube.

The mag amp was superior to the tube and transistor in current and voltage capacities, more simple (you could build one yourself), and far more rugged in all respects. (See “The Magnetic Amplifier, a Lost Technology of the 1950s” in the Nuts & Volts February ‘06 issue.)

Appreciate the engineering challenges within the vacuum tube itself. Cathode temperature and plate potential are the key values in tube designing. The output (“emission”) of a hot cathode depends upon filament temperature. So, it’s desirable to achieve the highest possible temperature. Yet one must engineer the tube so it attains a long life before the delicate filament inevitably burns out and the tube becomes useless. So this sets limits to temperature.

The higher the plate voltage, the greater the electrical flow, but, at a certain high heat, there is a temperature-limitation barrier beyond which no increase in plate voltage will increase that flow.

Congestion of flow can also arise from an excessive build-up of electrical charge in certain spaces within the tube. This congestion sets a space-charge limitation to any conventional tube’s performance. The proximity and shape of tube elements and the size and design of the envelope itself can enhance or mitigate space-charge problems.

Capacitance effects — especially at high frequencies — pose another design challenge. Each pair of tube elements constitutes a small capacitor that can affect amplification and oscillation. The larger the elements, the lower the frequency limit. Efforts to make the vacuum tube more compact created miniature and “acorn” tubes.

A tube can self-oscillate due to internal capacity effects. Internal capacity is exploited in a positive way in the power-amplifier circuit called tuned-plate tuned-grid (Figure 5).

In the 1930s, when some exploratory vacuum-tube engineering was still happening, P. T. Farnsworth obtained a series of patents on a cold cathode vacuum tube (Figure 6). 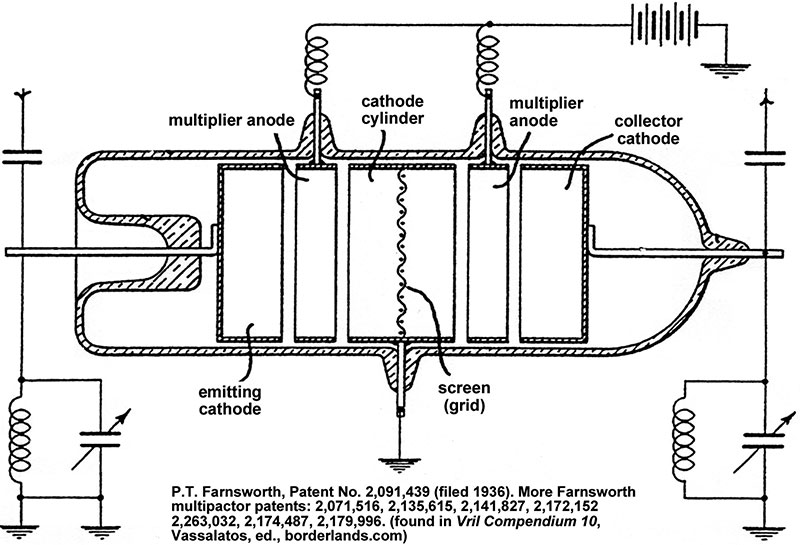 A cold cathode tube? But where does that necessary “cloud of electrons” come from?

Conventional tube theory and the whole history of the amplifying tube’s development would have you believe that the only way electrical activity can be created in a vacuum is by “thermionic emission” from a hot cathode. (The same mythology prevails in traditional fluorescent lighting.) But Crookes didn’t use hot cathodes in his evacuated spheres and tubes, nor did Tesla in his vacuum lighting devices or in his “rotating brush” detector. Effects are achieved by disturbances within the tube caused by the application of alternating currents, usually of high potential, generated by induction coils or by high-frequency Tesla coils.

Farnsworth’s cold cathode multipactor amplifying and oscillating tubes were high-frequency inventions made for radio transmitting. Their range was 200 kHz to 60 MHz.

Says Farnsworth in his patent, “All that is necessary to set the tube into oscillation, is to energize the anodes, as there will be, in the space between the cathodes, a sufficient number of free electrons which are accelerated toward one or both of the cathodes by the potential of the anode, to strike thereon and cause the initiation of secondary emissions.”

The tube is tuned to resonance in a way analogous to the tuned-plate-tuned-grid transmitter shown in Figure 5. Some of Farnsworth’s other patents show the tube set into a magnetic solenoid.

Farnsworth said repeatedly in his patents that these devices are “over unity.” Regenerative feedback and resonant reinforcement appear to be involved. The fact this device works without a hot cathode implies that plenty of electric energy can be set free in a vacuum tube if it is properly stimulated. (Free-energy seekers take note!)

Perhaps the invention’s over unity potential explains why this novel tube never made it into manufacture, despite the fact that it liberated engineering from the problems of the old hot cathode. Did the invention just fall between the cracks like so many others? It did get a feature story in Radio Magazine (October 1934). Was the multipactor passed over because it was perceived as another “disruptive technology,” like the electric car?

I’ve built a mag amp, but I’ve never been tempted to construct a vacuum tube from scratch. However, reading these old patents makes me want to go shopping for a vacuum pump.  NV