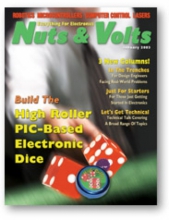 As an electrical contractor and licensed X-10 Pro Installer, I get to work with X-10 extensively. As the owner of Shepard Engineering Concepts, I've designed several X-10 interfaces including the X-10 Voice Recognition Control System in the Dec. 2000 issue of Nuts & Volts (which is available on the 'chalkboard' section of their website), and a Visual Basic computer interface which is located on my website @ [url=http://home.att.net/~dennis.shepard]http://home.att.net/~dennis.shepard[/url].

Light-Emitting Diodes (LEDs) have been around since the mid-1960s. They have nearly replaced incandescent lights as indicators and in digital displays. They're even making inroads into AC line-operated lights. In particular, traffic stop-lights are now often made with LEDs. However, LEDs are not incandescent lamps. They have many qualities of their own, some quite surprising. This article will discuss the general characteristics of LEDs, practical applications, and some of the more unusual...

Ham operators who have passed "only" the Technician class no-code license are discovering there is a lot more excitement out there than just yakking back and forth over an FM repeater. Someone has told them there are all sorts of long-range voice and data capabilities in the "weak-signal portion of the bands." You know, the very bottom of the six-meter band, the two-meter band, the 222 MHz band, the 430 MHz band, and even excitement at the top of the 1.2 GHz band...

HOW TO CRAFT A SMALL-WART

This Small-Wart is designed to supply 7.5 to 9 volts of DC, at up to 60 mA. That's as close in smoothness to battery power as you are likely to need. While it can be used with many consumer audio products, I have incorporated design features that recommend it specifically to electric guitar players who need to power a variety of sound effect pedals ("stompboxes") in a stage environment...

Many people flash their brake lights by manually pulsing their brake pedal, in order to get more attention from the driver of the 10,000 pound SUV approaching them from behind.

Having been professionally involved in circuit design many years ago, I recently found myself longing for the unique odor of smoking flux and the burnt fingertips gained while soldering a small component into a circuit. A quick scout around the web showed that many people are now using microcontrollers (MCUs) to implement logic, and that the development tools needed are often free or relatively cheap. Since I also enjoy low-level programming, this was too good to pass up, and I resolved ...

In The Trenches
by Gerard Fonte
IN THE TRENCHES
This is the first in a series of columns that looks at the business perspective of electronics. This is about the things learned from experience, rather than from a textbook. This is about practical electronic design direct from the trenches. Hence the title. The idea is to show how to design better with real-world examples and from lessons learned the hard way.

Laser Insight
by Stanley York
LASER INSIGHT
Last month, we took a quick look at some different photosensors and their relative usefulness when applied to the detection of high-speed optical pulses. Some of the disadvantages with light-dependent resistors (LDRs) and photovoltaic-type semiconductor sensors were pointed out. The photoconductive-type diodes are generally accepted as being probably the best (in terms of speed, anyway) among the laser industry. Photoconductive diodes can be made very small...

Let’s Get Technical
by James Antonakos
LET’S GET TECHNICAL
This month, I am beginning a series of technical articles on a wide range of topics, from analog and digital electronics, to microprocessors and microcontrollers, computer arithmetic, networking, and computer science theory. Some of the future topics I will be examining are...

Micro Memories
by Edward B. Driscoll, Jr.
The Altair 8800
The Altair — as it was initially sold — was little more than an incredibly difficult to assemble computer kit — basically a computer case with some circuit boards and a processor. It also initially had next to nothing in the way of peripherals.

Stamp Applications
by Jon Williams
STAMP APPLICATIONS
I've been programming BASIC Stamps for almost nine years now and I can say without hesitation that the last couple of months have been the most fun. The new PBASIC editor actually makes the BASIC Stamp seem like a brand new microcontroller. Have you ever owned an old car that you loved so much that you had it painted instead of trading it in and suddenly, that old car seems like it was brand new?

Robotics Resources
by Gordon McComb
$200.00 And-Up Robot Kits
For this month, we'll discuss 10 major producers of high-end robot kits, and catch the others in future columns. Ready ... set ... we're off!

Just for Starters
by George Whitaker
A Close-Up Look At Soldering
Making a solder joint "pretty" as well as functional is an art. However, making them functional is the purpose here and maybe you will be a little more artistic than me.