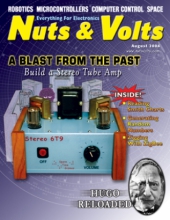 A Blast from the Past

It’s not very often that a guy gets to witness “the changing of the guard” during his lifetime, but I’ve been fortunate enough to do just that. As the years have gone by, we’ve all seen technology change in unimaginable ways that stun us with “gee whiz” events. December 8, 2003 marked the beginning of the end in an era of vacuum tube LORAN “C” (LOng RAnge Navigation) transmitters.

I discovered LEDs back in 1974, and thought they were the coolest thing ever. I was still in high school at the time and I was just starting to play with TTL. While others my age were out partying and chasing girls, I was getting my jollies by watching red LEDs count in binary. That’s probably why I didn’t have a lot of friends.


The Man Who Invented The Future

Hugo Gernsback was the world’s first futurist — one who not only speculated about the future, but also worked to make it happen.

After reading this introduction to the Smith Chart, you will have a better understanding of impedance matching and VSWR — common parameters in a radio station.

Sometimes, it would be convenient to connect a cell-phone style headset to a computer for telephony or video conferencing.

The Enigma Machine generates high voltage pulses that are safe to play with. In the first two installments, we saw how to build it and witnessed some of the more obvious strange effects. The vibration effect (where a dry finger brushes an empty soda can on the machine causes a vibration, but a damp or stationary finger does little) is probably the most apparent. This month, we'll look at some of the less obvious — but still very strange — effects. We'll also show how you can transfer an electric

Just for Starters
by Mark Balch
JUST FOR STARTERS
A reader’s letter suggested that I explain the basic electrical units used to describe DC circuits. These units are electric potential (expressed in volts, V), current (expressed in amperes, A), resistance (expressed in ohms, W), and power (expressed in watts, W). Understanding how these quantities relate to each other allows you to perform basic circuit analysis...

Near Space
by L. Paul Verhage
NEAR SPACE
This month, we are going to make one (or more) temperature sensors for a HOBO data logger with external channels. The work doesn’t end there, however. To turn the data our sensor records into the readings we require, we’ll need to determine the equation that calculates the temperature from recorded voltage readings. From there, we will produce a chart of temperatures versus elapsed time.

Open Communication
by Louis E. Frenzel
Open Communication
We seem to be on a path leading to a totally wireless electronic lifestyle. The progress has been continual over the years, thanks to semiconductor technology and other advancements. More recently, there has been a flurry of announcements that make wireless everything possible. ZigBee is an important aspect of this.

Personal Robotics
by Mike Keesling
PERSONAL ROBOTICS
This month, I would like to take a few words to update everyone on the progress of some of my other projects, tease you with some new ones, talk about some things that don’t warrant a whole article, and talk a little philosophically.

Stamp Applications
by Jon Williams
STAMP APPLICATIONS
Yep, I’m still a real man, alright. I still live in the great state of Texas, drink milk right out of the carton, leave the toilet seat up, and — in addition to the five remotes I have to run the electronics in my entertainment center — I can now control anything else in my home from my Pocket PC. Yeah, buddy, I have enough control to make Tim Allen grunt with manly-man joy.

The Design Cycle
by Peter Best
THE DESIGN CYCLE
Think of a number between 0 and 10. Is your number 3? Did I guess right? If I guessed right, would you say that your mind generated a random number and I just happened to be lucky enough to guess what it was? Or, do you have an affinity to the number 3? Do you have three kids? How about three cars? Why did you come up with the number 3? If I missed the guess and your number was something other than 3, how did you come up with that particular number? Was your choice of numbers really random?