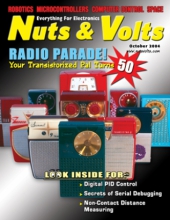 In 1954, the world was a far different place than it is now. Almost anything electronic required vacuum tubes — an invention dating back to the beginning of the 20th century that had yet to be improved on.

Multiplexing To Get More Outputs

Developing applications for a Palm device can be costly. Not only that, but it can be confusing and difficult. However, it doesn’t have to be all that (well, not costly, anyway). Using free or very low-cost tools, you can get underway almost immediately and be developing programs that run on the Palm in no time.

One of the most common problems I encounter is leaving my soldering iron on, only to discover days later that I have ruined a good tip and wasted energy. I have a mechanical timer in my machine shop for a small air compressor.

Watchdog timers are an excellent way to insure that a microcontroller-based system continues to operate unattended if occasional failures occur.

In The Trenches
by Gerard Fonte
IN THE TRENCHES
The characteristics that are associated with engineers are both stereotypical and somewhat accurate. This month, we’ll take a not-too-serious look at some of these traits to see what they are. After all, it’s important to understand how others see the profession, as well as what features make someone a good engineer. (Note that the pronoun “he” is used for simplicity and brevity. Most hardware engineers are male; however, more women are entering the field every day.)

Just for Starters
by Mark Balch
Building an Event Counter
Counters are a basic digital logic building block and have a multitude of uses.

Near Space
by L. Paul Verhage
NEAR SPACE
I like to collect data. If I can send a near spacecraft (NS craft) to 100,000 feet and return data on cosmic rays, I’m in heaven (or maybe it’s near heaven). For most people, though, they want to see photographs. To them, your backpacking trip to the bottom of the Grand Canyon isn’t interesting unless you can share photographs.

Open Communication
by Louis E. Frenzel
OPEN COMMUNICATION
In my August column, I wrote about the new ZigBee wireless system. In this issue, I want to complete the coverage of the various short range wireless options available today.

Stamp Applications
by Jon Williams
STAMP APPLICATIONS
The night is drawing closer ... my favorite night of the whole year: Halloween. I love Halloween — the costumes, haunted houses, parties, and friendly exchanges with trick-or-treaters; Halloween is the best. When I have the chance, something I like to do is build Halloween-oriented props and decorations and you can bet that many of those props get some sort of automation via the BASIC Stamp microcontroller.

The Design Cycle
by Peter Best
The Design Cycle
For some, debugging is the not-so-fun part of developing hardware and software applications. Whether you’re designing complex subsystems for fighter jets or putting the finishing touches on that pet microcontroller project in your workshop, be certain that debugging will be part of your design cycle.