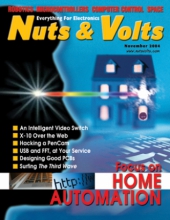 Designing a circuit board for ease of manufacturing can help insure your project stays on schedule.

Use Your Boombox as a PA System

I was pretty satisfied with my home entertainment setup. The TV was connected to a cable box, VCR, and a DVD player through a RadioShack ([url=http://www.radioshack.com]http://www.radioshack.com[/url]) four-way audio/video selector (model 15-1976). This particular unit is a push button model, which is both inexpensive and reliable. Having to manually switch inputs didn’t seem to be much of a hassle to me, since — for the most part — you had to get up to insert a tape or DVD, anyway.

The vast majority of USB devices available on the market today have at least one thing in common: They all use microcontrollers to implement the task at hand. Whether it’s in the form of a USB serial engine sharing the same piece of silicon with a microcontroller or a simple connection between the two on a printed circuit board, the use of a microcontroller for just about any USB-based task is virtually inescapable ... that is, until now.

Recently, I needed to acquire some temperature data from multiple remote locations and decided to avail myself of the phone system. For the data acquisition unit, I decided to use an Atmel ATmega 8. This processor has plenty of horsepower for the task and a high performance A/D converter.

Glue Your X-10 Devices to a Webpage

Micro Memories
by Edward B. Driscoll, Jr.
25 Years Into the Future — 1980s The Third Wave
Many science and science fiction writers have written books that predict the future. By the 1970s, a term was coined for these sorts of authors: futurists. Few books, however, got the future — the future that we’re living in right now — as right as Alvin Toffler’s The Third Wave, which celebrates its 25th anniversary in 2005.

Stamp Applications
by Jon Williams
I2C Again — and the Case for Continuous Improvement
I get the idea that a lot of BASIC Stamp users have discovered the fun and utility of the myriad (over 1,000) of I2C devices available today — even those users that don’t have the BS2p or BS2pe with the built-in I2COUT and I2CIN instructions.

Near Space
by L. Paul Verhage
Modifying a PenCam for Use in Near Space Applications
I like to collect data. If I can send a near spacecraft (NS craft) to 100,000 feet and return data on cosmic rays, I’m in heaven (or maybe it’s near heaven).

Let’s Get Technical
by James Antonakos
Shrinking Bits — A Second Look at Digital Data Compression
Last time, we examined the applications for lossless and lossy data compression methods. In this second look at digital data compression, we will take a look inside these different compression techniques: