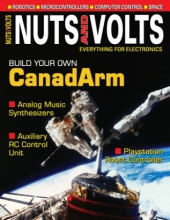 Build your own CanadArm

There is no doubt that synthesizers have changed the face of music over the past 30 years. Synthesizers’ initial impact was in the area of “academic” music, since their almost brutish size, extreme complexity, and exorbitant cost fairly much confined them to university settings. But as interested experimenters became more familiar with the concepts of electronic music, and the linear integrated circuit revolution kicked into high gear, homebrew analog synthesizers started to pop up..

An obvious solution would be to use a second transmitter/receiver system on a different frequency. At our field, this is not a viable solution because only a limited number of units are allowed to be airborne at the same time.


Weather Projects For The Electronic Enthusiast

Two easy undertakings for individuals who like electronics and who also like to watch the weather are presented in this article. Essentially, they are “nuts” and mostly no “volts” projects.

This article will show you how to build your very own electronic analog neuron, named the “Perceptron.” Creating a single neuron may not seem earth shattering in the grand scheme of things, considering that your brain has over 1010 of them! However, a neuron is the fundamental building block of intelligence.

Stamp Applications
by Jon Williams
Playstation Robot Controller
For all the columns I’ve written, clearly one of the top three in reader interest was called “PlayStation Control Redux” (September 2003) where we delved more deeply into the PlayStation controller protocol work started by Aaron Dahlen. Well, between then and now, Parallax released the SX/B compiler for the SX micro and the speed issues we dealt with when using a BASIC Stamp are no longer issues. That, and Ken is building a cool new treaded robot that might need a full-featured control device...

Let’s Get Technical
by James Antonakos
Why I Am Glad My Computer Crashed
In my roles as an educator, author, and columnist, I utilize my computer extensively. There are many specialty software applications I use for drawing schematics, writing code, creating graphics, and working with images. I also use common applications such as Word, Excel, Email, and Internet Explorer.

Getting Started With PICS
by Chuck Hellebuyck
A Primer For Beginners
A third category of feedback involves readers that have little or no electronics background and with all the different programmers, compilers, microcontroller choices, software options, etc., they are confused and afraid they would waste a bunch of money and still not get what they want. I’m here to tell you it isn’t that difficult and it doesn’t have to cost that much to get started.

Near Space
by L. Paul Verhage
The “Blame It On CanadArm” Robotic Arm
As you know, the Space Shuttle often carries an extraordinary robotic arm in its payload bay. The arm, called the CanadArm in recognition of its origin, is Canada’s contribution to the Space Shuttle program. In my near space program, I often attempt to design near space versions of real space items. So, in recognition of the CanadArm, I have developed my version, the “Blame it on CanadArm.” In this article, I’ll describe how I constructed this arm.

In The Trenches
by Gerard Fonte
Stress - Oh No!
Sometimes stress is defined as that "overwhelming desire to pound the living daylights out of something." Unfortunately, stress isn't explained that easily. Stress certainly includes frustration and anger. But it's also present when you get married or divorced, get a new job or lose your present one, and even when you play video games. Sometimes stress is good. Sometimes it's physical and other times it's emotional. There are many different types and causes of stress.