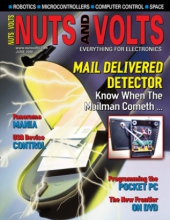 Since the early years of last century, plastics have transformed our lives in numerous ways. Our modern lifestyle would be unthinkable without heavy use of all kinds of different plastics. While plastics have a variety of useful properties, electrical conduction was not counted as one of them. That was until 1986 when a conducting form of polyacetylene — a so-called conjugated polymer — was discovered...

A typical Pocket PC sports a 200 MHz CPU along with 64 MB of RAM and a 65,000 color LCD — all within a case designed to fit in the palm of your hand. Additionally, these devices usually run a version of Windows CE as their operating system, making it easy for us to develop applications for them, given the right tools...

In early 2006, Spacecraft Films released a six DVD set titled Project Mercury: A New Frontier, containing 24 hours of footage from America’s pioneer space efforts. Coming at the height of the Cold War, this was America’s first attempt to put a man into space — culminating, of course, in President Kennedy’s famous challenge to land a man on the Moon within the same decade...

USB interfaces are now the dominant port available on PCs, with several available on nearly all machines. With the parallel port nearly gone and typically just a single serial (RS232) port available, simple ways to control devices through USB have become essential...

Interface Your PC To A Portable Digital Multi-Meter

The RadioShack 22-812 multimeter is one of the most popular meters you will encounter. It touts many features found on much more expensive meters, one of which is an RS232interface. When I first saw this meter, my geek alarms started ringing. Wow! Just think of what I could do with a digital multimeter with a RS232 interface...

Like to shoot panoramas with your hand-held digital camera, but don’t like the final “stitched” results? Cure hand-held problems with this easy-to-build, two digital camera panorama shooting platform utilizing a modified infrared remote.

This handy gadget will end those many unfulfilled trips and indicate via a lit LED and/or sound alert that your mail has been delivered. After you pick up your mail, you simply press a reset button and your Detector is ready for the next day’s mail delivery.

Stamp Applications
by Jon Williams
Spin, Baby, Spin
Well, this month we’re going to wrap-up our intro series on the Propeller multicontroller, and I’m going to show you what I think is the best feature of the chip — the ability to run multiple processors at the same time, even when programmed in the high-level Spin programming language.

Personal Robotics
by Phil Davis, Joe Stramagila
Zen And The Art Of Zigbee - Part 3
In this last article of the series, I want to talk about using Zigbee in a Star configuration, which will allow you to drive multiple robots from your PC, addressing each one in turn, or sending a broadcast which all will respond to. I also want to show you how to “hack” the Freescale Sard card so you can take PWM directly off the card, giving you the ability to proportionally control two motors. In addition, we’ve also built a small robot as a demonstrator.

Open Communication
by Louis E. Frenzel
TV On A Cell Phone
I suppose it had to happen. You can do almost everything else with a cell phone these days like play music, take digital photos, send and receive text messages and emails, play games, and even surf the Internet. Why not TV?

Getting Started With PICS
by Chuck Hellebuyck
Using The PIC External Interrupt
Life can throw you in many directions and how we deal with it builds our character. This happened to me recently while trying to get this article out for Nuts & Volts...

The Design Cycle
by Peter Best
Easy Arm Hardware
As promised, this month we’ll combine everything hardware we’ve covered up to now and put an LPC2136 system on a professional printed circuit board (PCB). Once we’ve walked around the building of the ARM hardware, we’ll put on our ARM programmer hats and put that new piece of ARM hardware to work...