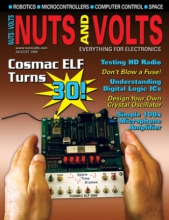 As a retired clinical chemist, bio-engineer with a PhD in experience, one of privileges I have is being sent all over the world with expenses paid. I’m a teaching consultant for both government and non-government organizations, but I often act as a repair technician. (Tough job, but someone has to do it!) If you fix it, you are a hero. If you don’t, no one seems to care as no one else has been able to fix it either. It’s a win-win situation. And you meet a great number of nice people...

A deeper look at the ‘74’-series of digital ICs, and at various sub-members of its TTL and CMOS families. Part 2

It was 30 years ago this month that Popular Electronics magazine ran their “COSMAC Elf” construction project. Unlike its more famous cousin — the Altair 8800, which appeared just a year before — the Elf was a microcomputer project that anybody could afford. In the days when an 8080A chip alone cost $300, the entire Elf could be assembled for something like $80. That made the COSMAC Elf the first microcomputer for many experimenters, especially poor high school students like me...

by Michael A. Covington

As many of us have discovered the hard way, the output of a good microphone is weaker than any other kind of audio signal. If you want to use your stereo amplifier as a PA system, or view your speech on an oscilloscope, or use a high-quality dynamic mic with your computer’s sound card, you need more amplification...


Design Your Own Crystal Oscillator

If you would like a circuit that is useful in obtaining a high-accuracy, low distortion RF source capable of driving a 50 ohm load, then you’ve come to the right place. The circuit in Figure 1 is the schematic for a common collector series tuned Colpitts crystal oscillator.

Open Communication
by Louis E. Frenzel
Testing HD Radio
Back in the April ‘04 issue of NUTS & VOLTS, I introduced some of you to digital radio broadcasting. It was mostly a theoretical discussion because there were few stations on the air and even fewer radios available. But today, digital radio — now called HD Radio — is actually here.

Stamp Applications
by Jon Williams
Stepping Out With Spin
Are you ready to get some motors spinning? Yeah, me too. As we saw last month with the BS1, to get more performance we have to think differently. With the Propeller chip, the entire paradigm is different and we are, in fact, forced to adapt...

The Design Cycle
by Peter Best
Temperature/Humidity Monitor
This month, we’ll explore a useful application that employs the services of UDP to send detailed temperature and humidity data over an LAN in your home or through the routers and hosts that make up the Internet

Personal Robotics
by Phil Davis
Designing A Mini Sumo - Part 2
For those just joining or the uninitiated, a Mini Sumo Robot and Mini Sumo competitions take their name from the Japanese form of wrestling called Sumo. In this case, two robots (smaller than 4 x 4 inches) combat in a black ring just over 30 inches in diameter, bounded by a one-inch border. For three minutes, each robot attempts to locate the other and push it off the edge...

Getting Started With PICS
by Chuck Hellebuyck
Multiplexed LED Displays And Relays
For this article, I wanted to demonstrate how to control two LED displays from one set of I/O pins in a method called multiplexing. To make this into a project for the reader, I revisited a model rocket launch control box design I did back in high school (long time ago) for an electronics competition...