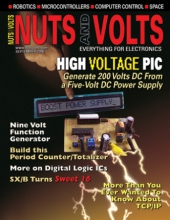 Welcome back! Last month, we printed the schematics for the Elf 2000 and discussed the operation of every part of the circuit. This month, we’ll print the parts list, talk about the construction and testing of your Elf 2000, say a few words about the available software, and then finish up with ideas for expansion...

I was doing a robotics show and needed a way to both attract contestants and display contest results. I had seen a couple LED signs and decided one would be perfect for this kind of application. My only requirement was that the cost had to be reasonable and the sign needed to be easy to transport and hook up...

Add another “mighty weapon” to your arsenal of bench test equipment. There are many situations where this build-it-yourself period counter has advantages over your frequency counter.

Stamp Applications
by Jon Williams
SX/B Turns Sweet 16
There are those — the pessimists among us — that will insist that you can’t get anything worthwhile for nothing; everything has a price. Not so with SX/B. While it may not compete with big, “professional” compilers, in the right hands (i.e., yours) and with a few tricks, SX/B is quite capable and costs absolutely zero dollars. And with the cost of the SX-Key programming tool and SX Proto Boards so low these days, it’s really hard to ignore the SX micro as a viable solution...

Personal Robotics
by Phil Davis
The Saga Of The Silver Bomber - Part 1
One day Jerry came across some broken Silver Bomber scooters at an industrial surplus house he frequents in town. Talking to the owner, he discovered they had multiple palettes of the stuff lying around. Originally, the owner wanted $35 a scooter — not too bad considering they sold new for $199 plus...

Near Space
by L. Paul Verhage
Near Space Booms And Sounds
THIS MONTH, WE'LL LOOK AT two near space experiments. The first one is an engineering test and the second a traditional space experiment.

The Design Cycle
by Peter Best
The Land Of TCP/IP
In this edition of Design Cycle, we’re going to march cross-country into the land of TCP/IP. Although the same hardware used to transmit and receive UDP datagrams can be used to transport TCP/IP packets, TCP/IP is a bit more complex to code than UDP. However, that’s not going to stop us from getting a microcontroller version of TCP/IP up on a LAN...

Getting Started With PICS
by Chuck Hellebuyck
Real Time Clock
One of the more interesting things I've discovered about the readers of Nuts & Volts is their diversity. Through the emails I've received from writing this column, I've discovered that both hobbyists and professionals read these articles.