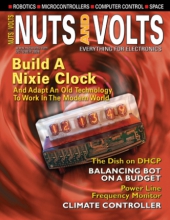 Spreadsheets can be used to perform a number of useful, repetitive, and complex operations.

Let's build the power supply we designed in part 1and write the software needed to drive the PIC in a freely downloadable version of the C language. Part 2

A close look at the popular ‘4000’- and ‘74’-series of modern CMOS digital ICs and at CMOS basic usage rules in this final installment. Part 4

Back To The Future With Nixies

Unlike LEDs and LCDs, Nixie tubes are pretty objects made of glass that display glowing numbers or letters — perfect for “count-downs.” Their visual appeal has been embraced by moviemakers who have employed Nixie tubes as count-down devices of bombs about to explode...

The frequency of the power coming into your house is 60 Hz, right? (at least it is in the US). Everybody knows that right? On a mailing list that I read regularly, there was recently a long, heated discussion about frequency stability of the AC power that's in our houses...

LCDs range in size and capability, from the typical wristwatch display, to medical EKG monitors and advanced aviation-cockpit displays. Character (non-graphical) LCDs can be easily incorporated within microcontroller designs, as seen in Figure 1. This article provides a low-cost, one-chip solution for interfacing a microcontroller to an LCD...

After building a temperature and humidity display — which confirmed my suspicions that my workroom really was making me hot (32° C) and bothered (85% H) — I decided that the answer was to control my environment. Thus, the Climate Controller was born.

Open Communication
by Louis E. Frenzel
The Ultimate Wireless Hobbyist
Wireless has been a hobby for well over 100 years. And looking back, I have actually been a wireless hobbyist for most of my natural life. I have tried almost all aspects of this hobby and have witnessed an amazing evolution along the way...

Personal Robotics
by Phil Davis, Brandon Heller
Building A Balancing Bot On A Budget - Part 1
You were probably expecting to see Part 2 of the Saga of the Silver Bomber here, instead of this article on a Balancing Bot. To cut a long story short, we left off last month on the Silver Bomber motor controller, with everything designed and just waiting for parts. So, we waited and waited, but only about half the parts came in. Unfortunately, everything appears to be back-ordered, most likely due to the RoHS (Restriction of Hazardous Substance Directive) which is all about ‘lead free’ parts...

Getting Started With PICS
by Chuck Hellebuyck
USB PIC Programmers
The emails keep pouring in and it’s great. Easy and instant feedback is what makes the Internet so awesome. Though a few people let me know they feel I’m just writing this to sell my stuff, most understand that my goal is to help everyone I can learn how to develop microcontroller-based designs using PICs. I also get several emails from people who have discovered a different Basic compiler and wanted to let me know about its great features. If it gets you programming, then I say go for it....

The Design Cycle
by Peter Best
The Dish On DHCP
DYNAMIC HOST CONFIGURATION PROTOCOL, OR DHCP, is easily understood by most folks as long as you don't start talking about the code behind it. When you've finished reading DHCP spin of Design Cycle, you'll be able to converse with the best of them about DHCP and how it works under the hood of a microcontroller...

Stamp Applications
by Jon Williams
Goin With The Glow
I’m pretty sure that Scott Edwards had no idea what he was starting way back in the early ‘90s when he released his first serial LCD. Back then, the target customer was someone like me — a BASIC Stamp 1 user who wanted a nice display but didn’t have a lot of spare I/O pins to support it. Well, as we’ve seen, serial LCD modules have become about as ubiquitous to electronics experimenters as the 555 timer chip. There are, however, environments that can present serious challenges to LCDs...