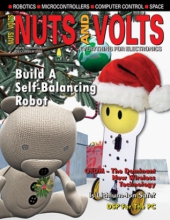 When Sony introduced the first lithium-ion battery in 1991, they knew of the potential safety risks. A recall of the previously released rechargeable metallic lithium battery was a bleak reminder of the discipline one must exercise when dealingwith this high energy-dense battery system....


Looking At The Other Three-quarters Of The World, Through ORION

LOOKING and ORION are a part of worldwide research efforts to make data from the ocean depths freely and instantly available to land-based research institutions for grid computing...


DSP for the PC

Digital Signal Processing (DSP) has revolutionized how we design and build filters, signal generators, and other audio circuitry. Usually when you think of DSP, you think of specialized processors from companies like Analog Devices, Motorola, or Texas Instruments. However, practically every modern PC has a sound card that allows it to function as an audio DSP. With the speed of modern processors, a PC is up to nearly any audio task where you’d use a traditional DSP chip.” ...

How about handing her a Valentine’s Day present that contains a raised heart surrounded by a bright red halo and plays Let Me Call You Sweetheart at the same time, or giving your favorite person a birthday gift wrapped in ribbons of blue electroluminescent wire with a lit LED panel name tag. An anniversary gift wrapped in silver paper and covered with 18 illuminated white tea roses is sure to please, as is a Christmas present enclosed in a seasonal tin adorned with a wreath of lights...

Nicole Kidman and Mel Gibson live down under. Does that mean we live up over? We learn at an early age which way is down. Down is where your feet are when you walk and down is the direction you fall. Gravity dictates the downward direction. If you found yourself aboard the International Space Station, you would be in zero gravity and couldn’t tell up from down...

A short time ago, I was working on a small digital project hat required the use of circuit-status indication lights outside of the building that the device was installed in. LEDs, of course, were the appropriate choice for these indicators and, because of obvious weather conditions, etc., I had to use some sort of “weather-proof” enclosure for the LEDs. On my workbench was a package of those very common pencil-topper erasers that are simply inserted over the end of a pencil....

Stamp Applications
by Jon Williams
Celebrating The Season
A key element in the Hanukkah ritual is the Menorah — a special candelabra used to commemorate the eight days of the celebration. This month, we’re going to build a Menorah — an electronic version, that is...

Personal Robotics
by Phil Davis, Brandon Heller
Building A Balancing Bot On A Budget - Part 2
For those who missed the October issue, or anyone who could use a refresher, we’ll start with a recap of the robot’s design. See Photo 1 for a look at the finished robot, balancing...

Getting Started With PICS
by Chuck Hellebuyck
Christmas Music
This month’s installment marks the conclusion of the first year of this column. I want to thank everybody who reads these articles for their support. Since it’s the December issue, I thought I would offer a project related to the holidays. I also wanted to tackle the subject of digital-to-analog conversion. To do that, I plan to have a PIC play a little Christmas music through a small speaker — kind-of like one of those Christmas cards that plays a tune every time you open it up...

Open Communication
by Louis E. Frenzel
OFDM - Orthogonal Frequency Division Multiplexing
Have you heard of orthogonal frequency division multiplexing (OFDM) yet? If not, your knowledge of communications techniques is definitely lagging behind the real world. Here is a quick look to bring you up-to-date on thiswireless technology that is being adopted across the board in most new communications and networking systems...

The Design Cycle
by Peter Best
ZIGBEE For The Evil Genius
OOK (On-Off Keying) modulation used in simple AM data radios is also a popular and inexpensive way to move small amounts of data between points A and B. Move up the stairs a few steps and you’ll find 802.11, which comes equipped to utilize the Internet protocols to form and maintain a network. If you’re using simple AM or FM data radios in a network, you’ll have to code most all of the application and network stuff yourself as you’re simply pumping bits out across the airwaves...