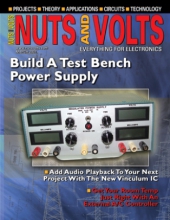 Add Audio Playback To Your Next Project

This article is all about utilizing audio files stored on a USB Flash drive in unusual applications. If all you want to do is listen to your favorite tunes, then that’s easy enough...

Here’s an easy way to set up a really cool and useful computer display configuration that will make friends think you’re a super-geek!


The Nuts & Volts of Podcasting

Over the past couple of years, podcasting has emerged as one of the great new buzzwords of the Internet, bringing the same freedom to create personal audio and video productions as Weblogs did for text at the start of the decade...

Have you ever noticed that national aviation events tend to pick up names based on where they occur? For example, the home-built Experimental Aircraft Association fly-in, conducted annually in August in Oshkosh, Wisconsin...

Last month, I introduced you to various anemometers that could be used in building your own weather station. In this article, I want to show you how to use additional sensors, but first I want to delve a little deeper into the 1-Wire interface...

A dual channel regulated bench power supply that you can build.


Beat the Heat with this External AC Controller

The summer of 2006 was brutal due to the heat and humidity. Air conditioning was needed to make it bearable. In my view, the need was greatest during the night when I wanted to sleep...


Getting Started With PICAXE Microcontrollers - Part 3

Last month, we interfaced the 18X with a Hitachi HD44780-based LCD display. Now we are ready to add a 12- or 16-key matrix keyboard and a piezo beeper to complete our I/O terminal...

In The Spotlight
by Marvin Mallon
An Inteview with Woolf Kanter of All Electronics
If you are looking for a wide variety of hobby and experimenter supplies, you just might want to do business with All Electronics Corp. This small, family owned and operated establishment is located in Van Nuys, CA...

Getting Started With PICS
by Chuck Hellebuyck
In-Circuit Serial Programming
The advantage to ICSP is the ability to program the PIC in-circuit.Now this may sound familiar since this is the same feature I’ve promoted about using a bootloader in a previous column.ICSP and bootloaders are similar in function,but the difference is...

Near Space
by L. Paul Verhage
Using Google Earth To Chart A Near Space Flight Plan
After my near space mission with the Adler Planetarium in Chicago this summer, Mark Hammergren of the Adler introduced me to Google Earth. I had heard of Google Earth before, but I hadn’t paid much attention to it...

Stamp Applications
by Jon Williams
Livin’ Life On The SX28
It occurred to me the other day that I’ve been programming in one form of Basic or another for over 25 years now ... wow, that seems like a long time! I taught myself to program on the venerable Timex-Sinclair 1000, my first “real” computer...

The Design Cycle
by Peter Best
Writing Your Own Set Of Drivers
The Microchip folks offer a free TCP/IP stack that works very well with the PIC18F67J60. That sets Microchip up a notch in my book, as there’s nothing better than a semiconductor manufacturer that offers a free support firmware package for its products...

Personal Robotics
by Phil Davis
Parameters On the Fly - Part 1
Whenever I build a robot, there are always variables and constants which need to be adjusted to make sure the bot does just what I want it to; the problem is, it’s usually a pain to change these. So, how can we make this better?