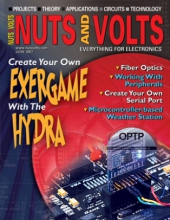 Create Your Own Exergame With The Hydra

Why does recorded music sound different from the real thing? When we walk into a room, we instinctively know if the music or speech we hear is live or a reproduction...


Create Your Own Exergame With The Hydra

Control Your World With An X-10 Interface

In the first couple of installments of this series, we used a PC to take measurements and display the results from our 1-Wire sensors. The major drawback for building a PC-based weather station is that the PC has to be on all the time...

I needed a seven-segment remote display that received its data from RS-232, and I wanted it fast. Here’s a little project that can be built in a weekend and will give you four digits of information...

Open Communication
by Louis E. Frenzel
Fiber Optics — The Invisible Communications Network You Use Every Day
The world has been rewired many times over the decades. Telegraph and telephone wiring came first. Then electrical power. (Yes, electrical power wiring actually came after the telegraph and telephone wiring. Doesn’t seem right does it?) ...

Getting Started With PICS
by Chuck Hellebuyck
C Language Introduction
In my April column, I did a speed-test comparison of various PIC® microcontrollers (MCUs) that were programmable in Basic, and then compared a Basic and C compiler. I made a mistake that affected the results...

In The Spotlight
by Marvin Mallon
An Interview with Neal Greenberg
This month’s spotlight is on Schmartboard™, a California organization located in the city of Fremont, situated north of San Jose. The principal product of the company is a cleverly designed prototyping board...

The Design Cycle
by Peter Best
Working With Peripherals
All good things must come to an end and this month’s installment of Design Cycle will wrap up our look at the C8051F120 microcontroller.

Developing Perspectives
by Bryan Bergeron
With the recent rise in global competition for technology and manufacturing jobs, professional associations, labor organizations, and political groups in the United States have begun to emphasize the need for innovation...

Are You An Innovator?
by Bryan Bergeron
There is no one correct path to becoming an innovator. By mastering experimental fundamentals, you’ll be in a better position to innovate.