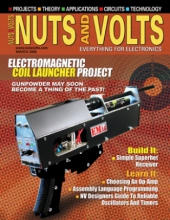 How To Choose An Operational Amplifier

There are probably thousands of operational amplifiers (op-amps) available. But which one is the best for your particular application? Learn how to wade through the jargon and select the op-amp that best fits your needs.

Common Problems in the Design of Digital Oscillators and Their Remedy

In his epic non-fiction Profiles of the Future, Arthur C. Clarke wrote that when a technology reaches the peak of its design, any changes are evolutionary, rather than revolutionary. And the electric guitar is no exception.

I had planned on showing you how to add an LCD receiver satellite in this series, but before I do, I need to show you how to utilize the new Maxstream Series 2 XBee modules. Maxstream no longer supports mesh networking utilizing the original XBee modules.

This circuit is just about the simplest, fully functional superheterodyne receiver one can construct with just a handful of parts.

Most conventional firearms operate by the action of expanding gasses forcing a projectile out of a barrel at high speed. The propulsion for these systems is the detonation of gunpowder that causes an explosion behind a projectile positioned in a tube (barrel) that is closed at one end (the breech). Systems that operate on gunpowder are extremely loud and leave residue in the barrel and action making them prone to malfunction and requiring considerable cleaning efforts for continued use...

Getting Started With PICS
by Chuck Hellebuyck
Assembly Language Programming
When I started programming microcontrollers (MCUs), assembly language was the only real choice. I didn’t even know what a compiler was. Now, it seems many beginners and even experienced programmers tend to fear — or at least try to avoid — using assembly language. I will admit that the latest variety of C compilers and Basic compilers make programming much easier, but I still feel it is necessary for a programmer to understand enough about assembly language to write a simple program...

Personal Robotics
by Vern Graner
Virtual Robotics
Can you work with robotics if you don’t have a robot?

The Design Cycle
by Fred Eady
PIC32MX Internal Addressing
I recently saw a sign that read, “Everything is hard until you figure out how to do it.” As an adversary of all things complex, I grinned to myself as I passed the sign by on the highway. The PIC32MX is a prime candidate to fall into the spin of the highway sign writer’s sage observation. However,someone on the Microchip PIC32MX team saw that same sign somewhere along the way as the road that leads to the understanding and application of the PIC32MX is paved with easy to use C language macros...

Open Communication
by Louis E. Frenzel
A Femto in your Future?
What the devil is a Femto? I suppose it had to happen sooner or later. With indoor cell phone usage as poor as it often is, it was inevitable that someone would come along to solve that problem. And here it is — the femto cell. It just could be one of the next big electronic purchases you make.

Near Space
by L. Paul Verhage
The 2007 Spaceward Games
Within a couple of decades, the United States will be reaping the benefits of a new space transportation system. It’ll be a green and affordable system capable of carrying tons of cargo daily into Earth orbit and beyond. Its affordability and reliability will initiate the full exploration and exploitation of our solar system. However, to reach this future, a couple technologies must first mature. This month, we’ll see how the Spaceward Foundation is helping to develop the two key technologies...

Stamp Applications
by Jon Williams
It’s in the Cards
It seems like at least once a year — and usually around this time of year — I remind myself (and you) that it’s okay to experiment. In fact, experimenting for the sake of experimenting is absolutely worth doing and we should all make time in our schedules for experimenting that doesn’t require or expect any specific results. Why? Well, we all get caught up in our dramas and the things that need to happen right this second, and oftentimes we spend more energy than required...

The Circuit Development Process
by Bryan Bergeron
There’s a deep sense of satisfaction that results from developing, building, testing, and ultimately using a circuit of your own design.