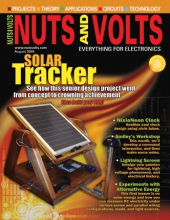 For those interested in high voltage phenomena, this device is for you.

Learn the fundamentals of renewable Energy with this new educational series. This month: Solar Energy.

Run your own game shows at home with this fun build.

PICAXE Primer
by Ron Hackett
Programming Your Serialized LCD Display
This month we’re going to turn our attention to some of the details of programming the display. Specifically, we’ll investigate two of the most useful features of LCD displays: scrolling a long line of text across the relatively small width of the display and creating custom characters to enhance the functionality of the display.

Personal Robotics
by Samuel Aaron Ward
Solar Tracker
A solar-tracking power supply for a mobile unit; a device that not only provides power to sustain its own functions (tracking the sun for optimal energy collection), but also for propulsion and steering of an unmanned vehicle.

The Design Cycle
by Fred Eady
USB To Ethernet Using Microchip’s Free Stacks: Part 1
This month, the mountain man is coming to town as the coders at Microchip have put together a brand new TCP/IP Stack to support the new Ethernet ICs and wireless Ethernet modules that are coming out of the pipe.

Open Communication
by Louis E. Frenzel
How To Achieve One Gigabit Per Second Data Rate Over Wireless
Longer distances, interference, and other environmental issues usually prevent that, but what we get is typically enough. With the new 802.11n standard, Wi-Fi speeds will be going up as more of the access points adopt the multiple input multiple output (MIMO) technology that will make 100+ Mbps common.

The Golden Age Of Electronics
by Bryan Bergeron
From Developing Perspectives