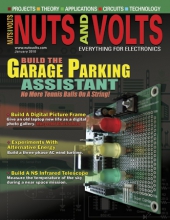 Learn how to program and access Win USB devices with this introduction to the firmware and applications. You can use it in your next project that utilizes USB.

Say goodbye to your teenis ball on a string! Now you can park your car in the garage easily and electronically with this cool device!


Turn A Broken Laptop Into A Digital Picture Frame

Give an old laptop a new life by turning it into a digital photo gallery.

Learn the fundamentals of renewable energy through this educational series. This month: Build a three-phase AC wind turbine.

The Design Cycle
by Fred Eady
SuperPIC to the 32-bit Rescue!
I also have the latest version of the MPLAB C32 Compiler for PIC32 microcontrollers which supports all of the new SuperPIC features. I don’t know about you, but having all of this development stuff in front of me says “Build something!”

Near Space
by L. Paul Verhage
Build a Near Space Infrared Telescope
Parallax has made available an inexpensive infrared thermometer that makes it possible to measure the temperature of an object just by looking at it. In this month’s article, I’d like to share how I used this thermometer to design a simple infrared near space telescope that measures the temperature of the sky during a near space mission.

Truth in Specifications?
by Bryan Bergeron
A recent book project of mine revealed manufacturers were either intentionally or unintentionally misleading consumers with product specifications that were confusing, incomplete, or simply false.