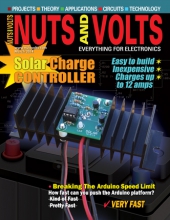 Admit it, we all like to do it — break the speed limit. Usually, it's just a little bit. Just how fast can you push the Arduino platform before it releases that magic smoke? Very fast, actually.

Graphical plotting, data acquisition, and control software for your microcontroller.

This reader-requested solar controller for charging 12 volt lead-acid batteries is very simple to build and will help keep your batteries in tip-topped off shape.

This neat little device will help you make those close calls in high speed competitive events.

Just when you thought there were no more cool electronic clocks to build, this Arduino-controlled version showed up.

TechKnowledgey
by Jeff Eckert
Events, Advances, and News (3.2014)
Topics to read about this time include squeezing out leakage; faster, cheaper SSD; a real crock; plus some other interesting stuff.

Smiley’s Workshop
by Joe Pardue
The Arduino Classroom — Chapter 3: How an Arduino Program Works
Get introduced to the basic concepts of an Arduino program, then use those concepts to keep counts and times so you can blink some LEDs in a pattern.

Near Space
by L. Paul Verhage
A New Airframe Design for Near Spacecraft — Part 3
Securing the more expensive internals of a near spacecraft to the airframe is the final — and perhaps most important — step in finishing the new design.

The Design Cycle
by Fred Eady
Setting Up Linux With Bones is a Piece of Pi
I'm a Microchip PIC kind of guy. However, when it comes to Linux, almost any flavor will do. The Raspberry Pi and BeagleBone Black are getting lots of press. So, instead of deciding whether to bake a Pi or walk the Dog, we are going to do both. In this installment of Design Cycle, we will make the crust and put a leash on the Dog.

Know Your Basics
by Bryan Bergeron
To master the art of electronics, it's important to learn the basics. I'm talking Ohms Law, serial and parallel discrete components, and simple signal sources.