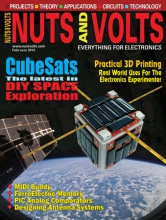 See how to construct your very own two-bit non-volatile memory using a seemingly magical material.

The radio antenna and its role in a radio system.


All About PIC Analog Comparators

Even though analog comparators are not especially exotic, they certainly rate as one of the most useful building blocks in a wide variety of circuits.


Getting the Most from Tech Support

With technology being such an integral part of our lives these days, sooner or later you’re probably going to have to call for help with something. Here are some suggestions on how to get the most from your experience from one of the guys who answers those phones.

This handy little circuit for “announcing” news or messages is an ideal project for beginners since it’s all through-hole parts.


The 8x8 RGB LED Matrix Display and the Arduino

Challenge your imagination with the vast functionality available with this colorful display.

New to MIDI? Then, you need a Buddy to experiment with and learn about this musical protocol.

TechKnowledgey
by Jeff Eckert
Events, Advances, and News (02.2015)
Read about a world’s record in data transmission, a real time translator, a new flavor of Pi, plus some other interesting stuff.

Q&A
by Tim Brown
Reader Questions Answered Here (02.2015)
Questions about the size of satellite dishes and why there’s a lump in your power cable are answered.

The Spin Zone
by Jon McPhalen
Load and Go!
Discover a way to selectively run multiple applications that wouldn’t normally fit into 32K of memory.

The Design Cycle
by Fred Eady
Numbats and Morays and Wi-Fi, Oh My!
Numbats and Morays and Wi-Fi, Oh My! Biologically, eels and anteaters are on the opposite ends of the animal world scale. Convert them to silicon and the combination of snouts, hair, teeth, and scales makes for a pretty good W-Fi sensor node development platform. This month's column takes the brand new Moray Wi-Fi development board and its Numbat networking module for a monitor and control spin on the Internet.

Near Space
by L. Paul Verhage
CubeSats — Part 2: The Basic Subassemblies.
Learn about some of the kits and basic subsystems that are now available for starting your own space program using CubeSats.

Practical 3D Printing
by Chuck Hellebuyck
A Custom 3D Printed Case for CHIPINO
Here’s an example of how to use your 3D printer to design a custom enclosure.