I'm trying to get information about the 70-volt audio distribution which is often found in commercial audio systems. How does it differ from the usual 4-8 ohm home stereo outputs? Is there some way a regular home style receiver with a 4-8 ohm output be used to drive a 70-volt system?

The 70-volt distribution system was developed to convert the output of a PA amplifier to a higher voltage so as to minimize power loss when speakers are located long distances from the amplifier. Plus it simplifies the connection of multiple speakers that do not have the same impedance. Let's use Ohm's Law to analyze the situation. Let's say that the round-trip distance between the speaker wires and the speaker itself is 100 feet, and we're driving an 8-ohm speaker at the other end of the line with a 100-watt amplifier. Let's further consider the round trip resistance of the wire loop is 8 ohms. It doesn't take a rocket scientist to figure this one out. Half the power will be lost in the wiring, delivering only 50 watts to the speaker.

Now if we increase the impedance of the speaker to 70 ohms, then the amplifier will see 78 ohms, not 16 ohms, which reduces the current in the hook-up wire — and the power loss. That's what a 70-volt distribution system does. It sends low-current, high-voltage down the line, where it's converted to high-current, low-voltage at the end via a 70-volt step-down transformer. This is exactly what the power companies do to deliver more power to its customers and loose less. In fact, high-tension wire voltages often run into the millions of volts. The higher the voltage, the less current, and the less power lost.

But that's just the tip of the 70-volt iceberg. The real strength with a 70-volt system is power distribution. Suppose you have a four-story office building and a noisy warehouse you have to pipe sound through. Let's also assume that the ceiling speakers are 8 ohms and that the PA trumpet outside is 8 ohms, too. Obviously, you don't want the office speakers at the same volume as the loading dock's. The 70-volt transformer balances out the sound using taps — not power wasting rheostats. Look at the drawing below. 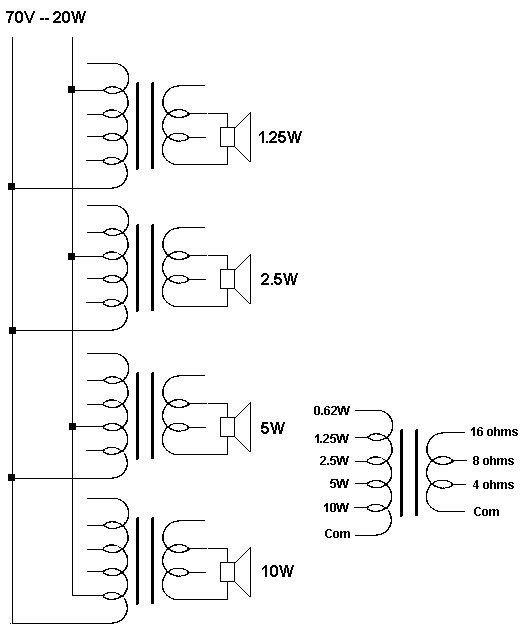 Notice that the primary has five taps, each of which is designed to deliver more or less power to the speaker. The higher the tap, the lower volume. This method also lets you mix and match speakers of different impedance's. So the ceiling speakers can be 4 ohms and outside speaker 8 ohms. The ability to adjust the volume while you mix-and-match is its strongest selling point.

Can you convert a regular 4-ohm amplifier to a 70-volt line? Sure! All you have to do is turn the 70-volt transformer around so that the secondary is the primary, and the primary is the secondary (the one that feeds the distribution line). Just keep the primary leads heavy and short to reduce power loss, and match the size of the transformer to the total needs of the system.