Many of the ham radio and PIC projects I do require a crystal. While the frequency and size are easy to determine, the load capacitance is a bit more difficult. There are many choices: series, 20pF, and an assortment of 12pF-32pF. Is there a crystal clear way to choose a value based on the schematic?

Certain crystals — most notably quartz — exhibit the property of piezoelectricity, where if an electrical pulse is applied across the face of a cut crystal, it causes the crystal to physically deform and ring like a bell. If this same crystal is placed into the feedback path of an amplifier circuit, it oscillates at a frequency dependent primarily on the dimensions of the crystal. The figure below shows the basic crystal oscillator configurations, and the electrical equivalent of the crystal. 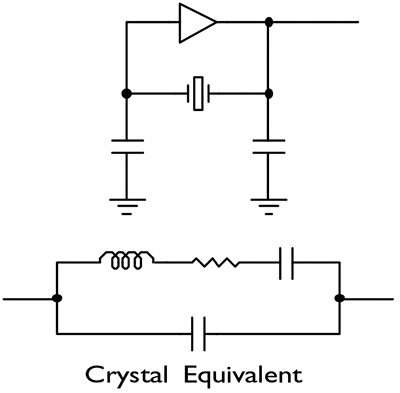 Let's examine the series-resonant circuit, which is the most common configuration, where the crystal is placed in a series path around the amplifier. The frequency of oscillation can be altered slightly by changing the capacitive loading on the crystal element. In this mode, the crystal's total reactance is slightly inductive and is in parallel with the oscillator's load capacitance, forming an LC tank circuit which determines the oscillator frequency. The loading capacitors are required to balance out the inductive element.

Now comes the clinker. You wanted a formula that would determine how much loading capacitance is optimal. Unfortunately, it depends on the cut of the crystal, the input impedance of the pin(s) involved, and the length of the wires or PCB traces from the crystal to the circuit. Fortunately, ballpark values often work quite well, so if you have a 22pF or 33pF cap in hand, either should prove effective. Just be sure to keep them close to the amplifier and equal in value.