I have a magnetometer driveway detector. When it senses a vehicle, I route a nine-volt signal to an interface box that’s watched by a recycled PC, which randomly plays WAV files that say “We are being  invaded” or something similar. My problem is that weather-lightning drives the driveway detector crazy. I have a lightning detector that sounds a buzzer for one second from a nine-volt battery when a strike occurs and I want the PC to check the detector and not play the message if lightning is found. How can I put the two together so that when the two events coincide, the PC won’t play the message?

What you need is an AND logic circuit with two diodes and one resistor. 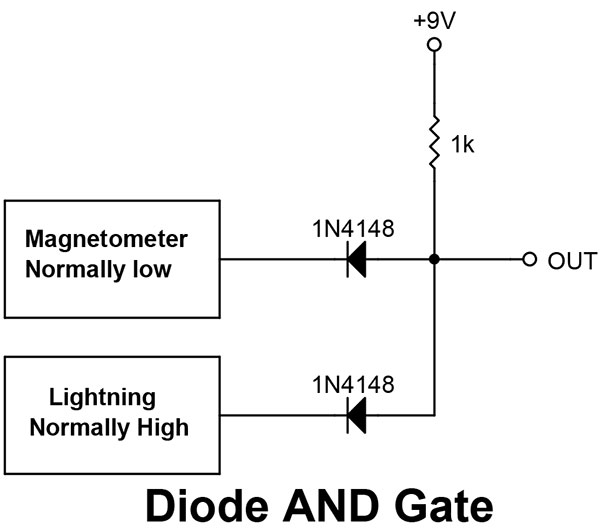 Your magnetometer is a logic low at rest, and a logic high when it detects a car or lightning strike. The MML101, on the other hand, is logic high until a lightning strike happens. Rather than trying to explain this in words, look at Table 1.

The way an AND gate works is that if either of the voltage sources are low, the voltage to the PC is about 0.7 volts. When both go high — the coincidence of no lightning and the presence of a car — the output goes high and sets off your PC’s WAV file.