I have a jukebox with many small bulbs — each receiving about 7.8 volts — that are starting to burn out simply because of old age. A cheaper alternative to replacing them is string "Christmas" lights, which are rated at 3.5 volts each. What size resistor do I need to make the voltage get closer?

I love old jukeboxes and until recently, had one in my den from the 50s, so I know the problem with replacement bulbs. The way to determine the correct resistance is to put a 100-ohm pot in series with the Christmas lights, wired as shown in below. 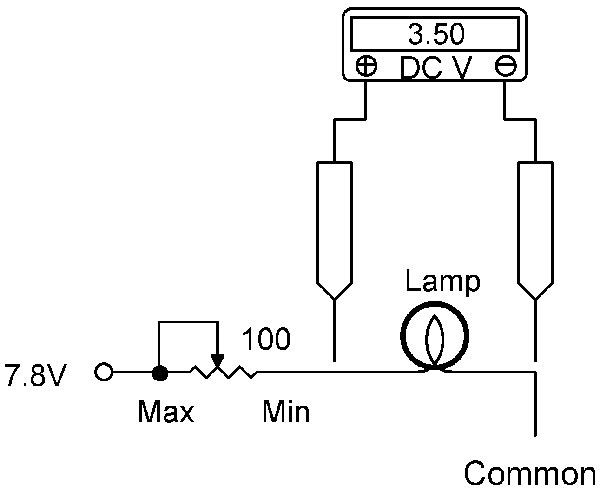 Set the pot to maximum resistance and adjust it down until the voltage across the lamp reads 3.5 volts. Remove the pot and measure its resistance. That's the value of the fixed resistor you want. Don't worry if the resistance falls between standard values. Simply use a fixed resistor with a value that's close enough. For example, if the potentiometer's resistance is 66 ohms, use a 68-ohm 1/4-watt fixed resistor.

If you have room for them, I'd put two Christmas lamps in series, instead of using the voltage-dropping resistor. Instead of dissipating the power as heat alone, it becomes added light.