Music Of The Spheres

I’m trying to build a VLF receiver to listen to whistlers and other natural radio sounds, but I’m having a problem. Instead of hearing music of the universe, all I get is a loud hum from the local power lines. I built a simple LC filter using an audio transformer, but still the hum overwhelms the atmospheric sprites. What can I do?

Relatively few people know of the beautiful radio "music" produced naturally by several processes of nature, including lightning storms and aurora, aided by events occurring on the sun. The majority of natural radio (a term coined in the late ’80s by Michael Mideke) emissions occur in the very-low and extremely-low frequency (VLF/ELF) range — typically 100 Hz to 10 kHz.

The greatest nemesis to monitoring natural radio is electric AC power lines, which “bleed” strong 60-Hz radio waves into the air. The usual cure is to place the receiver well away from AC power lines, typically 1/2 mile or better. Unfortunately, this isn’t always possible, in which case a filter may be your only solution. Here are two. 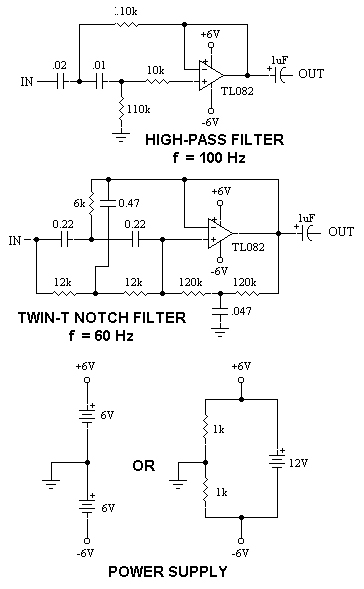 The top circuit is an active high-pass filter with a cut-off frequency of 100 Hz. That means it attenuates all frequencies below 100 Hz by about 40 dB and passes without loss those above 100 Hz, thereby eliminating the 60-Hz interference. The second circuit is a notch filter, which — unlike the high-pass filter — selectively removes just the 60-Hz hum and lets the frequencies above and below pass unscathed. BTW, if you’re using an e-field receiver — the kind with a short whip antenna — it needs to be located away from trees, buildings, and other obstacles by about 100 feet because these objects absorb VLF frequencies; the separation will also reduce AC line interference, making the filters even more effective.