I recently had to make a circuit to subtract two DC voltages. I first considered using a differential op-amp with one voltage feeding the positive input and the other connected to the negative input. After doing the math to balance out the four resistors for the gain I wanted, it struck me that a summing amp has an advantage: only one feedback resistor has to be changed to alter the gain!

I used an inverting op-amp for one input and fed it to a summing amplifier and ended up with the right number (below). What are the ramifications between the differential amp and my solution to produce the difference of two voltages?

Operational amplifiers (op-amps) are so named because they were originally used to model the basic mathematical operations of add, subtract, multiply, integrate, etc. in electronic analog computers. The figure shows how the op-amp is configured to “calculate” a few popular math functions. 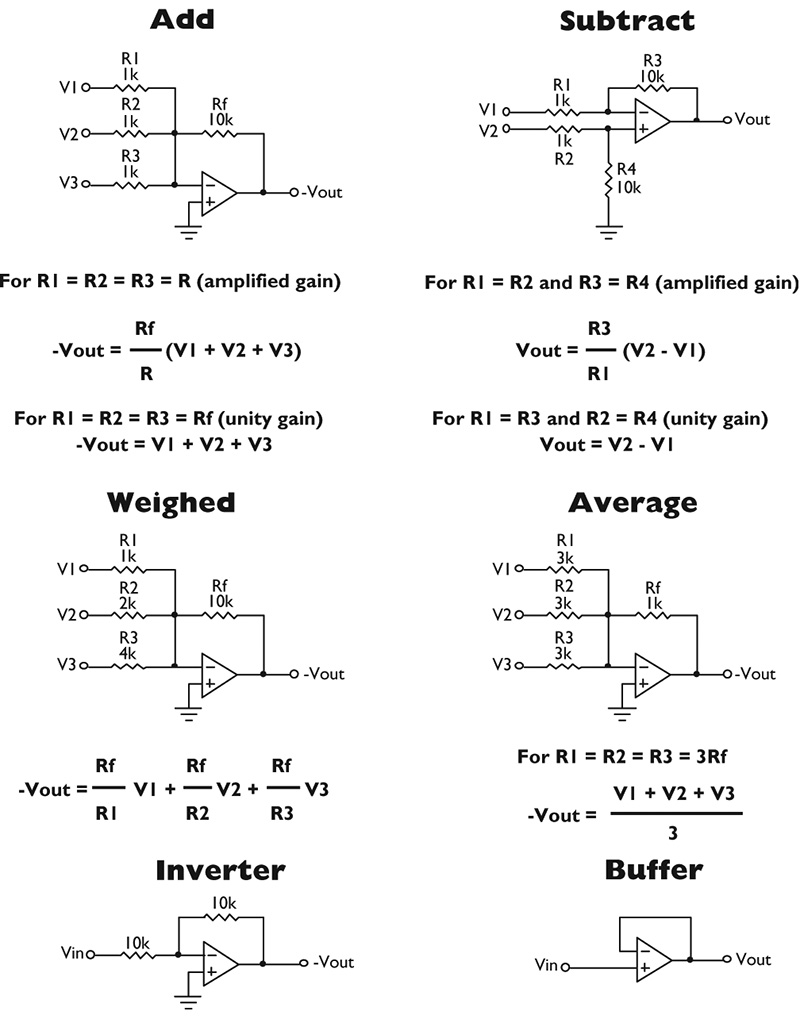 In the Add circuit, each voltage is weighed equally and there is no limit (well, almost) to the number of inputs you can deal with. Notice that only one resistor (Rf) is needed to define the gain of the circuit and the output is inverted. The Subtract circuit measures the difference between V1 and V2 by using the inverting and non-inverting inputs of the op-amp. It’s limited to just two voltages. With the values shown, both of these circuits provide a gain of 10x.

The Weighed and Average circuits are special cases of the Add circuit. The gain of the Weighed circuit is 17.5 for the values shown and the Average circuit has unity gain. In the Inverting configuration, both resistors have to be the same value.

What are the ramifications? Obviously, your inverting design allows you to mix both addition and subtraction with multiple inputs, something a single op-amp can’t do. Also, a single resistor determines the gain of the stage. On the other hand, each op-amp in the chain adds its share of noise to the output, which could be a factor in very low voltage measurements.