I am in the process of building a solar water heating system and need plans for an adjustable comparator circuit to control a circulating pump. When the upper limit temperature is reached, the pump will start and when the lower level temperature is reached, the pump will shut down. To make the circuit usable in a number of different applications, it would be helpful if the high and low set points were adjustable. Not being in the electronics field, I could use as much detail on the individual components as possible.

If you want a quick and relatively cheap solution, Thermo Technologies (410-997-0778; www.thermotechs.com) makes a microcontroller-based temperature controller specifically designed for solar water heating systems. But I know you want to build it yourself! So here you are. 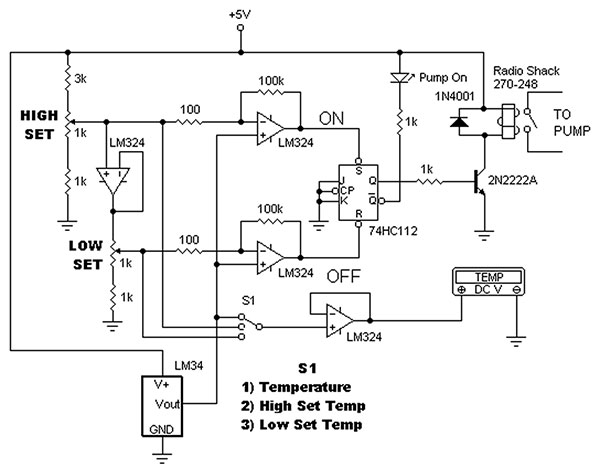 The sensor is an LM34 — a precision temperature sensor with a linear output of 10mV per degree Fahrenheit. At 100 degrees, the LM34 outputs a voltage of 1.000, which can be displayed directly on a DVM with no calibration. This voltage is fed to a pair of LM324 op-amps operating as comparators. The High set point is determined by the upper comparator and the Low set point by the lower comparator.

To prevent the set points from crossing over each other (where the Low set point is higher than the High), an LM324 buffer amp is used to set the range of Low set which, in this configuration, can never exceed High set — only equal it. To provide the necessary temperature differential, the output of the comparators controls an RS flip-flip, which can only trigger on the transition of the comparator outputs, not their absolute state. The output of the flip-flop, in turn, drives a pump relay and "Pump On" LED indicator.

Because the output voltage of the LM34 sensor is directly proportional to the temperature, calibration is done using a DVM or DMM set to the two-volt range. A three-position rotary switch selects the DVM to read the current temperature, and the High and Low set points. You can make the DVM a permanent part of the controller using a panel voltmeter, like the Jameco #108388 (800-831-4242; www.jameco.com). In fact, all components (including a suitable relay substitute) can be purchased from Jameco.