I have hearing aids that have three modes — including something called Telecoil. The manual says it is for answering the telephone. But, it also said it can be used in places that have an “induction loop” system, like in churches, theaters, etc. I was wondering if it is possible to make and install an induction loop in a house, like the TV room, for radios and other devices?

The Telecoil was introduced way back in the 1940s to assist persons with hearing difficulties. The design is based on the concept of magnetic induction — the same forces used in transformers. And like a transformer, the Telecoil has a primary and a secondary winding. Originally, the earpiece in the telephone headset served as the primary of the transformer and a small iron-core coil connected to a hearing aid was the receiver. This way, the disabled person could converse on the phone without ever hearing the audio sound. The hearing aid converted the electromagnetic waves into audio via the Telecoil. Unfortunately, modern phones (with a few exceptions) no longer emit electromagnetic waves strong enough for Telecoil operation. 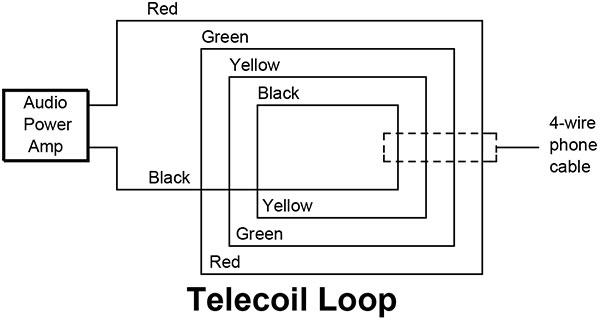 Today, Telecoil is mostly used for area reception — inside a church, for example. For area use, the primary winding consists of a thin wire or coil placed around the perimeter of the room or under the rug (depending on the area of interest). The diagram shows how to make a Telecoil loop that goes around the baseboard of an 8’-by-10’ room — as in a TV room — using plain old four-wire phone cable. The wires are spliced together near the amplifier using the color code indicated. This forms a four-turn coil with an inductance of about 384 mH. At 1 kHz, this translates to an impedance of 2.4 ohms. The loop connects to the four-ohm output of a 10W audio power amplifier with a volume control. You need this much power and control over the signal emitted by the primary coil because you will find drop-out spots as your Telecoil hearing aid moves about the room, and you need the volume control to prevent overdriving the loop that leads to distortion. You can also make Telecoil loops that serve just a Lazy-Boy recliner, a bed, or even under the seat of a car. Just make sure the coil’s impedance more-or-less matches the output impedance of the audio amp.