I have a 240 volt, single-phase generator that sporadically browns-out with one of the 120 volt legs dropping to 85 volts. My oscilloscope shows some glitches in the output on that leg, and they get larger with increased load. This is a brushless type generator with rotating diodes on the armature. There is an electronic voltage regulator that changes a field voltage to control output, but it only senses one of the 120 volt legs. I suspect that one of the diodes is bad, but when I tested them with an ohmmeter, they passed okay.

Semiconductors are strange devices in that they don't wear out like vacuum tubes or mechanical parts. Their failure is generally catastrophic — either they are dead or alive. However, semiconductor characteristics can change with age. In diodes, the aging process usually manifests itself in the form of increased leakage current. This situation (increased leakage) is exacerbated by higher temperatures, like those found inside heavily-loaded generators. Testing with an ohmmeter won't reveal this flaw.

A better way to gauge diode performance is with a curve tracer, shown below. 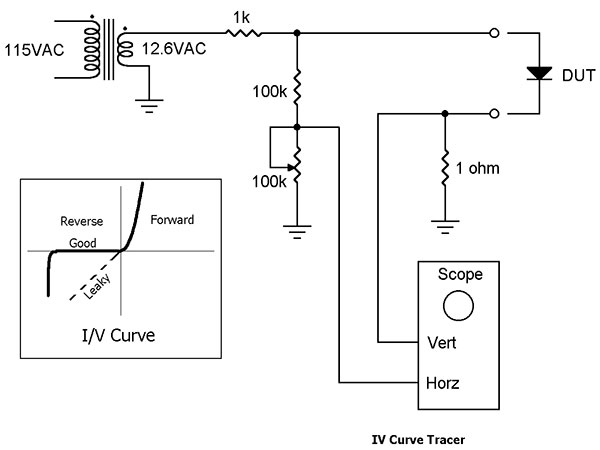 This circuit plots the voltage and current on the screen of an oscilloscope as the voltage across the Device Under Test (DUT) changes amplitude and polarity. The diode should begin forward conductance at about one volt. When the reverse voltage exceeds the breakdown voltage of the diode junction, the diode goes into the avalanche mode (zener region) and begins conducting. With your high-voltage diodes, though, this test will never place the diode in the zener region unless it's really on its last leg. It will, however, tell you if there's excessive leakage because the reverse curve will sag.

Don't have an oscilloscope? Reverse leakage current can be measured using a microammeter in series with a power supply, as shown here.

The HI/LO switch selects the test voltage. In the LO position, the voltage across the diode is less than 50 volts; in the HI position, it's less than 200 volts. A good diode will have less than 0.1 mA leakage. Anything above that is suspect.