What you want is a trapezoidal waveform generator. This can be done using a digital pot (Figure 1). The first gate — a 4093 astable oscillator — clocks pulses into a 128-step digital potentiometer. Two SPST (single-pole, single-throw) switches determine the direction of counting, up or down, and the output voltage, +5 volts or +10 volts. Since you have three unused 4093 gates, they can be used to drive LEDs to indicate the direction of the waveform, output voltage range, and other functions. The power supply is regulated to five volts, giving the output a range of zero to five volts; the ramp-up and ramp-down time is determined by the equation t = RC x 128. The op-amp increases the five-volt wiper voltage to 10 volts at about 25 mA, which should be enough for most applications. 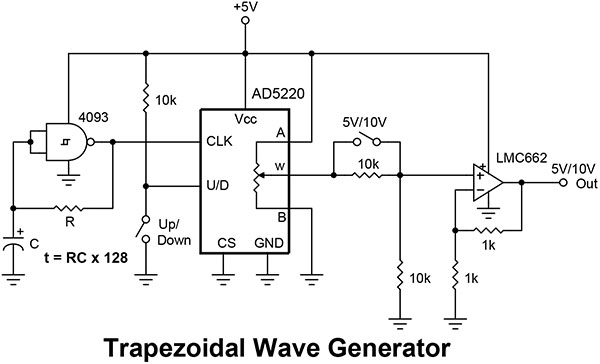 But you said you need 100 mA of drive. This is easily done by paralleling two or more op-amps to increase the output current. When paralleling op-amps, though, you have to be careful that they don’t feed back on each other and create unstability or overheating. The standard solution is to use small isolation resistors feeding a common line, as shown in Figure 2. There is no limit to the number of op-amps you can add to the right. However, it is better if they are all the same number — or at least the same type. Mixing parallel op-amp types is just asking for problems. 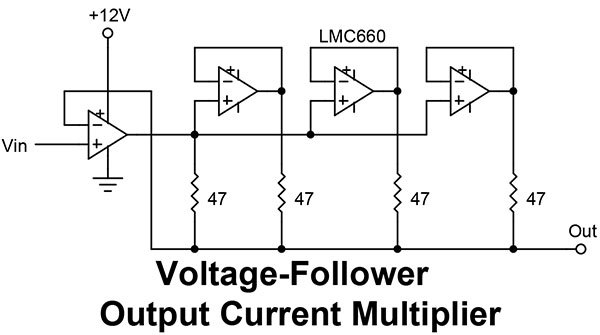