BEDROOM DOOR ALARM: One idea was to use it as an open door alarm on the children’s bedroom door, so privacy can be had in the adult’s bedroom. This could save some embarrassing moments and prevent having to explain the birds and the bees.

This adaptation is a simple one. Tie terminals one and two to ground. This will cause the receiver to always display green on these inputs. Using a 44-cent magnetic reed switch e.g., mouser 876-ORD228VL-1015 or a Digi-Key HE557-ND and a magnet makes the mounting simple. Solder two wires on the reed switch and cut off the remaining leads. If the receiver is within 200 ft of the transmitter, it won’t make any difference if the antenna is up, down or sideways. Using Velcro or double backed tape, you can mount the transmitter to the door jam or to the door. Mount the unit on the same door edge as the doorknob. Any magnet will work as long as it is close to the reed switch. Radio Shack sells many styles. These can also be mounted with double backed tape. Once the magnet is fixed to the door, adjust the reed switch so that it is near it. Screw one wire to the ground terminal and the other to terminal three. 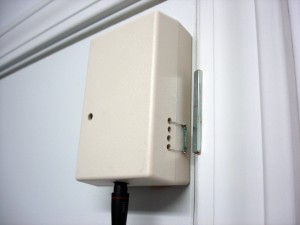 HORSE GATE ALARM: Another suggestion was its use on a horse gate. If it were to be used outside, I would waterproof it using silicon glue around the antenna and putting a strip of electrical tape around the box. Alternatively, you can simply put it in a plastic bag. Don’t mount in a metal box, as it will prevent the antenna from sending, as it will act as a Faraday Shield. I would use a sealed proximity detector such as Digi-Key CH405-ND that sells for about $4.50. This proximity detector is water and dust proof. 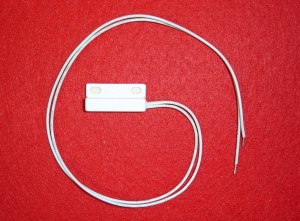 Tie terminals one and two to ground. Put the wires from ground to terminal three. Fold to the side of the box and seal it with silicon glue or tape. If it is away from the house, make sure the antenna is in the same plane as the receiver antenna. Make sure you seal the speaker hole.

YOU’VE GOT MAIL: The third idea is novel as it detects if the mail carrier has opened the mailbox. You will need to modify the receiver software for this application. The assembly file is on the Nuts and Volts website. If you don’t have a programmer, you can purchase the preprogrammed chip from the Nuts and Volts Webstore.

The mailbox should be the type that has a door that blocks light. This can be the standard breadbox or the newer multi mailbox units that are used in new subdivisions. The activating switch is a transistor that will conduct when the light hits the detector. This is assuming that you have daytime delivery of mail. The transmitter is mounted using Velcro tape on the inside of the door with the antenna mounted in the same plane as the receiver antenna. When the mail carrier opens the door, the unit transmits to the receiver, which latches the alarm and changes from red to green. The alarm and the led are reset by pressing the reset button. Either don’t mount the tilt switch or cut the trace marked on the board “Cut Here”. You won’t have to fool with terminals two or three as I have taken care of this in the receiver software. Take the phototransistor (Mouser 638-PT204-6C) and mark the long end with a sharpie and cut it even with the short. Place the marked end (emitter) through the hole in the box into the ground terminal and the other lead through its hole into terminal one. Using a hemostat or long nose pliers, bend the phototransistor at a right angle so it faces the top of the box. Mount the transmitter in the mailbox. 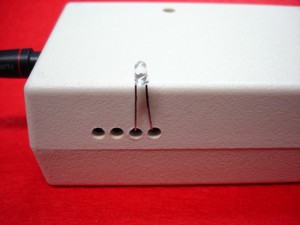 Make sure the reset button is pushed in to activate the alarm. When the light strikes the phototransistor, the alarm should activate. To deactivate the alarm push the reset button so that it is out. Once you have picked up the mail, push the reset button in. I have modified the software so that the two outside LEDs will be green when armed and red when disarmed. The center LED will be red if mail carrier has not been there and green if the mailbox has been opened. Consider using a 5-volt battery eliminator for the power supply as the alarm will be much louder. (e.g., Digikey T977-P6P-ND)