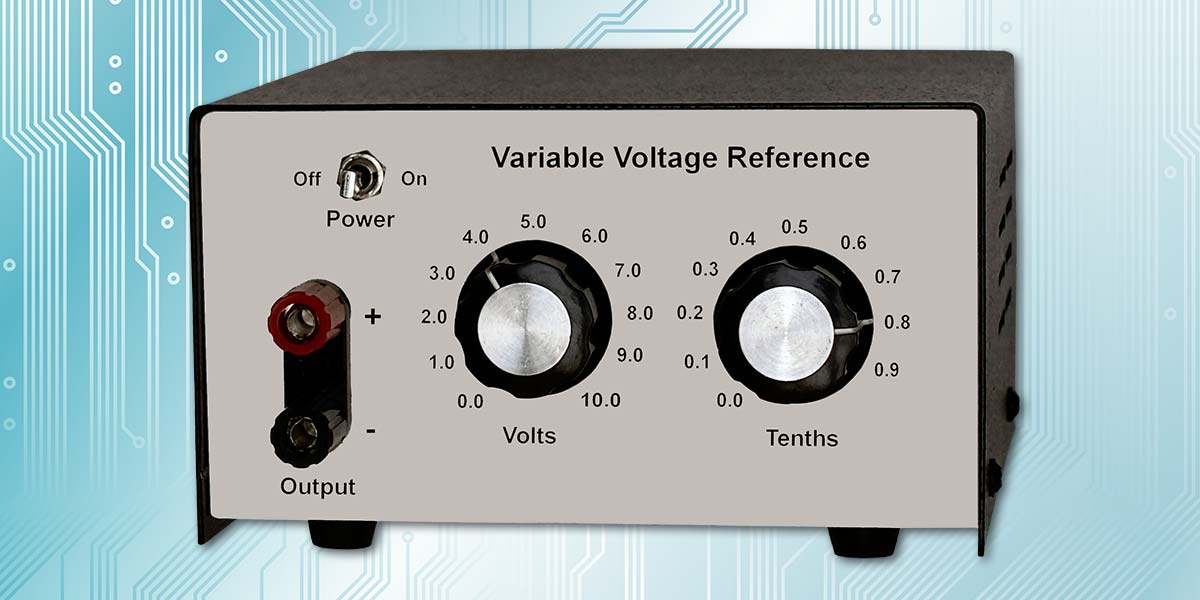 The downside to a voltage reference is that it only generates a single voltage and has limited current output. I decided to design a circuit that could generate any voltage between zero volts and 10 volts in 0.1 volt increments; for example, 4.8 volts with a basic accuracy of 10 millivolts and an output current of 100 milliamps (or one ampere with a power booster; see the TI OPA551 datasheet).

To achieve this accuracy requires analysis and mitigation of all possible sources of voltage errors. This will be discussed in the following sections.

Figure 1 is a block diagram of my variable voltage reference (VVR). 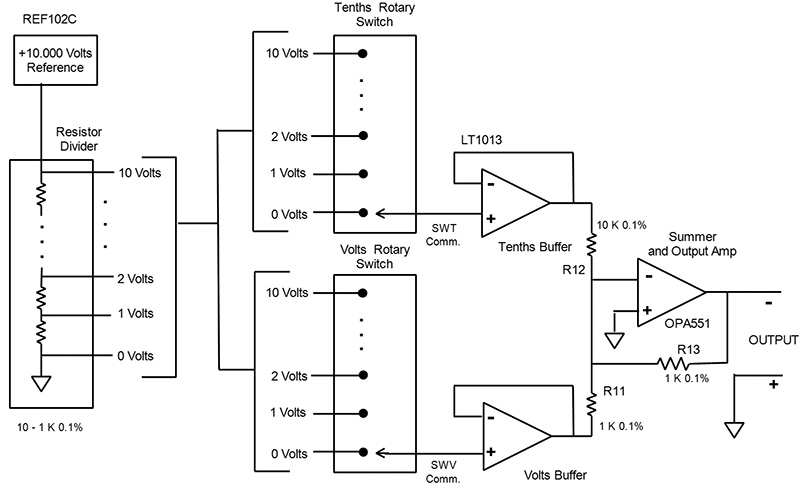 Starting at the left is the 10 volt REF102C which has an error of ±2.5 millivolts. This is within the 10 millivolt design goal. A 10 resistor ladder network (a voltage divider) breaks down the 10 volts into 10 integer volts as shown. This network is the first (and largest at about 10 millivolts) source of voltage error since the resistors are only 0.1%. I’ll address this later.

Next in the block diagram are the two front panel rotary switches: one for volts and the other for tenths of volts. It may seem strange that both switches are wired the same since the tenths switch works in tenth volt increments, but I’ll explain how this works shortly as well.

It’s very important that the resistor network not be loaded down by its following circuits, so I have a dual low input offset op-amp (LT1013) wired as a unity gain, very high impedance buffer. It has about one millivolt input offset to contribute to the error.

Now comes the fun part. The OPA551 is a very nice op-amp with a 200 milliamp output and a typical input offset of one millivolt. It also functions well as a summing amplifier.

Another source of error is how the circuitry is assembled. I used a solderless plug-in breadboard for the initial testing and the results were bad. The wire leads on the resistors are thinner than the wire normally used (22 AWG) and they don’t make reliable contact, so I would see variations in the output by just touching one of the ladder resistors or tapping on the breadboard.

So, I went with an SB404 solderable breadboard and that completely solved the problem. This breadboard is very convenient and it may be possible to thicken the resistor leads by applying a thin coating of solder.

I bought 25 1,000 ohm resistors for 52 cents each from Digi-Key intending to select 10 resistors having close to the same value for the ladder. You also need two matched resistors for R11 and R13.

Now comes the challenge: how to measure each of the 25 resistors to better than .1%. A typical 3-1/2 digit handheld meter won’t do it; all resistors would read as 1,000 ohms! A 4-1/2 digit meter or better yet a 5-1/2 digit meter is required if we use this direct measurement method.

I used an alternate technique for measuring resistance called a Wheatstone Bridge method, with three 1,000 ohm 0.1% resistors from the batch of 25 and a +15 volts power source. The voltage measured by the bridge is quite small (low millivolts) but the two 3-1/2 digit meters I own read voltages as low as 0.1 millivolts.

A Wheatstone bridge is a simple circuit for measuring an unknown resistance by connecting it, so as to form a quadrilateral with three known resistances and applying a voltage between a pair of opposite corners. 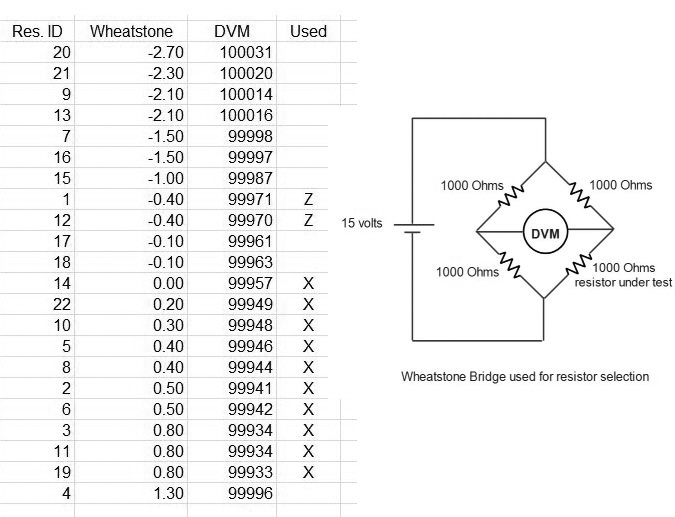 The Xs in the fourth column are the best candidates for the resistor ladder and the Zs are perfect for R11 and R13.

Figures 3 and 4 are the detailed schematics for the VVR principal circuits. They just add detail to the block diagram. 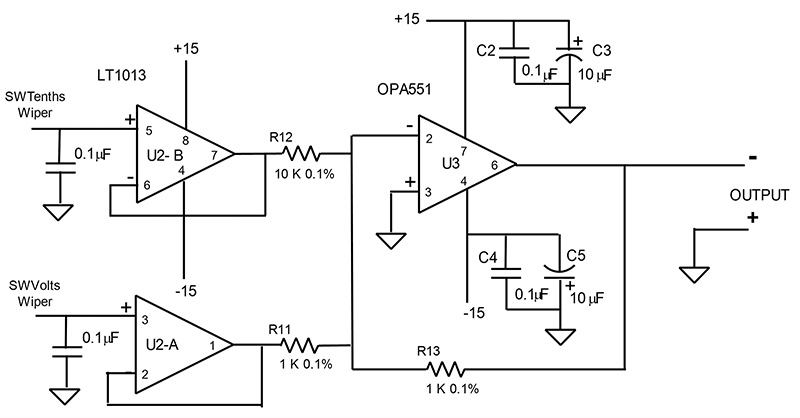 The VVR operates from ±15 volts at about 100 milliamps. It can be supplied in several ways; for example, AC/DC converters using normal house power for the AC. These are low priced and available with dual outputs of ±15 volts.

I get a little nervous about having 120 volts AC floating around in a metal box that I will come in contact with, so I looked at alternatives and found a great one: the Traco Power TEL 3-0523 (Digi-Key, $16). This is a DC/DC converter with 4.5V to 9V input and dual outputs of +15V and -15V at 100 milliamps each. The input and output are isolated from each other and it can be powered with a cell phone charger.

Unfortunately, these chargers typically use a USB to micro-USB cable. I couldn’t find a suitable panel mounted micro-USB jack, so I just changed the cable from a USB to a type M barrel cable. Or, you can just cut off the micro-USB connector and run the open end through a grommet and hard-wire it to the power supply.

I had to cut back the VVR output current to 80 milliamps because the OPA551 uses 20 milliamps internally.

Figure 5 is the assembly diagram for the principal components of the VVR. As I mentioned earlier, I prefer a soldered assembly for best accuracy and stability. I used the SB404 board for this project, but if you prefer a solderless assembly, then the assembly drawing shown in Figure 5 can be squeezed by two columns for the standard 30 column solderless breadboard. 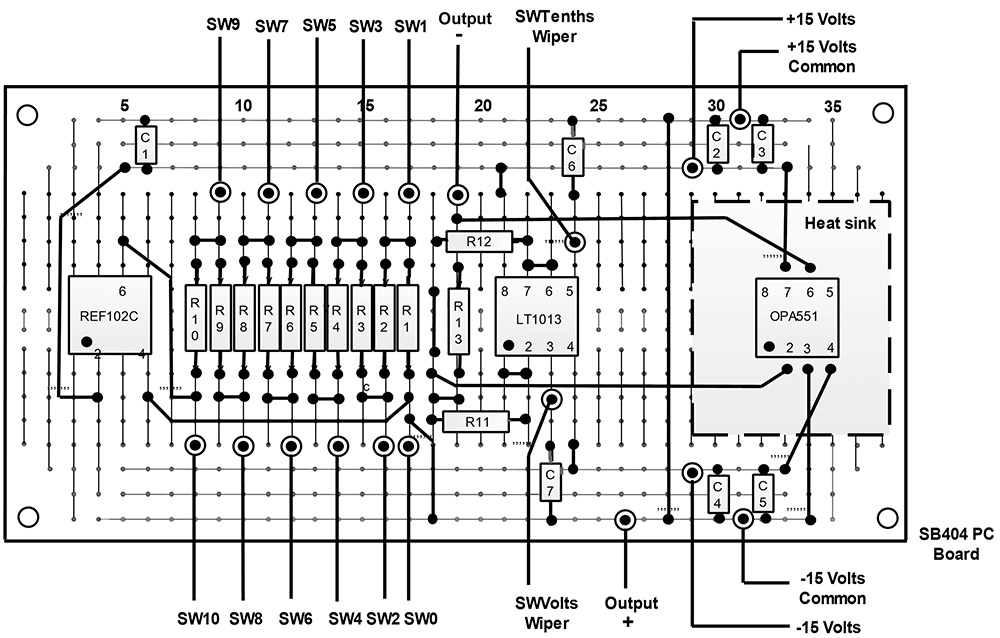 The worst-case power dissipation of the OPA551 in the VVR is about one watt which mandates a heatsink. I used thermal glue to bond a heatsink to the OPA551.

Figure 6 shows the actual VVR output at various volts and tenths switch settings. The VVR performance far exceeds my expectations! I think the accuracy of the ladder network is the main contributor at an additional cost of less than $7. 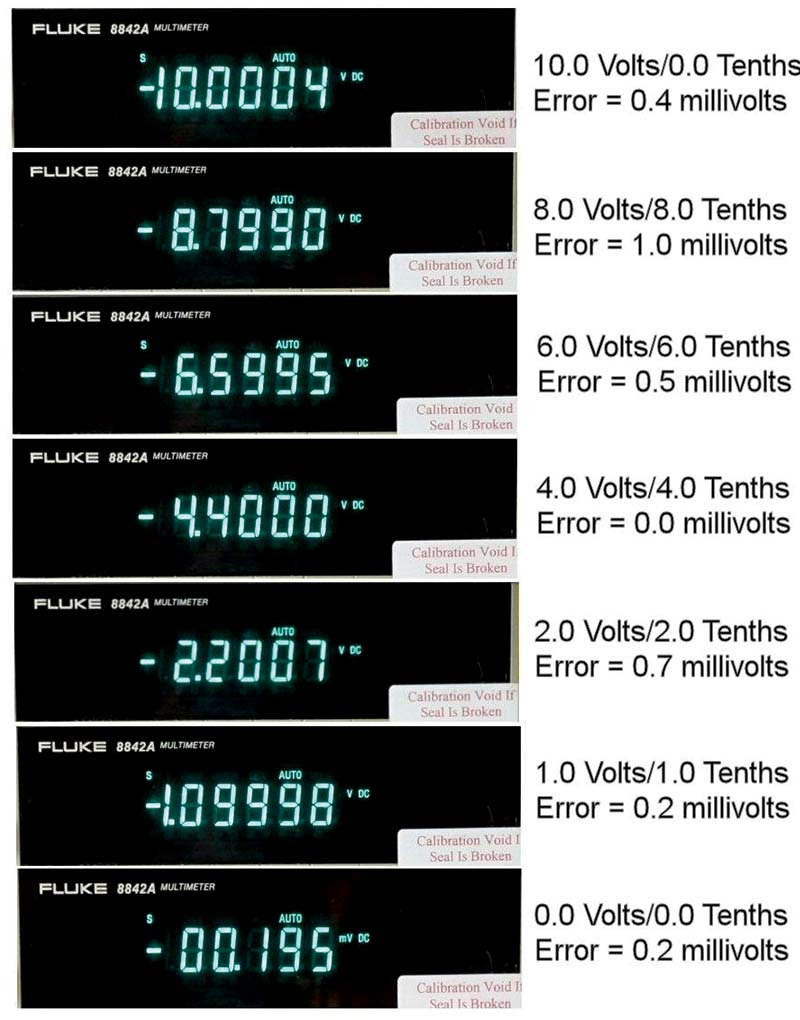 In addition, the output voltage with 0.0 volts/0.0 tenths is only 0.2 millivolts. This means that the sum of the input offsets of the LT1013 and the OPA551 is close to zero.

The VVR is expected to be used in a hobbyist workshop environment. However, it’s still important to evaluate what variations in performance to expect with changes in the environmental temperature.

Since there are 10 resistors in the ladder, we get 10 times 0.025 or 0.25 millivolts per one degree change in temperature. This seems like a lot but remember that all the resistors are subjected to the same temperature and will mostly experience the same change. The ratio of the resistors to one another doesn’t change much, and that’s what is really important.

The LT1013 input offset is a maximum of one millivolt over the full range of temperatures (-55°C to +125°C). It has a typical offset of 0.2 millivolts at room temperature.

The OPA551 has a typical input offset of one millivolt at room temperature and a maximum of five millivolts over the full range of temperatures (-55°C to +125°C).

What is the maximum error? It’s difficult to determine, but I think that based on my test unit results shown in Figure 6 (I didn’t do any component screening except for the resistors), your error should be less than three millivolts; probably less than two millivolts over ±20 degrees from normal room temperature.

Putting It to Work

An obvious first use for the voltage reference is to calibrate your digital and analog voltmeters. Set the variable voltage source to a value within the range selected on the DMM/VOM and adjust the voltage reading accordingly.