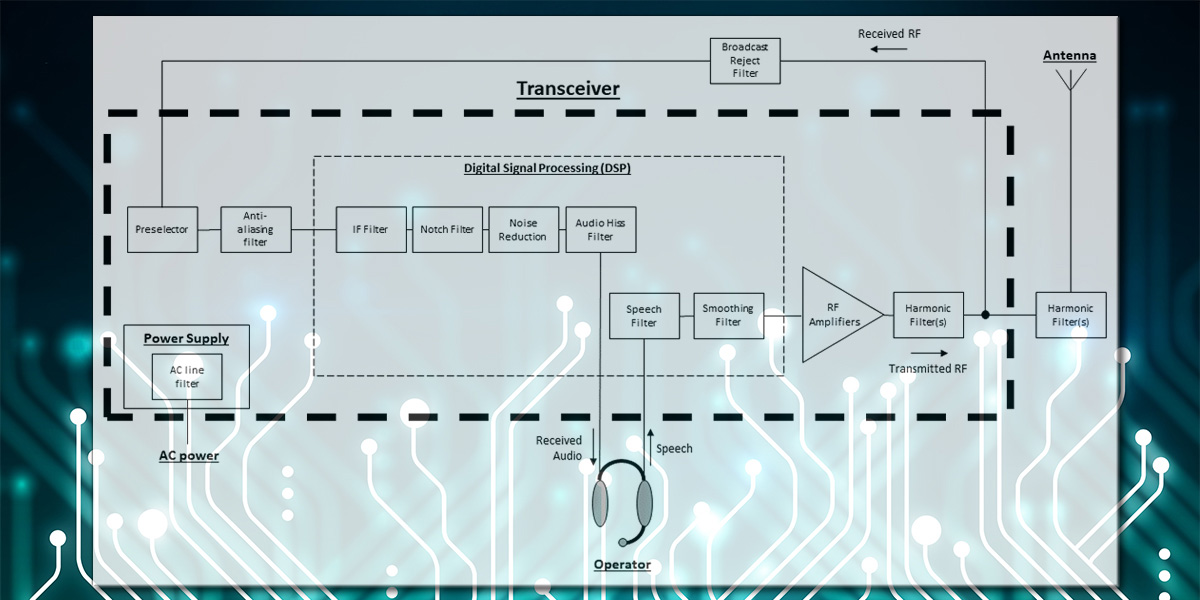 A casual observer might think that wireless systems consist primarily of filters connected by the occasional bit of circuit! Block diagrams of transceivers often include as many filters as any other function. This is true at the system level, just as it is at the circuit level — and many circuits behave in a filter-like way, whether intended to be a filter or not! That makes understanding filter basics important for wireless success.

What is a Filter?

Looking up “filter” generates a lot of entries! Along with the electrical definitions, there are adaptive filters and image filters and so forth, as well. The general idea, though, is to operate on an input signal (or data) so that the output is modified based on some pre-defined quality of the input signal. With respect to electrical signals, a filter is a circuit or function with an effect that varies with the input signal’s frequency, wavelength, or phase. All three of those characteristics are basically the same thing: a regular variation in time.

As with just about everything else in ham radio, filters can be analog or digital. The common passive (unpowered) analog filter consists of familiar inductor-capacitor (LC) or resistor-capacitor (RC) circuits. If some kind of amplifier is used, the circuit becomes an active filter. Most active filters use op-amps in a variety of feedback circuits. Figure 1 shows an example of each type of filter circuit. 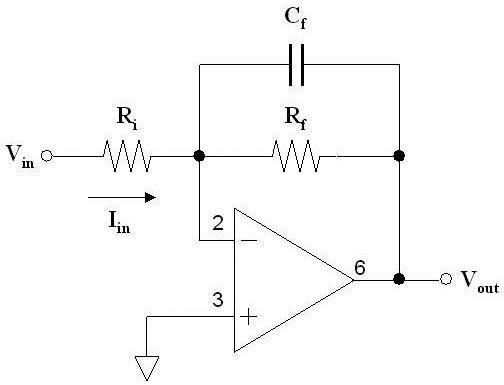 A digital filter requires analog signals to be digitized, creating a stream of digital data representing the original signal. Once digitized, any mathematical operation can be performed on the data. If the result is to be viewed or listened to by a human, the digital data is converted back to an analog signal. Processing and converter electronics are now inexpensive enough to implement that digital filters (and many other signal-processing functions) are taking over from analog in ham radio. This article will stick with the traditional analog circuits, but the general definitions and specifications for how the filter behaves apply to all filters.

Nearly all electrical filters (assume we are talking about electrical filters from this point on) are described and specified by their effect on the amplitude or magnitude of signals having different frequencies. (The phase response is also important in many applications.) This is the filter’s frequency response and because it describes signal amplitude, it is a magnitude response. Several types of responses are shown in Figure 2. Filters also have a phase response that describes the phase relationship between the input and output signals. (There is also a time-domain response such as you would see on an oscilloscope screen.) 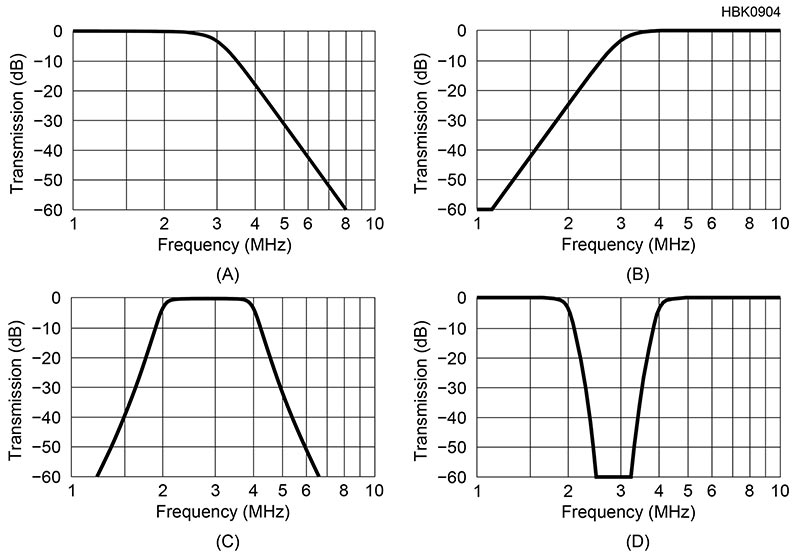 Figures 2A and 2B show the high-pass and low-pass responses. Figure 2C is a band-pass response and Figure 2D is a band-stop or notch response. Each response has a pass-band (where signals aren’t attenuated) and a stop-band where signals are rejected. All have many uses in radio, mostly in attenuating unwanted signals. We’ll discuss some of these uses later in the article.

Before using or selecting filters, you’ll have to know how they are specified. Beyond just the broad high- or low-pass type, you’ll have to be able to give specific frequencies and specific levels of attenuation. Each of these parameters has a name and precise definition. Figure 3 shows a high-pass filter’s magnitude response. 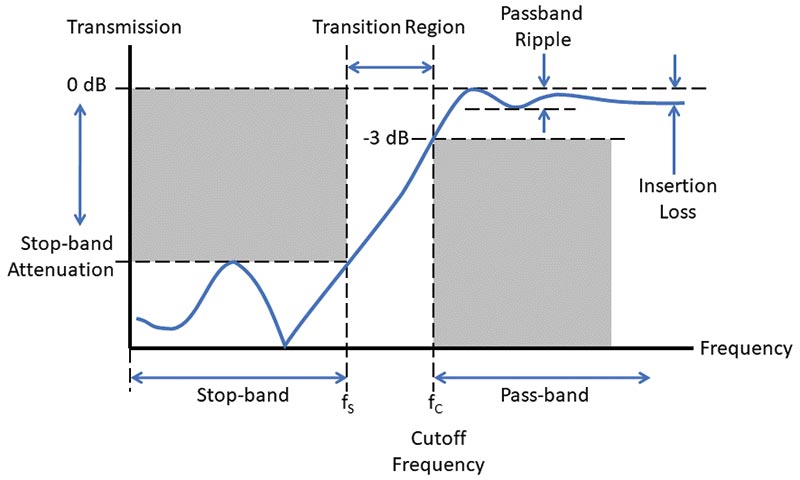 Drawing the gray boxes on a response graph establishes the filter’s basic behavior.

Attenuation — Is it Positive or Negative?

If an output signal is smaller than the input signal, the ratio in dB will be negative. For example, if the output is five times less powerful than the input to a filter, that is a power ratio of -7 dB with the minus sign indicating a ratio less than 1. That represents an attenuation or loss of 7 dB, with no minus sign.

The minus sign isn’t used if the name of the parameter implies whether it is present or not.

Looking through websites and books of filter designs, you’ll notice that along with the type of frequency response, there are other categories: Butterworth, Chebyshev, Bessel, Elliptical, and more. These are known as filter families. Many of the families are named for the designer who worked out the equations describing them. (Elliptical filters are so-named because the solutions to functions describing them form an ellipse in Cartesian coordinates.) Each set of equations has different solutions that translate into different component values.

Each family of filters has a different frequency response shape. They might all be designed to have the same cutoff frequency but the amount of ripple in the pass- and stop-bands and the steepness of the rolloff vary quite a bit. (The filter’s phase responses are also quite different.)

For example, compare the Chebyshev and Butterworth low-pass filter response curves in Figure 4. Both are low-pass filters with a cutoff frequency of 1,000 Hz. The curves have very different shapes, though. The Butterworth has a very smooth response with no ripple at all — Butterworth filters are often referred to as maximally-flat for that reason — but the rolloff is smooth and gradual, as well. The Chebyshev filter trades a smooth response for steeper rolloff by allowing various amounts of ripple. The filter response in Figure 4 is known as a “1 dB ripple Chebyshev.” 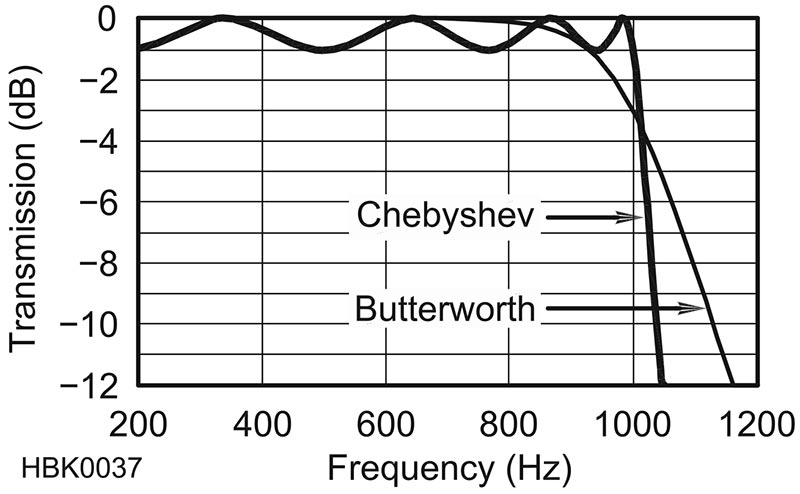 FIGURE 4. Filter responses for a Butterworth and a Chebyshev low-pass filter. Both have the same cutoff frequency of 1,000 Hz but have significant differences in rolloff and ripple in the passband. (Figure courtesy of the American Radio Relay League.)

Depending on what you’re using the filter for, ripple or gradual rolloff might be okay. The different filter families offer choices about how the filter will perform and what effects they have on the signals. For example, hams trying to design an audio filter for receiving the single tones of Morse code (CW) find that a lot of ripple means distortion and smearing of the carefully shaped dits and dahs. At high speeds, that can make the code “tough copy.” In that case, it’s worth allowing a more gradual rolloff so you hear some of the adjacent signals in order for the Morse elements to be reproduced clearly. Each application is a little bit different in what is important.

The filter responses in Figure 2 vary smoothly between the pass-band and the stop-band. This is the way a real filter behaves. Nevertheless, you will encounter references to “ideal” or “brick-wall” filters for which the pass-band and stop-band responses are completely uniform or “flat.” The transition region for such a filter is a vertical line on the response graph with an infinite rolloff. Needless to say, these filters can’t actually be built, although some sophisticated digital filters get close.

Once a filter family is selected, the next order of business is to determine how many “sections” of filtering are needed to meet the performance requirement. The number of sections is the filter’s order — the higher the order, the more filtering is applied to the input signal. Order describes the number of LC or RC pairs in a passive filter, such as in Figure 1A which is a fifth-order filter. Figure 5 shows the effect of cascading three filter sections of Figure 1B’s active RC low-pass filter. You can see the rolloff of the filter increasing as order is increased. 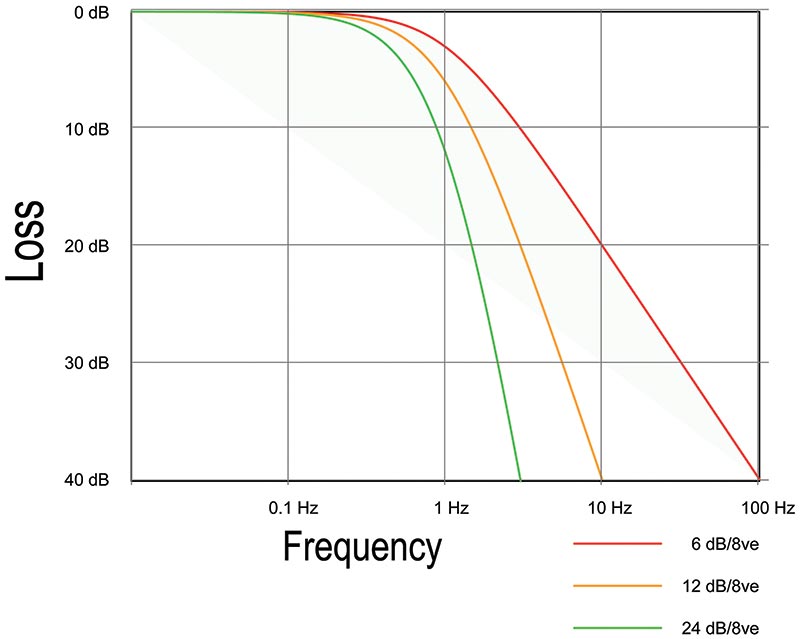 FIGURE 5. The effect of increasing a simple RC filter’s order from 1 to 3. Note the increasing steepness of the filter’s rolloff at higher orders. (Graphic courtesy of Spinningspark at Wikipedia, CC BY-SA 3.0, https://en.wikipedia.org/w/index.php?curid=23488139.)

In general, as order increases, performance can more closely approach the ideal filter’s response. However, filter complexity is increased, tuning is more critical, and component variation and losses can have a more pronounced effect on performance. We’ll cover order in more detail next time.

Let’s discuss a few applications for filters. Figure 6 is a block diagram showing where these filters are found in typical ham radio transceivers and accessories. 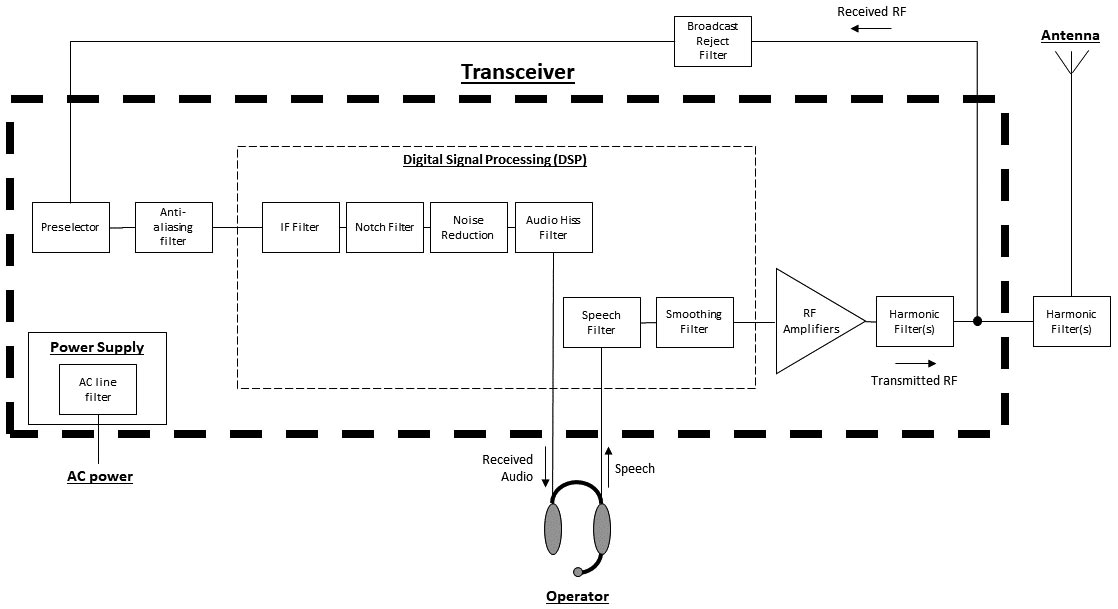 FIGURE 6. A transceiver block diagram showing typical applications of filters for different functions. Filters are used at frequencies from AC power through the transmitted and received RF signals.

Signal-processing filters are more and more likely to be performed by software (DSP), but there are still many analog filter circuits in radio.

Many books have “canned” filter designs for various common applications.  If you are careful to use the same type of component and circuit layout, you’ll probably get acceptable results. Beginners should start with pre-designed filters.  As you progress, you’ll be presented with the need to “roll your own” filter.  Along with the Tonne Software programs we’ll be using in the next article, there are some tried-and-true resources for the experimenter.  For serious readers, the various editions of Arthur Williams’ Filter Design Handbook are widely available as used copies.

If you’re looking for more of a “plug and chug” solution, the venerable Active Filter Cookbook by Don Lancaster in its various printings will provide design formulas and examples for filters in the audio range. Finally, for RF filters, the ARRL Handbook’s chapter on Analog and Digital Filtering provides theory and projects through the microwave range with a long list of references and additional supplemental information online.

Do Filters Have to Be Circuits?

Analog filters with Ls, Cs, and Rs are very common but they aren’t the only electronics that can perform filtering functions. Indeed, there are no perfect circuits for which frequency doesn’t matter, so technically, every circuit is a filter! However, there are a few notable non-LCR filters you should be aware of:

Why are Analog Filters Still Necessary?

While you’ll find digital filters taking over more and more filtering chores, analog filters are still the only practical choice for many roles. Obviously, at high power levels — such as for transmitters and duplexers — low-loss inductors (L) and capacitors (C) are required. The selection of appropriate components is an art in itself for these circuits.

Less obviously, analog filters are also required at very low signal levels where a digital circuit may not have enough resolution in bits to represent the signal, and at very high frequencies where the samples can’t be taken fast enough. Digital filters also require a fair amount of supporting electronics and might be too expensive.

Analog filters will be with us for quite a while!

In this article, I’ve presented some filter basics to give you a better understanding of how filters behave and are specified.  It wouldn’t be very nice to leave you hanging without some practice, however. So, in the next article, we’ll experiment with a very capable suite of filter design software.

ELSIE (a play on “LC”) is provided by Tonne Software (Jim Tonne W4ENE is a long-time contributor to the ARRL Handbook and other ham radio endeavors), along with several filter design utilities.

You’ll find that filters are well within your ability to design and build!  NV