In our last episode, we finished up with C pointers (whew!) and we built a chaser light marquee frame using the Simple Chaser Lights kit available from Nuts & Volts. Now it's time to study a C topic related to pointers: arrays. As a reward for our patience with the theory, we will build another project using the chaser lights kit: a POV (Persistence Of Vision) wand.

As before, this Workshop is split between some C theory and a tangentially related (but more fun) lab exercise that uses LEDs. We are nearing the end of the C theory, and soon will just use it and refer back to these articles when we show the C code. So, save your back issues! They might come in handy some day when you need a refresher on some arcane C concept.

Figure 1 shows the chaser lights board tied down on a stick and swung madly about in a dark room where you can just see NUTS & VOLTS spelled out in the air. 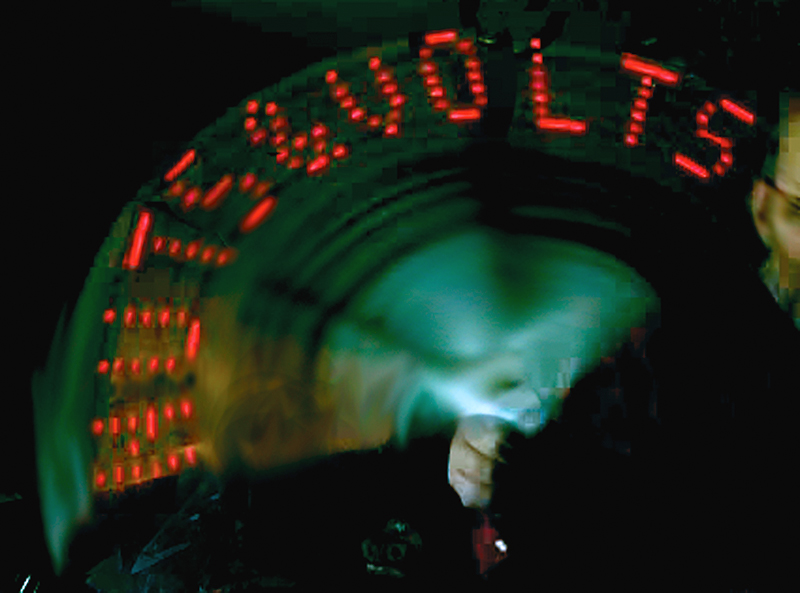 In this episode's lab section, we will look at some of the principles behind the phenomenon of POV and will build the actual thing in the next.

Last time, you probably got good and sick of hearing about pointers. I hope that you also got how they work, because they are critical to serious use of the C programming language. After all that, we are now going to look at arrays that do many of the same things you’d do with pointers, but are a lot easier to understand. You might wonder why we didn’t look at arrays first if they are easier. The reason is that you’d tend to skim over pointers if you learned arrays first. You’d think, ‘Oh I can do that with arrays, no need to learn pointers!’ Well, not exactly. Pointers and arrays are very closely related but not identical, and you will run into pointers a lot in C, so best learn them now rather than when your boss is standing over you with a whip.

Arrays
An array is a C data type that represents a sequence of memory locations. Think about that for a moment. Memory is where data is located and each of these locations has an address beginning at 0 and increasing all the way to the end of memory (okay, there are exceptions but they are not relevant here). When you create an array of size x, C will assign x contiguous locations in memory to that array. Say, for instance, you create ‘char myArray[10]’ — the C compilation process will find 10 contiguous locations in memory that are not in use. It will then assign the address of the first location to the 0 element of the array.

Let’s look at a simple program to illustrate this. The following code is for an AVR, but now would be a good time for you to test your knowledge and port this to Pelles C like we used last time. You’d eliminate the usart.h include and calls to the usart. The code should then output the data shown to the Console Program Output rather than Bray’s Terminal:

Multi-dimensional Arrays as Function Parameters
You can have arrays of arrays, known as multi-dimensional arrays. For instance, you might have a two dimensional array where one dimension is the alphabet and the other is the graphic data to show a given character. So, for instance, alpha[3][5] might represent the third character ‘d’ and have five bytes associated with it to show it on a 5 x 7 LED matrix. In avrtoolbox, you’ll find font_5x7 which uses a two dimensional array to store the characters for the ASCII codes from 0x20 (space) to 0x73 (~). Since only 95 characters need to be used at 5 x 7 say, five bytes per ... that’s 475 bytes. Not a lot. That can be stored in program memory as shown:

[a bunch of data left out to save space]

We use this data to map out the lighted LEDs that give a specific character. For example, the character ‘X’ is:

When we look at this in binary and character graphics, we see:

If you want to test this with Pelles C, you can copy the font array from the font_5x7 file in avrtool box and append it to the following code, which will generate the pattern shown in Figure 2. 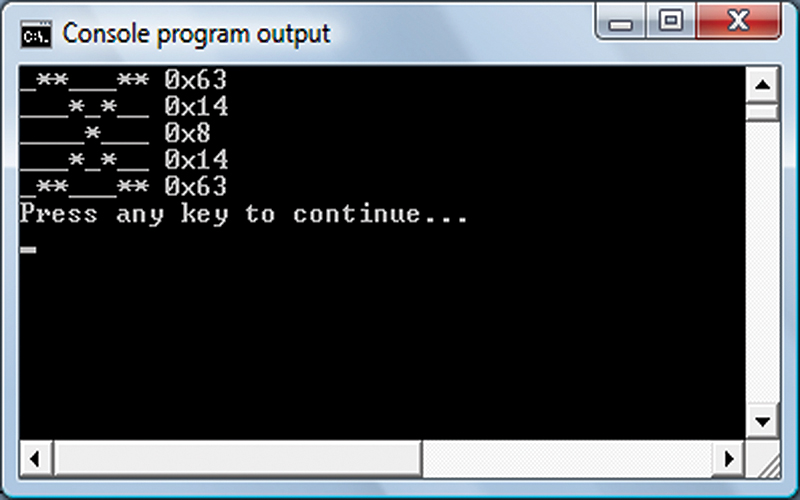 Well, I went way too long on the C theory, so I’ll have to short-change things a bit in the lab. We’ll just look at the POV concept and delay the details on how to convert the simple chaser lights board until next time.

Persistence of Vision
Persistence of vision is the retention of an image in the eye for about 1/25th of a second after the visual stimulus has been removed. POV accounts for us seeing movies as showing real motion when they actually only show still images at a rate of 24 frames per second. [Modern movies and televisions are a little more complex than this, but no need for the details here.]

The Thaumatrope Magic Disk
The thaumatrope is a spinning disk toy that was popular in the 19th century. If you saw the movie Sleepy Hollow, you may remember the scene in Figure 4 where Ichabod dreams about his mother showing him a cardinal in a cage using a thaumatrope. 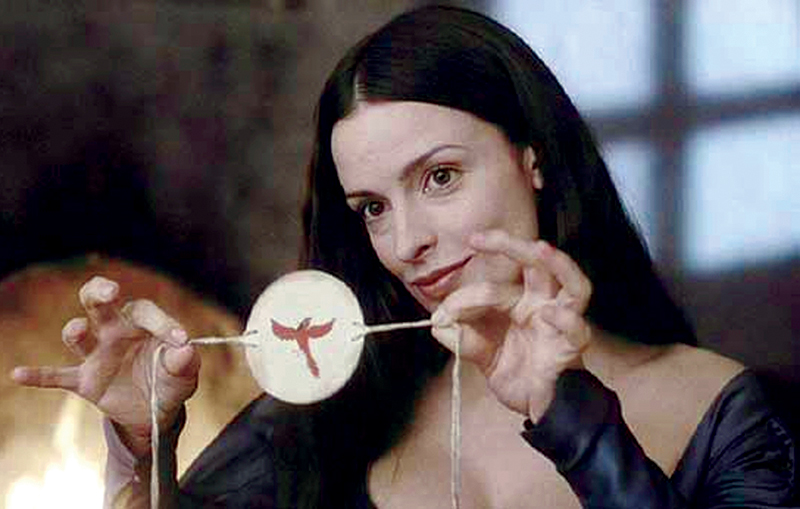 Ichabod shows Katrina the disk and they have the following dialog:

KATRINA — You can do magic! Teach me!
ICHABOD — It is no magic. It is optics.

Oh, what a stick in the mud! Of course it is magic. You can build your own by copying Figure 5 and gluing it to a disk and attaching some string as shown in Figure 4. Just twirl away and impress three year olds everywhere. 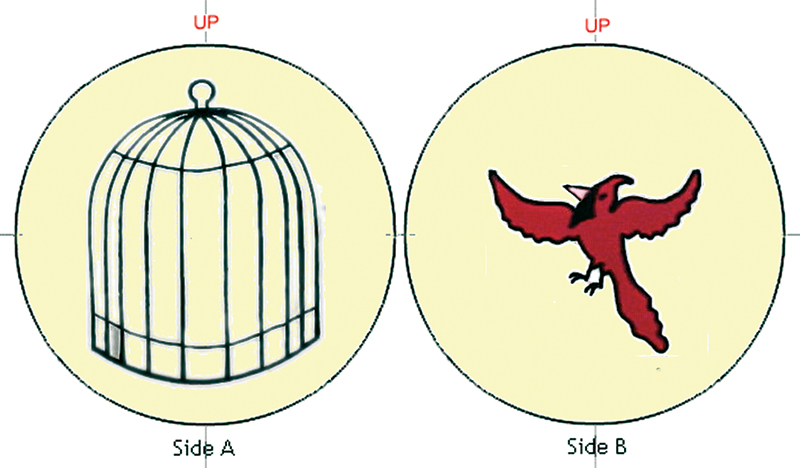 NOTE: if you build the thaumatrope, be sure and have the bird and cage upside down relative to each other when you glue them front to back so that when the disc is spun, you will see the bird upright in the cage. This little project is kind of fun to do with kids, especially when you tell them about POV and how this was seen as a sort of magic long ago. 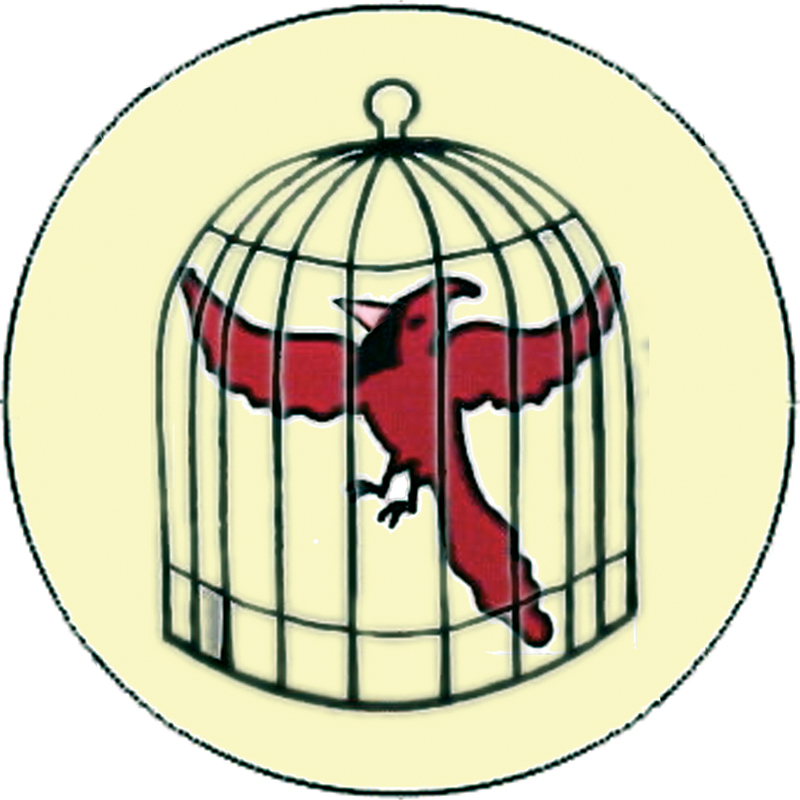 NUTS & VOLTS Out of Thin Air!

The simple chaser lights board shown in Figure 7 has several POV messages programmed into it that can be selected using the leftmost five switch positions as follows:

When I attacked the problem of making an LED POV wand, it attacked back. At first, I built one of those hand waving wands that you sweep back and forth to display a message, and I quickly found that this concept doesn’t work as well as I thought. First off, if you are displaying the message to others, then you are standing behind the wand and have no way of knowing how the message looks other than to stand in front of a mirror. Doing so lets you get an idea about how fast you need to wave the wand and lets you change the waving so that the message starts at the beginning of a sweep and finishes at the end of the sweep. Having a mirror available is a bit of a stupid requirement. So, I decided that instead of all the hand waving, I’d just attach the chaser lights to a board with a handle on it and swing it in a circle. The results shown in Figure 1 are with me slinging with my right hand and trying to take a picture with my left. (It took a lot of pictures to get one that had all the text in the frame.) The slinging technique requires less finesse in your timing, though you will want to practice in front of a mirror to get an idea of how fast to swing it.

Then, there is that problem that you might get the timing right, but the message will be showing at the bottom of the swing and appearing upside down. I built the device shown in Figure 1 by cutting out a two foot length of Styrofoam, fastened the chaser lights board and battery box to it with a rubber band, and then jammed a pencil in one end for a handle to swing it with. No need to show it since it looks as bad as it sounds.

Okay, I get it now — the reason POV wands aren’t more popular is that they require you to be in the dark, standing in front of a mirror to make them work right. (Some lessons can only be learned by building something and after seeing it in action, realize that it was a stupid idea.) Yeah, sounded great on paper, but the reality is somewhat less than great. Technically, you could mount the chaser lights board on a motor and set the timing like one of those propeller clocks, and it would work just fine. You could also use an accelerometer and have software that senses direction change and speed. Who knows, I might decide one day that is a good project. So, let’s declare that this whole POV wand was a great experiment and we learned a lot. Let’s just move on to the next thing and hope not to embarrass ourselves again.  NV

Theory is all well and good, but to really learn this stuff you have to get your hands on some tangible items that blink, whirr, and sometimes detonate. As a service for the readers of the Smiley’s Workshop articles, we have simple and inexpensive projects kits available that can help you make it real. You can find these kits (and some darn good books) at the Nuts & Volts Webstore.

Nuts & Volts now carries the entire line of Smiley Micros books and kits. Some are shown in the magazine and others in the web shop. If you just can't wait and want to get a leg up on real C programming for the AVR, then get the C Programming book and Butterfly projects kit, or if you are a complete novice try The Arduino Workshop and projects kit.