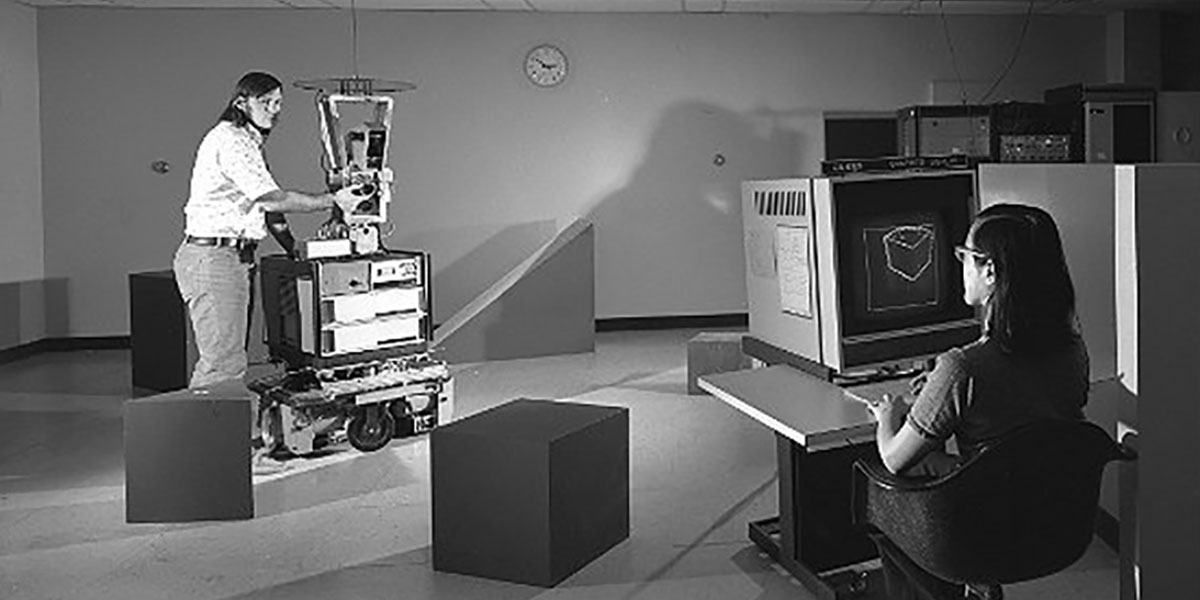 Readers of Nuts & Volts and especially SERVO — our sister publication — know first hand the remarkable strides that robotics has made in the last 10 years or so.

Yet, as one developer told me, robotics in the first decade of the 21st century are still very much akin to where personal computers were in the mid-1970s. Just as it took decades of experimentation and research to get to the first microcomputer, it has taken robots an equally long gestation period to get to the hobbyist level.

In the 1960s, it required enormous sums of capital just to research robots. There were essentially two groups doing research into robotics: one corporate and the other using government money. Dr. Joseph Engelberger was developing the first robots for automobile assembly lines — technology eagerly purchased by General Motors and, later, by other automobile manufacturers.

Meanwhile, Stanford Research Institute (later known as SRI) — located in Menlo Park, CA — was working with ARPA, the Advanced Research Projects Agency, the central research and development organization for the US government’s Department of Defense. (Later, it became officially known as DARPA. The added D stands for Defense. In the late 1960s, it also gave the world Arpanet, the direct forerunner to today’s Internet.)

The result was a robot eventually known informally — but lovingly — as “Shakey” because of its herky-jerky motions. It became a milestone in robotics technology. As Dr. Richard J. Waldinger of SRI told me, its builders had several objectives for their robot. First, “it was combining wholly different elements in artificial intelligence into a single thing. It did have some English understanding, so you could type commands into Shakey in English and it would type back in English. And then there was vision because it could recognize objects — it had a TV camera so that it could see things and there was work on getting it to tell where the edge of the room was. It could recognize blocks. It could find ramps and other things like that.” 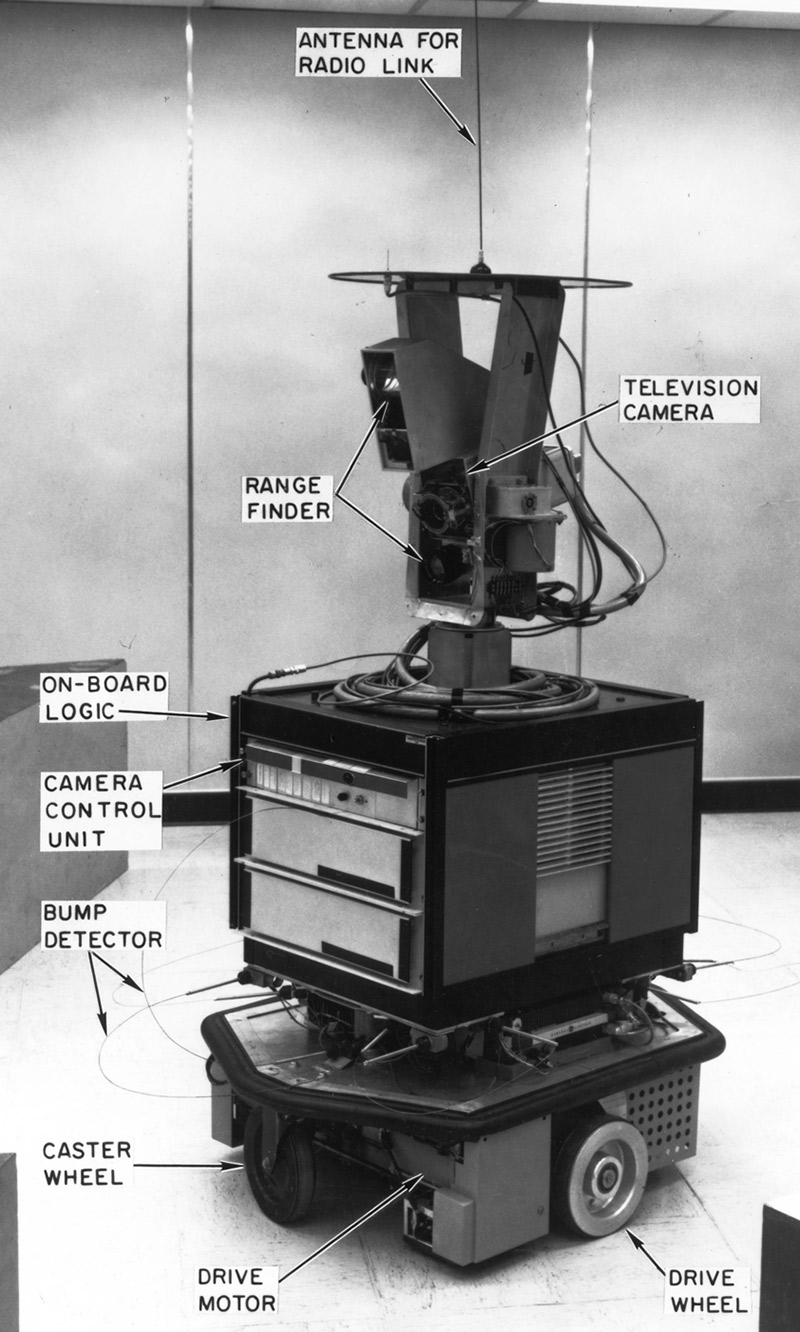 A mid-1960s photo from the Stanford Research Institute diagrams the key features of Shakey.

Beyond that, one of the goals of the Shakey program was to build a robot that could be given instructions that were less than step-by-step and still have it figure out how to accomplish its tasks. As Waldinger says, its instructions wouldn’t say “go here and then go there;” rather, they would say “move this box to this location.”

Shakey had no hands, but, as Waldinger says, “it could push boxes with its ‘stomach.’ It was like a bulldozer; it could push boxes along and the tasks that it could do had to do with moving a box from one place to another and, sometimes, there were things that it had to move out of the way in order to get through a doorway.

In some cases, there were uncertainties; it would think that a box was in place and then someone would secretly move it and it would have to adjust to contingencies that might have interrupted its plans. So, it was the first time that a whole bunch of different things were integrated into one system.”

The Birth of Shakey

The robot was initially created because Dr. Charles A. Rosen — who led SRI’s applied physics lab — had a remarkable idea in 1963. As his colleague, Dr. Nils J. Nilsson, wrote in a 1984 paper, “What would it be like, he wondered, to build a large learning machine whose inputs would come from television cameras and other sensors and whose outputs would drive effector motors to carry the machine purposefully through its environment?”

Rosen wrote a memo outlining his plans for such a robot or “automaton,” as he called it. Then, as Nilsson describes it, “During 1964, we spent a lot of time planning a robot research project and discussing the idea with possible sponsors. As interest in computer science and artificial intelligence grew, we were ready to concede that our robot ought to be equipped with heuristic computer programs, as well as pattern-recognizing learning machines.”

Their proposal eventually won funding from ARPA, which sent an informal request to SRI to bid on a research program to develop automatons.

Shakey wasn’t designed to be an aesthetic knockout — in fact, it was rather ungainly looking. It was several feet tall with a sort of head containing a TV camera and range finder, but that head was attached to a square body containing onboard logic and electronics, a camera control unit, a rubberized “bump detector” for when it came in contact with a wall or other object, and — underneath it all — drive and caster wheels. 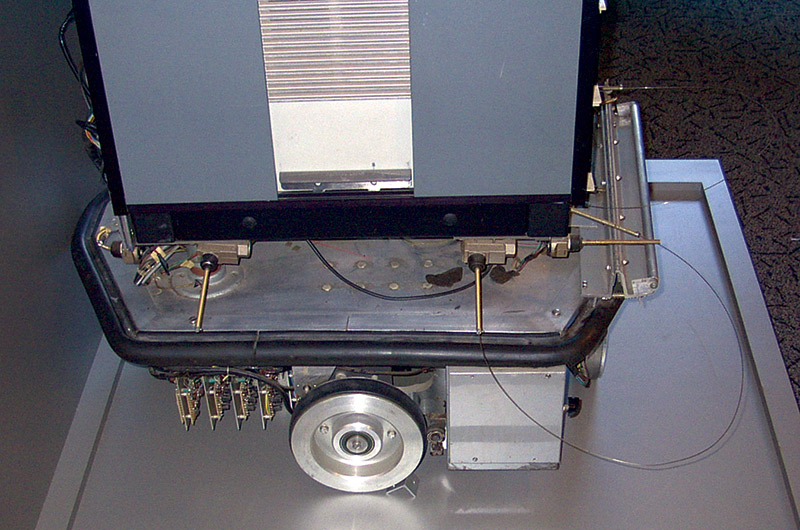 Shakey used loops of wires as "bump sensors," to alert him to when he was about to hit a wall or other obstacle.

Of course, as Dr. Waldinger notes, “There were no personal computers in those days and computers back then were bigger and heavier than you’d want to carry around.”

So, Shakey’s brains, “were in a larger computer and I think they changed computers from time to time as newer computers came along. 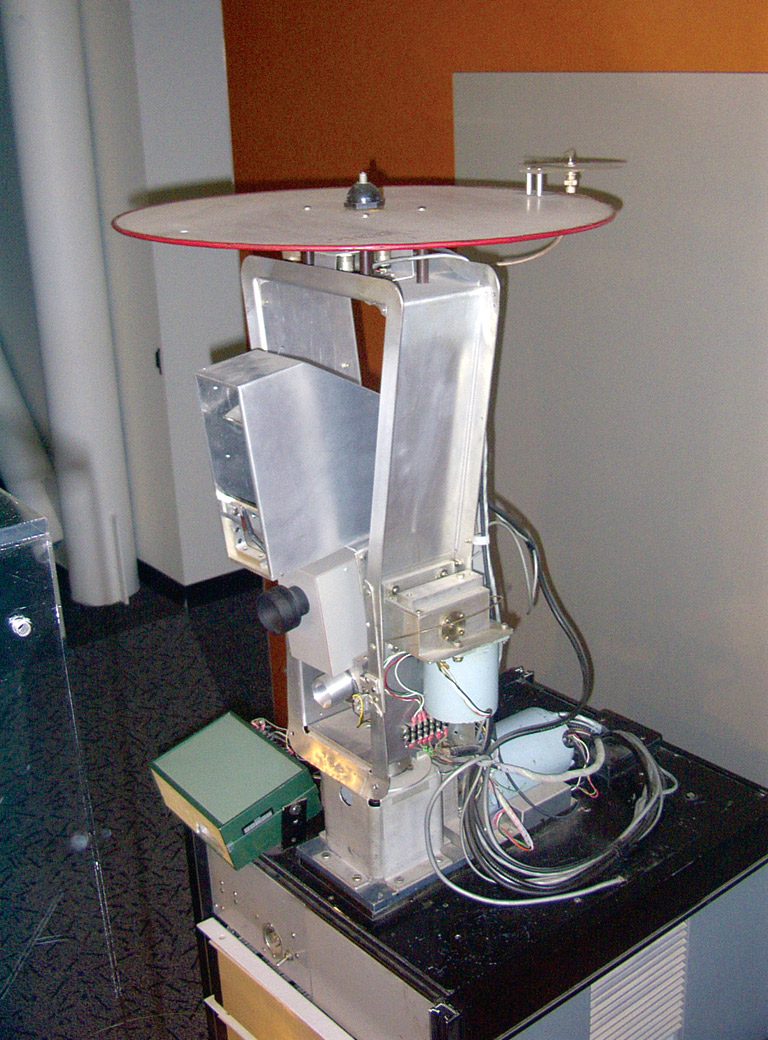 Shakey's head combined a television camera and a rangefinder. Unlike a human, his actual brains resided in computers that connected to Shakey via cables, and later, a wireless connection.

I think there was maybe an SDS940 and that might have been replaced by a DEC10. It may have had some things onboard, but not very much.” Shakey was connected to them first by cable, “and then, eventually, I think there was a radio link.”

Like many prototypes, Waldinger remembers Shakey as being “a very unreliable piece of equipment. First of all, it was very slow and, when it was moving something, it was not very long before something would go wrong.

For example, a lot of things done in the movies were pieced together — it didn’t do things all at once; it did a little bit and then it broke and then somebody had to fix it.”

SRI made a series of films of Shakey in action. Waldinger notes that, “in the first movie, there was a clock on the wall and you could see by looking at the clock how long things were taking. Actually, sometimes the clock would seem to move backward, because something had been done late one day and then was picked up the next day or maybe a couple of days later. So, in subsequent movies, they removed the clock from the wall.”

All technology has to begin somewhere and there’s a direct link between Shakey and the mobile robots of today. There may be other links as well: Waldinger remembers a presentation given to a group of high-ranking Army officials. One of them asked the men at SRI, “Could you attach a 36-inch blade to that thing?” The response was basically, “I don’t see why not!” That may have been the birth of Robot Wars, 30 years before its time.

Shakey has another amusing link to today’s technology. After DARPA terminated funding on Shakey in 1972, the robot sat in SRI’s lobby for several years before eventually ending up in the Computer History Museum in Mountain View, CA (see the July 2001 issue of Nuts & Volts). 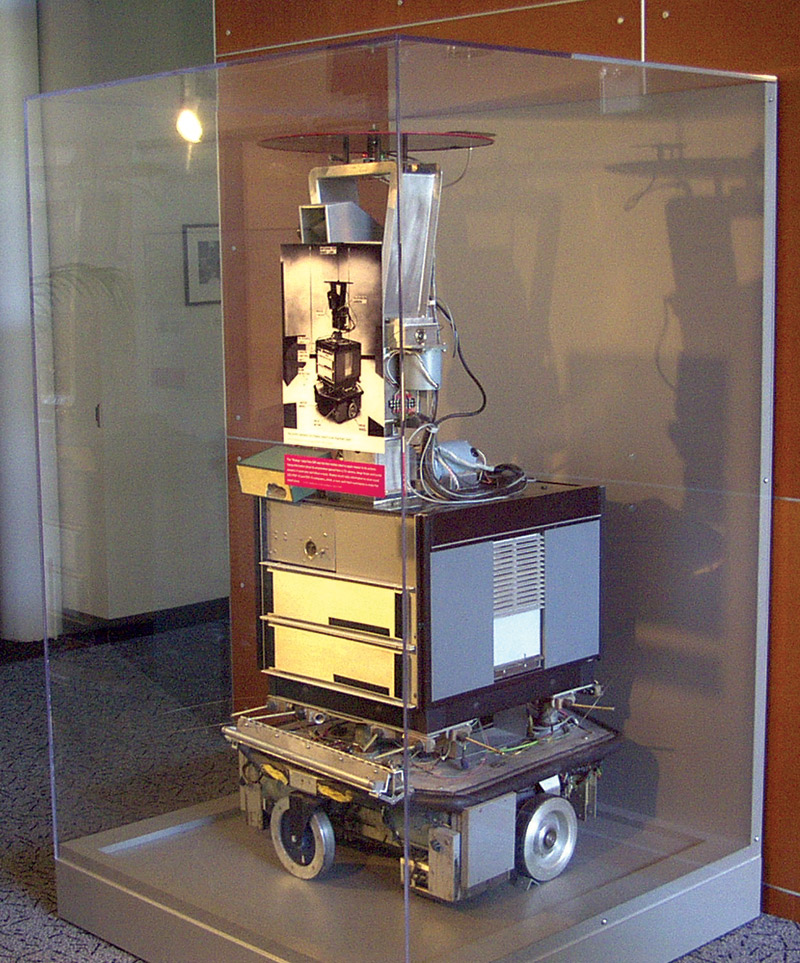 Shakey quietly resides in a Plexiglas case at the Computer History Museum in Mountain View, CA.

For a robot that had trouble seeing where it was going, Shakey’s legacy definitely went far.  NV