I really enjoyed Bryan Bergeron’s column in the recent 2020-6 issue. It really resonated with me and my wonderful career and hobby in electronics.

I do think there is a lost benefit to keeping simplicity in focus on any design. My career started in aerospace with the job of failure diagnosis and repair. The job really made me face the consequences of complexity.

At one point, my boss asked if I and another engineer would redesign an existing unit that had five circuit boards. My co-worker and I had both done FD and repair, knew the headache of fixing complexity, and managed to get the same functionality out of two boards and half the parts. A side benefit we didn’t expect was fewer failures over time after putting the unit in service.

A more recent effect in the market is knowing quickly what competitors products include for features and the pressure to add those features to existing products without really measuring their value.

I also think that is why there’s a nostalgic interest in tube or early electronic projects. You can joyfully wrap your brain in how it works.

Keep up the great articles in my favorite magazine.

Thanks for the thoughtful email. All excellent points. You’ve obviously been in the trenches for some time.

I read with interest Bryan Bergeron’s column, “Why the Complexity?” I have a good example of old-school simplicity.

My town built a new high school in 1967. I was the first freshman class to attend in the new building. I was one of those AV geeks, wandering the halls pushing carts with projectors and even black and white TVs and video tape recorders with half-inch reel tapes. We started a Ham Radio club. Because of my AV expertise I was “known” to the administration as a technical resource.

In my junior year, there was a big problem with the sound system. This was a typical 1960’s system with a nice metal desk console. It had high power amplifiers for each floor, programmable paging by zone, and an intercom to individual classrooms. It was my first exposure to the 6550 tube.

The big problem was that the tone generator died. There were no conventional bells that rang inside the building to announce class changes. Instead, an audio tone was broadcast through the sound system. The repair company said it was not repairable and had to order a new unit. Now, someone had to manually announce class changes by voice until the new tone generator arrived in a few weeks.

The principal called me to the office and asked me if I could look at the tone generator. He figured since it was already broken, how much worse could I make it? The tone generator was in a 19” 1U rack cabinet. It had an AC line cord, an RCA audio output, and a control input. I opened the cover and was shocked to see what was inside!

There was no circuit board. All that was in there was a power supply, a relay, and several passive components on terminal strips. When I saw the NE-2 neon bulb, I knew exactly what this was.

In my younger days, I saw a circuit to build an electronic coin-toss game. It used two NE-2 neon bulbs, two resistors, a capacitor, a switch, and a 90V battery. When powered up, the two bulbs flashed alternatingly. When the switch shorted the capacitor, only one bulb would remain lit. You never knew which one (heads or tails) would be lit when the switch was pressed. This was called a neon relaxation oscillator.

I took a trip to the electronics classroom. These were the days when Tech Ed was taught in high schools. I went into the back storeroom looking for an NE-2 lamp. The teacher said he had none. I noticed he had some panel mounted pilot light assemblies. Surely at least one of these would have an NE-2 inside. I broke one open and, sure enough, there was a neon bulb in there!

I removed the blackened bulb from the tone generator and soldered in the new one. I closed up the cabinet and re-mounted it into the rack. The principal made an announcement to ignore the tone and pushed the button. OoooWah. Out came the familiar triangle wave with the swooping attack pitch.

These relaxation oscillators produce triangle waves. The initial frequency rises a little as the bulb heats up.

The look on people’s faces in the office was priceless. The professionals couldn’t fix it and had to order a whole assembly. One of our kids fixed it with a 39 cent part he knew we already had in the school.

I haven’t worked on school PA systems since then, but I can imagine what the evolution of tone generators might be. The successor to the neon lamp would probably be a two transistor bi-stable multivibrator. In a few years, that would be changed to a 555 IC followed by 555 emulator software programmed into a PIC.

Today, that tone generator would probably be all surface-mount components run by an Arduino using digitally sampled tone chimes from historic European sites.

One thing’s for sure. Today’s tone generator could not be fixed by a 16 year old high school kid!

Very good Rick! The sad part of the story is that the typical 16 year old in the US today wouldn’t be able to fix that simple tone generator.

After reading Bryan Bergeron’s perspective regarding complexity, I wholeheartedly agreed with his challenge. Limiting functionality to the bare necessities would be practical with my own projects or tools, but not in commercial or industrial applications. Our competition would have a field day running circles around us with all the bloat they claim is necessary. Marketing has convinced everyone that the least common denominator is what everyone else has … plus a little more!

Complexity is really a function of many simple things combined to form a system. Many designers today use canned libraries for code, USB powered CPU boards, and LCD graphics to bring their ideas to life. Each of these tools are very complicated and knowing how they all work is immaterial. The end game is to make something complicated enough to keep your competition busy trying to catch up!

I’ll admit, there is a comfortable nostalgia to going back to tubes, transistors, or even eight-bit MCUs, but unfortunately, that’s really just entertainment. Our expectations today tend to be more complexity, not less. Makers today accomplish far more complexity than we could even imagine a few years ago.

The real question is, how far back toward simplicity would we be willing to go?

Great perspective on complexity. I agree with your assessment of commercial goods, to a point. Yes, you have to compete on feature sets. Why not have all those things for just one cent more?

For my personal possessions, I want simplicity. I want to understand what’s in my hands. Decades ago when I worked as a microwave technician, I remember the year that we all stopped repairing boards in the field. We just swapped out the board(s) and mailed them in to the factory. Too complex to repair the boards in the field. But then, why have all that training? I suppose that’s why there are so few technicians today focused on household appliances, TVs, etc.

I read Bryan Bergeron’s editorial on “Why the Complexity” in the 2020 Issue-6 and couldn’t agree more. I think that, in this age of super small processors, people tend to forget the basics. I’ve been in electronics for many years and still agree with the “kiss” principle. To me, a simple mechanical switch both does the job and is reliable. The added benefit is that you can see its status without power being on.

I tend to design circuits using “basics” and they not only function well, but can be easily fixed if something malfunctions.

Don’t get me wrong, I’m not a total dinosaur, and as such will occasionally yield to a software solution. However, I will opt for a transistor or basic IC instead of a circuit requiring three hundred lines of code.

I hear you, Frank. I like problems that I can correct or circumvent with a soldering iron.

After reading Bryan Bergeron’s article on Current Limiters, (Issue-6 2020), I took my old simple one off the walll in my garage.

I had an old Powerstat on the shelf; I purchased the meter and a box from Amazon. The Powerstat had no dial and they wanted $15 for a new one. I looked on their website and found a photo of one. I then scaled the photo to match mine and printed it on label paper, cut it out, and attached it to the front.

I added banana jacks for the output and two toggle switches from my junk box.

Here’s a photo of my completed unit. Thanks for the idea! I now have an updated tester. 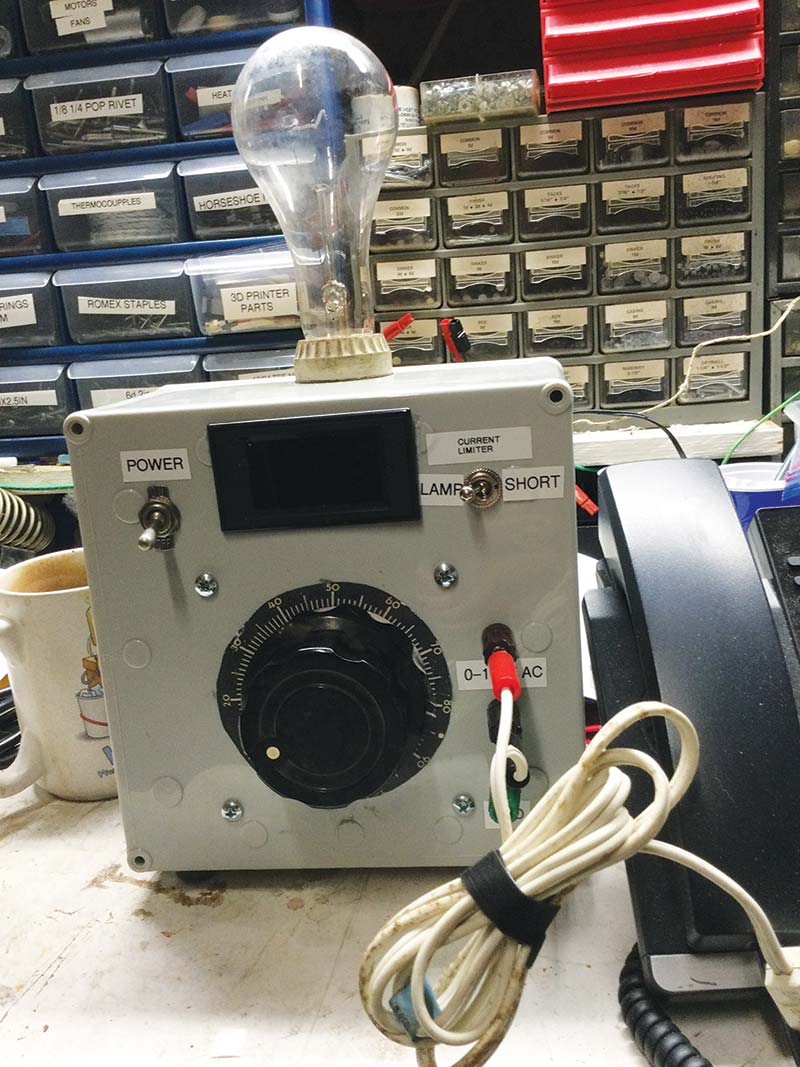 Nicely done, Don! Excellent job on the cutout. Thanks for sharing.

I’m a 75 year old retired man living in McLean, VA, who fell in love with tube radios recently, at the same time knowing nothing about electronics until three months ago when I purchased a broken Zenith Transoceanic T600 from eBay. Thanks to experts such as Bryan Bergeron, I started to read various articles on repair and restorations. I learned enough that I could replace all the capacitors and filters so that my Zenith came back to life.

A month ago, a good friend of mine gifted me a working Telefunken Jubilate 5161W identical to the one Bergeron wrote about. I found out that a few tubes and magic eye tube were weak, so I ordered the tubes and at the same time I searched the ‘net for restoration of Telefunken Radio till I reached his marvelous article.

I must admit, his step-by-step detailed explanation of repair and restoration of this beautiful radio inspired me to take care of my Telefunken Jubilate 5161W. While cleaning the chassis, I wrongly used Simple Green to remove the dust and goo from the transformator and choke. A few hours after finishing the cleaning, I replaced the weak tubes with good ones. I turned the radio on. It powered on, all the tubes lit on, and the radio started to work.

However, after a minute, I sensed an odor and smell like burnt wire; the fuse burnt and the radio stopped working.  I learned a big lesson: Never use liquid to clean the goo from sensitive electronic parts!

Now, I’m in need of finding a reliable great repairman for my Telefunken radio. I thought no one could help me, but perhaps Bergeron could recommend a reliable person that can fix what I tried to repair.

Any info is immensely appreciated.

Thanks for your note. I’m sorry that you discovered the hard way that any kind of liquid cleaning has to be followed by a period of drying. And also not to spray everything. That said, something else could have died without your cleaning.

I’m afraid I do all my own work and don’t know anyone that could help. However, I’ll post this in N&V. I’m sure someone will make themselves known to you.

And don’t give up (and maybe try a simpler radio to start)!