By Edward B. Driscoll, Jr.

In 1977, the Tandy Corporation (aka., RadioShack) found itself at a crossroads. Coming off the enormous hype of the CB radio craze — which it benefited from by selling truckloads of CB radios — it found itself looking for a way to replace the declining profits from those once hot radios.

A Tandy executive named John Roach found one in-house, when he noticed a number of Tandy engineers ordering something called a MITS Altair 8800.

As a result of a cover story in the January 1975 issue of Popular Electronics, The Altair was the first microcomputer to achieve any sort of popular success. But it was a kit, which required serious soldering skills to assemble. And even then, it was basically a box with lights and switches on the front. It also needed fairly healthy programming skills, a spare teletypewriter, paper tape reader, and a spare TV monitor to really make it work.

Seeing an electronics niche to exploit, Roach hired Steve Leininger, the head of the Homebrew Computer Club of Palo Alto, CA, to design what eventually became the TRS-80 Microcomputer System Model I. (Those TRS initials came, of course, from Tandy RadioShack. The 80 referred to the unit's 1.77 MHz Zilog Z-80 processor. The Model I designation didn't arrive until the summer of 1979, when Tandy introduced TRS-80 Model II.)

Only Leininger thought it would succeed. He told Roach, Charles Tandy himself, and Lewis Kornfeld, president of RadioShack that the TRS-80 would probably sell 50,000 units. Tandy and Kornfeld were thinking it would sell somewhere closer to the neighborhood of 3,000. Roach's response to Leininger's estimate was unprintable in a family magazine, but euphemistically referred to an equestrian methane emission.

On Wednesday, August 3, 1977, at a press conference at Manhattan's Warwick Hotel, Tandy released the TRS-80, with a retail price of $599.95. Despite the previous success of the Altair, despite the high-tech buzz that Star Wars was generating at the box office that summer, the press response — as usual when presented with something revolutionary — was a collective yawn. 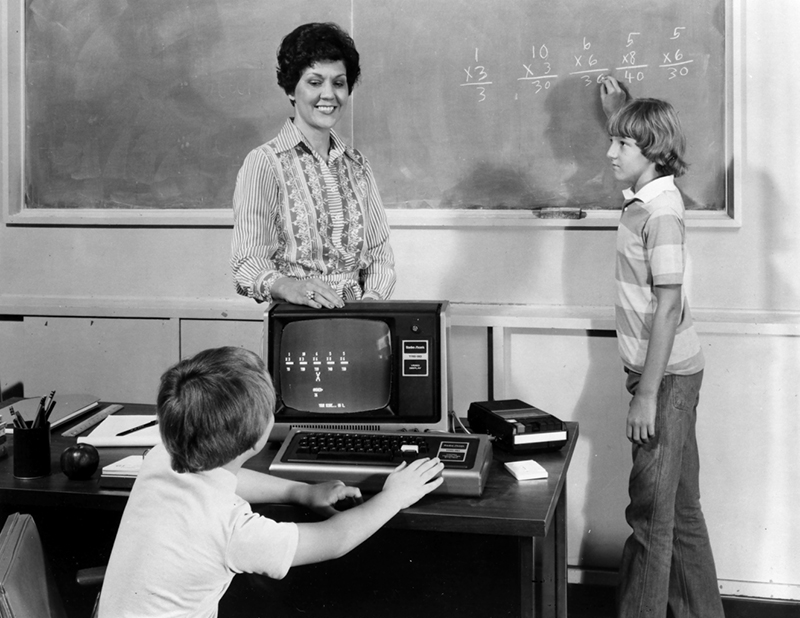 Fortunately, the public response was 180 degrees different. They flooded RadioShack stores with orders, selling 10,000 units in the first month, and a total of 55,000 in the first year — even more than Leininger's prediction. The TRS-80 was the most expensive single item RadioShack had ever carried to that date, and RadioShack even required a $100.00 deposit to order the computer. Even so, they couldn't keep up with the demand, resulting in the units being backordered for several months.

The Model I was finally discontinued in January of 1981 due to its failure to meet the FCC's Radio Frequency Interference rules. By the time it was discontinued, it had sold over 200,000 units.

Compared to the Apple II, released just a few months earlier that same year, the TRS-80's aesthetics left much to be desired. The Apple II was a much more elegant piece of engineering. Whereas the Apple II came in a sleek white case, and screamed simplicity and ease of use (right down to the "A is for Apple" name), the TRS-80's aesthetics were basically non-existent. The monitor was simply a recycled black and white TV with its tuner removed, the CPU board of the computer was contained in the keyboard unit, and it first shipped with only four or 16 kilobytes of RAM.

Originally, the TRS-80 shipped with a very limited form of the computer language BASIC. Eventually, the ROM on the Model I was upgraded to allow for a 12K-sized Level 2 BASIC, which allowed for more sophisticated programming, although the TRS-80s it ran on saved those programs to a cassette recorder. (RadioShack would eventually make floppy disks available for the unit, which would sell for a staggering $500.00 each.) Level 2 BASIC and 16K of RAM would become the standard configuration for Model Is.

Not long after releasing the Model I, Tandy created a $299.00 Expansion Interface for the unit, basically a squat case that fit under the monitor, molded in the same battleship gray that the rest of the TRS-80 came in. The Expansion Interface allowed the RAM to be upgraded to a bitchin' 32 or even 48K capacity. It also allowed for the use of two cassette tape units, a printer port, a floppy disk controller (which controlled up to four floppy disk drives), and a serial port. 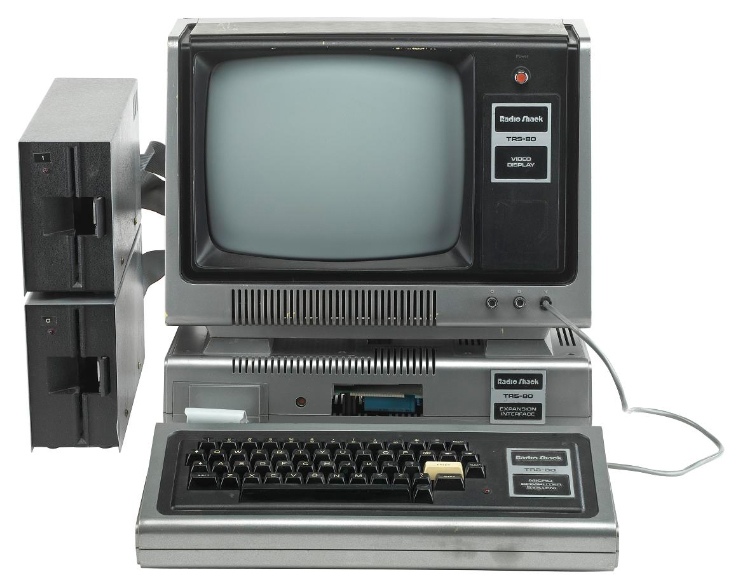 One problem with the Expansion Interface was that the connectors on its 40-conductor ribbon cable — which interconnected with the CPU/keyboard — easily attracted dirt. On his "TRS-80 Home Page" site www.kjsl.com/trs80/index.html), Pete Cervasio wrote, "There was nothing more frustrating than to have a large program typed in only to have the machine decide it wanted to reset itself. The other problem was flaky connections at the serial port board.

All these contributed to the name 'TRaSh-80.' The interconnect problem was bad enough to give rise to several companies that sold gold-plated connectors that could be soldered to the machine."

The Expansion Interface also allowed a modem to be plugged into the unit. I'll never forget going online to my first BBSs and even CompuServe in its early days of offering services to individual computer users. (Like many of the TRS-80 customers that Tandy originally marketed to, I had a CB radio in the mid-1970s. The thought of "online CB," which CompuServe was promoting — and to this day, typing "GO CB" in CompuServe will take you to their chat rooms — was just irresistible.)

Besides BASIC, programs to drive modems, and early spreadsheet and word processing programs (all of which printed out to a dot matrix printer), a hugely popular series of games for the TRS-80 were Scott Adam's Adventure series.

These text-based games were the direct successors to the text-based adventure games that ran on large university mainframes in the 1970s, and amazingly enough, up until the late 1990s, on CompuServe. Adams' original TRS-80 Adventure games can all be downloaded in versions playable on Windows PCs from his web site www.msadams.com/.

There's a Model I (with Expansion Interface and Floppy Drives) currently housed in the American History Museum at the Smithsonian Institute, which speaks volumes about its pioneering silicon spadework in the late 1970s. I'd say it's probably a tie between how many of today's computer users cut their teeth on the TRS-80 as compared to the Apple II. The TRS-80s that came out of Fort Worth, TX weren't as sophisticated or flashy as their West Coast cousins, but they could provide an amazing amount of computing power to a neophyte. And they could be souped up to provide even more.

They really weren't TRaSh — for their day, they were terrific!  NV